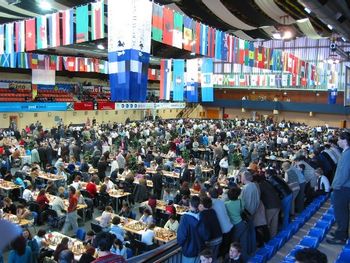 The Chess Olympiad is a biennial chess tournament in which teams from all over the world compete against each other. The event is organised by FIDE, which selects the host nation.

Birth of the Olympiad

The first Olympiad was unofficial. For the 1924 Olympics an attempt was made to include chess in the Olympic Games but this failed because of problems with distinguishing between amateur and professional players.[1] While the 1924 Summer Olympics was taking place in Paris, the 1st unofficial Chess Olympiad also took place in Paris. FIDE was formed on Sunday, July 20, 1924, the closing day of the 1st unofficial Chess Olympiad.[2]

FIDE organised the first Official Olympiad in 1927 which took place in London.[1] The Olympiads were occasionally held annually and at irregular intervals until World War II; since 1950 they have been held regularly every two years.[1]

Chess is a recognized sport by the International Olympic Committee[3] with FIDE being the recognized International Sports Federation for chess since June 1999.[3][4][5][6] As a member of the International Olympic Committee, FIDE adheres to its rules, including controversially having doping tests.[7][8][9][10] The prospects of chess becoming an Olympic sporting event at some future date remain unclear. The naming of FIDE's team championship as the "Chess Olympiad" is of historical origin and implies no connection between this event and the Olympic Games.

Each FIDE recognized chess association can enter a team into the Olympiad (for the UK one team for each of the four countries plus Guernsey and Jersey can enter a team separately).[1] Each team is made of up to five players, four regular players and one reserve (prior to the tournament in Dresden 2008 there were two reserves[11]).[1] Initially each team played all other teams but as the event grew over the years this became impossible.[1] At first team seeding took place before the competition.[1] Later certain drawbacks were recognized with seeding and in 1976 a Swiss tournament system was adopted.[1]

The 2010 Olympiad was held in Khanty-Mansiysk, Russia. The 2012 Olympiad is going to be held in Istanbul, Turkey and the 2014 Olympiad in Tromsø, Norway. 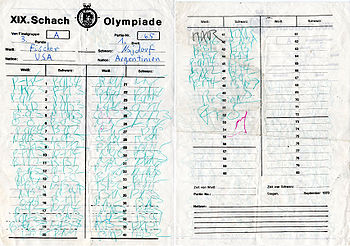 Bobby Fischer's score card from his round 3 game against Miguel Najdorf in the 1970 Chess Olympiad. 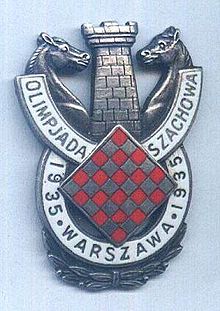 Symbol of 6th Chess Olympiad in Warsaw 1935 by J.Steifer

Olympiads and top results in the open section

* In 1976 the USSR and other communist countries did not compete for political reasons.

The best individual results in order of overall percentage are: 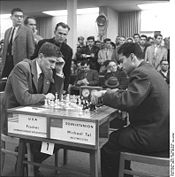 Fischer and Tal at the 1960 Olympiad