Khortytsia (Ukrainian: Хо́ртиця, Khortyts'a, Russian: Хо́ртица, Khortitsa, Polish: Chortyca) is a national cultural reserve (sanctuary) located on one of the largest islands of the Dnieper river, in Ukraine.

The island has played an important role in the history of Ukraine, specially in the history of the Zaporozhian Cossacks. This historic site is located within the city limits of Zaporizhia city. It extends from northwest to southeast for more than 12 km (7.5 mi) with an average width around 2.5 km (1.6 mi). The island has unique flora and fauna, including oak groves, spruce woods, meadows, and steppe. The northern part of the island is very rocky and high (rising 30 m (98 ft) above the river bed) in comparison to the southern part, which is low, and often flooded by the waters of the Dnieper. 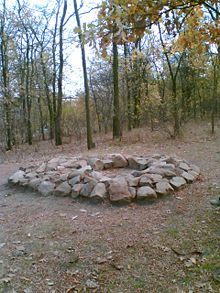 A Neolithic altar reconstructed at Khortytsia.

Zaporizhia (direct translation is "beyond the rapids") takes its name from an area downstream of the Dnieper river after the nine rapids. In 1930s when the Dnieper Hydroelectric Station was built, these rapids were flooded. Only granite cliffs, rising to the height of 50 m (160 ft), testify to the original rocky terrain of the region.

Khortytsia has been continuously inhabited during the last five millennia. Other islands in the immediate vicinity also contain indications of intensive occupation during the Proto-Indo-European and Scythian periods. The island of Small Khortytsia is known for its Scythian remains and a derelict Cossack fortress. The islet of Sredeny Stih (to the northeast of Khortytsia), excavated during construction of the hydroelectric station in 1927, gave its name to the Seredny Stih culture.

In the Early Middle Ages, Khortytsia was a key centre for the trade route from the Varangians to the Greeks. In his treatise De Administrando Imperio, Emperor Constantine VII mentions the island of St. George immediately downstream from the rapids. He reports that, while passing through the rapids, the Rus would be easy prey for the nomadic Pechenegs. Indeed, the Kiev Rus' prince Svyatoslav I was attacked and killed during his attempt to cross the rapids in 972.

The very first stronghold known as a Sich was located on the island of Small Khortytsia (Mala Khortytsia Island) and was established by the Volhynian prince Dmytro Vyshnevetsky. The Small Khortytsia Island is 20 times smaller than Khortytsia itself. The first Khortytsia Sich existed six years (1552–1558). There are few others locations downstream past the rapids (Zaporizhia area) where the Zaporizhian Sich was located. There are eight of them: Bazavluk (1593–1630), Mykytyn (1628–1652), Chortomlyk (1652–1709), Kamin (1709–1711), Oleshkiv (1711–1734), Pidpilna (1734–1775). All these places were at river crossings. The uprising led by Bohdan Khmelnytsky was started at the Mykytyn Sich in 1648. Legends state, that cossacks wrote the notorious Reply of the Zaporozhian Cossacks to Sultan Mehmed IV of the Ottoman Empire on Khortytsia. In the 1775, the Sich was destroyed by the Russian general Tekhely on the order of Catherine the Great. The Zaporozhian Cossacks as a result were displaced, many eventually settling on the Kuban river in the Caucasus area. These Cossacks became known as Kuban cossacks. A part of the Zaporozhian Cossacks escaped to beyond the Danube to become vassals of the Ottoman Sultan. They dwelt at mouth of the Danube river. In 1830 many of these Cossacks moved and established a new Sich on the Azov sea shore (between Mariupol and Berdiansk).

The last Kosh Otaman (leader) of Zaporizhian Sich Petro Kalnyshevsky was imprisoned at Solovetsky Island Monastery. At that time he was 85 years old. After 25 years in prison he was released and died almost blind at the monastery at age of 113 years.

In 1789, Danzig Mennonites from Prussia were invited by the czar to form settlements on the vast steppes of the Russian Empire. One of these settlements was located on the island of Khortytsia. They farmed on the rich island soil. Some of their profitable business was trade in lumber from the Khortytsia groves and woods. In 1916 the German colonists sold Khortytsia Island to the Olexandrivsk (Alexandrovsk) city council (see Chortitza Colony). It was a declared a national sanctuary.

View of the Dnieper Hydroelectric Station from Khortytsia.

The major part of the sanctuary covers the Zaporizhian Cossack Museum that includes the Cossack horse show. The museum building is modern, nestling low in the landscape with dramatic views of the Dnieper Hydroelectric Station to the north. The museum was built on October 14, 1983 as the Museum of Zaporizhia History although its project was approved by the Ministry of Culture and Derzhbud of Ukraine in December 1970. The expo area of the museum was accounted for 1,600 m2 (17,000 sq ft) portraying following themes: Khortytsia in ancient times, history of Zaporizhian Cossacks, history of Zaporizhia at times of construction of socialism. There also existed four dioramas: "Battle of Sviatoslav at rapids" (author - M.Ovyechkin), "Uprising of the impoverished cossacks at Zaporizhian Sich in 1768" (M.Ovyechkin), "Construction of Dnieper HES" (V.Trotsenko), "Night storm of Zaporizhia city in October 1943" (M.Ovyechkin). Part of the museum became also the Zaporizhian Oak located at the Upper Khortytsia. In 1992 the exposition of the museum was redesigned.

The museum contains exhibits dating from the Stone Age through the Scythian period (c.750 - 250 BC) down to the 20th century.

On Khortytsia at Savutyn summit close to the same name the ravine is a 74.5m tall three electrical transmission towers, the such called Zaporizhzhia Pylon Triple, which is a part of a 150 kV powerline crossing Dnieper river. [1]