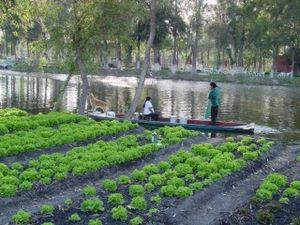 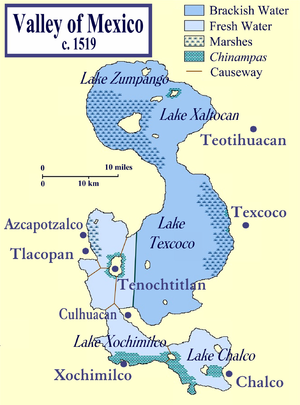 The lake system within the Valley of Mexico at the time of the Spanish Conquest, showing distribution of the chinampas.

Chinampa is a method of ancient Mesoamerican agriculture which used small, rectangle-shaped areas of fertile arable land to grow crops on the shallow lake beds in the Valley of Mexico.

Often referred to as "floating gardens," chinampas were artificial islands that usually measured roughly 30 × 2.5 m (98 × 8.2 ft), although they were sometimes longer. They were used by the ancient Aztec Indians. They were created by staking out the shallow lake bed and then fencing in the rectangle with wattle. The fenced-off area was then layered with mud, lake sediment, and decaying vegetation, eventually bringing it above the level of the lake. Often trees such as āhuexōtl (Salix bonplandiana)[1] and āhuēhuētl (Taxodium mucronatum)[2] were planted at the corners to secure the chinampa. Chinampas were separated by channels wide enough for a canoe to pass. These "islands" had very high crop yields with up to seven crops a year.[3]

The earliest fields that have been securely dated are from the Middle Postclassic period, 1150 – 1350 CE. Chinampas were used primarily in Lakes Xochimilco and Chalco near the springs that lined the south shore of those lakes. The Aztecs not only conducted military campaigns to obtain control over these regions but, according to some researchers, undertook significant state-led efforts to increase their extent.[4] Chinampa farms also ringed Tenochtitlán, the Aztec capital, which was considerably enlarged over time due to the use of chinampas. Smaller-scale farms have also been identified near the island-city of Xaltocan and on the east side of Lake Texcoco. With the destruction of the dams and sluice gates during the Spanish conquest of Mexico, many chinampas fields were abandoned, although remnants are still in use today in what remains of Lake Xochimilco.

The primary chinampas crops were maize, beans, squash, amaranth,[citation needed] tomatoes, and chili peppers, although chinampas were also used to grow flowers.[citation needed] It is estimated that food provided by chinampas made up one-half to two-thirds of the food consumed by the city of Tenochtitlán. Chinampas were fertilized using lake sediments as well as human excrement.

The word chinampa comes from the Nahuatl word chināmitl, meaning "square made of canes". Was also used to sell and have a trade item to become wealthy.