Morbid Angel is an American death metal band based in Tampa, Florida. UK music magazine Terrorizer ranked one Morbid Angel album in its “Top 40 greatest death metal albums”, with their 1989 debut Altars of Madness appearing at number 1. Decibel Magazine also rated guitarist Trey Azagthoth as the number one “death metal guitarist ever.” The band′s songs are complex in arrangement, owing to the considerable technical skills of both Azagthoth and drummer Pete Sandoval, who also played in the grindcore death metal band Terrorizer. According to Nielsen SoundScan, Morbid Angel is the third best-selling death metal band in the United States with sales of over 445,000;[1] with their third album Covenant being the best-selling death metal album of all time with over 127,000 units sold.[2]

Morbid Angel was formed in 1984 in Tampa, Florida. The band made their debut in 1987 on the New Renaissance Records record label. They recorded their debut album, Abominations of Desolation, in 1986, but the band was unsatisfied with the final product and it remained unreleased until 1991. Their first proper studio album, Altars of Madness, was released in 1989.

Morbid Angel was one of the original death metal bands signed to Earache Records, and was also influential in the transition of death metal from its thrash metal roots to its current form by incorporating guttural vocals, up-tempo blast beats, atonality in guitar soloing, and dark, chunky, mid-paced rhythms. They were also the first death metal band to have a touch of mainstream success in connection with being signed to Giant Records in 1992 and having the music video for the song "God of Emptiness" shown on an episode of Beavis and Butt-head.

The band's original lyrical themes focused mostly on Satanism, Occultism and anti-Christian subject matter, but from Blessed Are the Sick onward, the lyrics moved toward the ancient Sumerian gods. Much of this is a nod to the Simon Necronomicon, which was influenced by Sumerian mythology, the author H. P. Lovecraft,[3] and fascination with the Roman Empire. However, some anti-religious elements continue to permeate the lyrics. Their albums are notable for being released in alphabetical order (their first album starts with the letter A, the second with B, etc.). Guitarist Trey Azagthoth commented in an interview that it was a coincidence with the first two albums, but has been done consciously since then.[4]

Morbid Angel's appearance on some of the mid-summer 2008 European festivals was announced as a "short break from writing and pre-production of their new 8th studio album".[5] In May 2008, it was announced that Thor Anders Myhren of Zyklon would be the band's new touring guitarist.[6] Myhren will also appear on the new album. During European tours and festivals in 2008, a new song entitled "Nevermore" was played from the forthcoming album.

On March 5, 2011, the band headlined the Scion Rock Fest in Pomona, California. This performance was their first in the US in six years, aside from a one-off show in Los Angeles in May 2009.[7] On March 18, 2010, the band announced that Tim Yeung would play drums on the upcoming album, allowing Pete Sandoval to recover from back surgery.[8] On June 22, 2010, the band entered the studio to begin the recording of their new full-length album.[9] On March 9, 2011, Morbid Angel confirmed that their new album would be called Illud Divinum Insanus.[10] The album was released on June 7, 2011 on Season of Mist.[9][10] 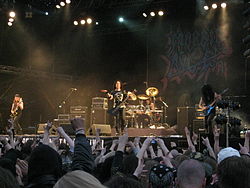