Meadowbank Stadium is a multi-purpose sports facility located at Meadowbank, in Edinburgh, Scotland. It hosted the Commonwealth Games of 1970 and 1986. 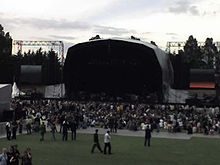 Meadowbank Stadium prior to performance by Radiohead at the 2006 T on the Fringe, taken from the main seating area

The capacity of the stadium is 16,500. The grandstand has 7,500 seats, and uncovered benches stretch around the rest of the track. The sports complex and adjacent pitches to the east covers land formerly occupied by Old Meadowbank Stadium. The stadium itself contains an eight lane, 400 metre running track, with a grass pitch within this. There is also a velodrome on the site. Underneath the stand is a covered 100 metre, eight-lane track.

5-aside pitch at Meadowbank

Meadowbank Thistle played at the stadium until the club relocated to the new town of Livingston and were renamed Livingston F.C. in 1995. Meadowbank is often cited as one of the worst stadiums used in the Scottish Football League due to the lack of atmosphere in the ground. This was caused by the unused seating, with most fans located on one side of the ground, and the running track created a great distance between the fans and the pitch.

Scottish Premier League side Hibernian play some of their reserve team matches at Meadowbank.

T on the Fringe

Meadowbank was used as a 25,000 capacity concert venue during T on the Fringe, an annual music festival. Muse, My Chemical Romance, Snow Patrol, Radiohead, Pixies, Foo Fighters, Nine Inch Nails, Kaiser Chiefs and Razorlight all played the venue between 2005 and 2007. In 2008, T on the Fringe was renamed The Edge Festival and the stadium was no longer used as one of the main venues.

Meadowbank stadium has basketball facilities in three of its large halls, however they are only rarely available to the public. They are usually occupied by clubs or individuals for badminton, judo, hockey and football.

The only basketball facility which is easily accessible and affordable for a small group of people (£2 per person, compared to £48 for booking a hall), is a small squash court with a basket mounted on the wall. The size of this court and the bad condition of its roof make it unsuitable for basketball.

Edinburgh Rocks basketball team used one of the large halls until they moved to the Braehead Arena, and were renamed Scottish Rocks.

Meadowbank velodrome is home to the East of Scotland regional track cycling academy. The wooden track is 250 metres long and built using West African timber.[1] It was built by Schuermann Architects of Germany.[2] in 1985 for the 1986 Commonwealth Games.[3] It is where many of Scotland's greatest cyclists started out, including Chris Hoy and Craig MacLean.

From the 2007 season, the Edinburgh Wolves American Football team have played their home matches at the stadium. [4]

The Old Meadowbank was previously known as the Leith Athletic ground. It should not be confused with New Meadowbank, the running track and sports field upon which the present stadium is sited.

Old Meadowbank was a Motorcycle speedway that ran from 1948 until 1967 and the stadium was located between what is the new Meadowbank Stadium and the Meadowbank Velodrome, roughly perpendicular to where the 5-aside football pitch at Meadowbank sits today. Old Meadowbank was home to speedway team the Edinburgh Monarchs [1]. The sport stopped in 1954, when the post-war entertainment tax started to make the sport unprofitable. Whilst the Monarchs of this era achieved little as a team, they did introduce Aussie Jack Young to UK speedway. Young won the World Championship in 1951 as a Monarchs rider.

Meadowbank was also the track where the 1955 and 1962 World Champion Peter Craven of England lost his life in a freak accident on September 20, 1963. While taking evasive action to avoid hitting fallen race leader George Hunter who had suffered engine failure, Craven hit the fence. Craven suffered serious head injuries in the crash and was rushed to hospital where his family remained at his bedside until he died later that night.

The entertainment tax was later scrapped, and the sport was reintroduced to Edinburgh in 1960. The track was used for training purposes for a spell in the late 1950s and 1959 an Edinburgh Students Charites meeting was staged at the track. The Monarchs of the 1960s were founder members of the Provincial League (1960 - 1964) and founder members of the British league in 1965. The Monarchs were forced to leave Old Meadowbank in 1967 to allow the stadium to be re-developed for the 1970 Commonwealth Games. Speedway was not incorporated in the new stadium as the Government of the day would not fund stadiums which would be used by professional sports.

The displaced Monarchs raced at Cliftonhill in Coatbridge for two seasons before they closed down when the promotion sold the licence to a consortium who re-opened Wembley Stadium for speedway.

Speedway was revived in Edinburgh at Powderhall which operated 1977 to 1995.

The Monarchs are now based at the Armadale Stadium, on the eastern outskirts of Armadale in West Lothian.

In 2006 the City of Edinburgh Council decided to demolish Meadowbank Stadium and to replace it with a smaller community facility on the east side of the city. A smaller sports centre was to be built to the west of the city, probably in Sighthill. This proposal was met with opposition from users of the facility.

Thousands of people have shown their opposition to the proposal to build hundreds of flats on the Meadowbank site, by signing petitions, sending objections, attending public meetings and marching to demand that Meadowbank is saved and refurbished. These demonstrations of public opposition have led the Council to look at ways to refurbish the training facility[citation needed].

The proposal is also opposed by those who support retention of the stadium to be used for speedway and greyhound racing. The move has been further cast into doubt due to delays with the Sighthill project, uncertainty over the future of Edinburgh Rugby (who were to have been a major tenant), and possible moves to upgrade Scotstoun athletics stadium in Glasgow as an alternative.

On March 13th 2008, Edinburgh Council voted to sell the land that is occupied by Meadowbank stadium and build a smaller sports facility on east of the site. (Indicative diagrams). (National and Regional Sports facilities progress report).

It was announced on 28 October 2008 that X-Factor winner Leon Jackson would be playing the stadium's annual fireworks display on 5 November 2008. Jackson is one of many campaigning to save the stadium.[5]