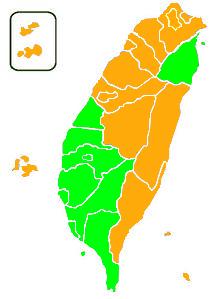 The ruling ran Vice President for President and Premier for Vice President. Both were career civil servants and Lien, originating from the Taiwanese aristocracy, was seen as aloof and unable to empathize with the common people.

Though more popular and consistently ranked higher in the polls, the outspoken former Taiwan Governor James Soong failed to gain the Kuomintang's nomination. As a result, he announced his candidacy as an independent candidate. The Kuomintang responded by expelling Soong and twenty one of his allies in November 1999. It is a very common belief by KMT supporters that President was secretly supporting Chen Shui-bian, and purposely supported the less popular Lien in order to split the Kuomintang, and this belief was given a great deal of credibility after the 2000 election with Lee's defection to the . Soong, a , tried to appeal to the native Taiwanese by nominating pro-independence surgeon as his running-mate.

In December 1999, the began to attack Soong's integrity. They sued Soong for theft, alleging that as party Secretary-General, he stole millions of Taiwan dollars in cash intended for the family of the late President and hid the money in the Chunghsing Bills Finance Co. Soong defended himself by saying he was acting under Lee's direction, but his story was largely unpersuasive. Initially leading in the polls, Soong lost by just over 300,000 votes, and the financial scandal that tarnished his image as a clean politician likely led to this outcome.

The Democratic Progressive Party ran former Mayor Chen Shui-bian and magistrate for vice president. Having lost the 1996 election by a landslide, the DPP in May 1999 moderated it stance by issuing the "Resolution on the Future of Taiwan." The resolution accepted the status quo and promoted the moderate view that Taiwan was already independent, so any formal declaration would not be urgently necessary. Indeed, Chen pledged the during his campaign. The Chen-Lu ticket also promised to be more aggressive in fighting black gold, to provide more funding for social services, and to be more environmentally friendly, such as opposing to nuclear power. The last minute endorsement of Chen Shui-bian by President of the and Nobel laureate is also thought to have played a role in his election.

Former Democratic Progressive Party Chairman , who had been expelled from the party he had co-founded, ran as an independent with New Party legislator as his running mate. As DPP Chairman, Hsu had moderated the platform of the party, promoting reconciliation with the and the opening of direct links, a move, ironically, not supported by President Lee. During the 2000 campaign, the Hsu-Chu ticket promoted reunification under '' and opposed a plebiscite on independence.

The New Party nominated independent social commentator for president and legislator Elmer Fung for vice president. Li, who supported 'one country, two systems', said he took the election as an opportunity to "educate" the people in Taiwan. Both he and his party publicly encouraged people to vote for James Soong to the point of stating during the presidential debates that he was not planning to vote for himself and that people should vote for Soong so that the pro-reunification vote would not be split.

All of the candidates promised to work towards opening the , a largely popular measure.

Shortly before the election, the leaders of the attempted to influence the outcome, warning that the PRC would not "sit idly by" if Taiwan moved towardsindependence and that "independence means war." Following the election, PRC analysts reached the conclusion that the PRC statements had actually been counterproductive and helped Chen to win; consequently, the PRC avoided making such an open attempt to influence the 2004 elections.

Chen's victory had neither been expected, nor predicted. The split of the pro- vote between James Soong and Lien Chan, who together polled nearly 60% of the vote (compared to Chen's 39%), played a large role in pro- Chen's victory. Lee Yuan-tseh's endorsement, Soong Chu-yu's financial scandals, and last minute reactions from the PRC tipped to balance to Chen's favor.

As the results were announced, several thousand protestors, mostly Soong supporters who were angered that their candidate did not receive the KMT nomination and who believed Lee had intentionally tried to sabotage the pro-reunification vote, gathered outside the KMT headquarters in Taipei and demanded Lee Teng-hui resign as Chairman. Lee promised to resign at the party congress in September 2000, but this was not enough. Though the protest was without permit and technically illegal, the government did not break it up and Taipei Mayor joined the crowd on the first night. The protestors blocked the entrances to the building and kept Lee holed in his office for hours until riot police with water cannon were able to open a path for the motorcade. Protestors also dragged presidential advisor out of his car and beat him. The protests ended in success on when Lee resigned as KMT Chairman and was replaced by Lien.

On the same day, Soong announced the formation of the People First Party. In the following party congress, Lien Chan was able to achieve Lee's expulsion and began to move the party back towards a reunificationist platform. Lee and his supporters formed the radical pro-independence .

To avoid a repeat of the 2000 split, Lien and Soong agreed to run on a single ticket as president and vice president, respectively, in the 2004 election. The KMT and PFP also cooperated in subsequent executive elections under the . This, however, did not prevent Chen from winning re-election.