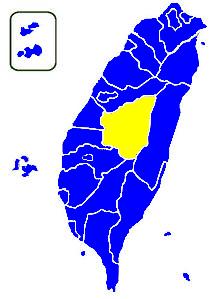 map_size = 250px
map_caption = Lee Teng-hui (blue) vs. Lin Yang-kang (yellow). Although the DPP was the runner-up, it did not win any county or city in Taiwan.
title = President
before_election =
before_colour = 000099
after_election =
after_colour = 000099
before_party = Kuomintang
after_party = KuomintangThe Election for the 9th-term President and Vice-President of the Republic of China (第九任中華民國總統 、副總統選舉), the first ever direct elections for President and Vice President of the on , occurred on , . The previous eight ROC presidential and vice presidential s under the 1947 Constitution were by the deputies of the National Assembly.

Incumbent of the ruling won a majority of 54% of the votes following missile tests by the intended to intimidate the Taiwanese electorate against him.

The ruling nominated in at its 14th Party Congress after plans to institute a closed primary system by his opponents were thwarted. As his running mate, Lee chose , who promised to resign as Premier if he were elected Vice President.

The Democratic Progressive Party conducted an extensive nomination process: the presidential candidate was selected after two rounds of voting and fifty public debates by the two finalists. , , , and contended for this position. The seventy-two-year-old Peng emerged victorious and nominated legislator to be his running mate. Peng opposed trade with unless the PRC promised to "treat Taiwan as an equal." Though he argued that the would lead to another , he took the position that Taiwan was already "de facto" independent so a formal declaration of was unnecessary unless the PRC attacked.

Former Taiwan Provincial Governor ran as an independent with former Premier as his running mate. After the pair registered as candidates on November 27, 1995, a small protest in demanded their expulsion from the KMT. On the recommendation of the KMT Disciplinary Committee, their party memberships were "cancelled" (a step short of "expelled") in December for "viciously attacking" Lee Teng-hui and "seriously damaging the party's image and prestige." They were endorsed by New Party after its own nominee dropped out. Lin and Hau likewise campaigned on behalf of the New Party. They supported the One-China Principle and favored opening direct links with the mainland. They argued that the KMT was too corrupt to govern.

A second independent ticket consisted of former Control Yuan President for President and Control Yuan Member for Vice President. Chen Li-an, the son of former Premier and Vice President , used his background (lay leader of the order) and stressed moral purity and honest government. He walked for eighteen days wearing a famer's straw hat to spread his views.

From to , the sent within 25 to 35 miles (just inside the ROC's territorial waters) off the ports of Keelung and Kaohsiung. This action was intended to intimidate the Taiwanese electorate into voting against Lee and Peng, which Beijing branded "absolutely identical in attempting to divide the motherland." Similarly, Chen Li-an warned, "If you vote for Lee Teng-hui, you are choosing war." The crisis came to an end when two U.S. battle groups were positioned near Taiwan.

Lee, who told his people to resist "state terrorism," was boosted in popularity by the widespread anger (as opposed to fear) caused by the missile tests. Most analysts believed that Lee was boosted 5% in the polls, just enough to have earned him a majority (as opposed to a plurality) in the election.