The raspberry or hindberry is the edible fruit of a multitude of plant species in the genus Rubus, most of which are in the subgenus Idaeobatus; the name also applies to these plants themselves. Raspberries are perennial, with woody stems. 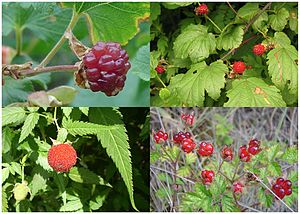 Examples of raspberry species in Rubus subgenus Idaeobatus include:

Several species of Rubus are also called raspberries that are classified in other subgenera, including:

Fruit of red raspberry (Rubus idaeus) in the Czech Republic 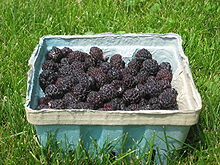 Fruits of a golden or yellow raspberry cultivar

Raspberries are an important commercial fruit crop, widely grown in all temperate regions of the world.

Many of the most important modern commercial red raspberry cultivars derive from hybrids between R. idaeus and R. strigosus.[1] Some botanists consider the Eurasian and American red raspberries to all belong to a single, circumboreal species, Rubus idaeus, with the European plants then classified as either R. idaeus subsp. idaeus or R. idaeus var. idaeus, and the native North American red raspberries classified as either R. idaeus subsp. strigosus, or R. idaeus var. strigosus. Recent breeding has resulted in cultivars that are thornless and more strongly upright, not needing staking.

The black raspberry, Rubus occidentalis, is also occasionally cultivated in the United States, providing both fresh and frozen fruit as well as jams, preserves, and other products, all with that species' distinctive, richer flavour.

Purple raspberries have been produced by horticultural hybridization of red and black raspberries, and have also been found in the wild in a few places (for example, in Vermont) where the American red and the black raspberries both grow naturally. The botanical name Rubus × neglectus applies to these naturally occurring plants as well as horticulturally produced plants having the same parentage. Commercial production of purple-fruited raspberries is rare.

Both the red and the black raspberry species have albino-like pale-yellow natural or horticultural variants resulting from presence of recessive genes that impede production of anthocyanin pigments.[citation needed] Fruits from such plants are called golden raspberries or yellow raspberries; despite their similar appearance, they retain the distinctive flavour of their respective species (red or black). Most pale-fruited raspberries commercially sold in the eastern United States are derivatives of red raspberries. Yellow-fruited variants of the black raspberry are sometimes grown in home gardens.

Red raspberries have also been crossed with various species in other subgenera of the genus Rubus, resulting in a number of hybrids, the first of which was the loganberry. Later notable hybrids include boysenberry (a multi-generation hybrid), and Tayberry. Hybridization between the familiar cultivated red raspberries and a few Asiatic species of Rubus has also been achieved.

Raspberries are grown for the fresh fruit market and for commercial processing into individually quick frozen (IQF) fruit, purée, juice, or as dried fruit used in a variety of grocery products. Traditionally, raspberries were a mid-summer crop, but with new technology, cultivars, and transportation, they can now be obtained year-round. Raspberries need ample sun and water for optimal development. Raspberries thrive in well-drained soil with a pH of between 6 and 7 with ample organic matter to assist in retaining water.[2] While moisture is essential, wet and heavy soils or excess irrigation can bring on Phytophthora root rot which is one of the most serious pest problems facing red raspberry. As a cultivated plant in moist temperate regions, it is easy to grow and has a tendency to spread unless pruned. Escaped raspberries frequently appear as garden weeds, spread by seeds found in bird droppings.

An individual raspberry weighs about 4 g, on average[3] and is made up of around 100 drupelets,[4] each of which consists of a juicy pulp and a single central seed. Raspberry bushes can yield several hundred berries a year. Unlike blackberries and dewberries, a raspberry has a hollow core once it is removed from the receptacle.

Raspberries contain significant amounts of polyphenol antioxidants such as anthocyanin pigments linked to potential health protection against several human diseases.[5] The aggregate fruit structure contributes to its nutritional value, as it increases the proportion of dietary fibre, placing it among plant foods with the highest fibre contents known, up to 20% fibre per total weight. Raspberries are a rich source of vitamin C, with 30 mg per serving of 1 cup (about 50% daily value), manganese (about 60% daily value) and dietary fibre (30% daily value). Contents of B vitamins 1-3, folic acid, magnesium, copper and iron are considerable in raspberries.[6]

Raspberries rank near the top of all fruits for antioxidant strength, particularly due to their dense contents of ellagic acid (from ellagotannins, see for instance raspberry ellagitannin), quercetin, gallic acid, anthocyanins, cyanidins, pelargonidins, catechins, kaempferol and salicylic acid. Yellow raspberries and others with pale-coloured fruits are lower in anthocyanins.

Due to their rich contents of antioxidant vitamin C and the polyphenols mentioned above, raspberries have an ORAC value (oxygen radical absorbance capacity) of about 4900 per 100 grams, including them among the top-ranked ORAC fruits. Cranberries and wild blueberries have around 9000 ORAC units and apples average 2800.[7]

Although there are no clinical studies to date proving these effects in humans, antioxidant and antiproliferative (chemopreventive) effects against cancer have been linked to the amount of phenolics and flavonoids in various foods including raspberries.[8][9][10]

Raspberries are a low-glycemic index food, as are most other berries. 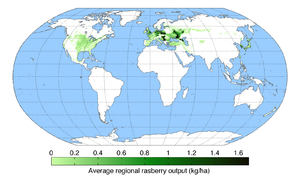 See table and map at right

Raspberry leaves can be used fresh or dried in herbal and medicinal teas. They have an astringent flavour, and in herbal medicine are reputed to be effective in regulating menses.

Raspberries are traditionally planted in the winter as dormant canes, although planting of tender, plug plants produced by tissue culture has become much more common. A specialized production system called "long cane production" involves growing canes for 1 year in a northern climate such as Scotland (UK) or Washington State (US) where the chilling requirement for proper bud break is met early. These canes are then dug, roots and all, to be replanted in warmer climates such as Spain where they quickly flower and produce a very early season crop. Plants should be spaced 1 m apart in fertile, well drained soil; raspberries are usually planted in raised beds/ridges if there is any question about root rot problems.

The flowers can be a major nectar source for honeybees and other pollinators.

Raspberries are very vigorous and can be locally invasive. They propagate using basal shoots (also known as suckers); extended underground shoots that develop roots and individual plants. They can sucker new canes some distance from the main plant. For this reason, raspberries spread well, and can take over gardens if left unchecked.

The fruit is harvested when it comes off the torus/receptacle easily and has turned a deep colour (red, black, purple, or golden yellow, depending on the species and cultivar). This is when the fruits are ripest and sweetest. Excess fruit can be made into raspberry jam or frozen.

Cultivated raspberry, in flower in a garden

Numerous raspberry cultivars have been selected. Raspberries are often propagated using cuttings and will root readily in moist soil conditions. Using cuttings preserves the genotype of the parent, and is the preferred method of propagation when making large plantings[citation needed].

Two types of most commercially grown kinds of raspberry are available, the summer-bearing type that produces an abundance of fruit on second-year canes (floricanes) within a relatively short period in mid-summer, and double- or "ever"-bearing plants, which also bear some fruit on first-year canes (primocanes) in the late summer and fall, as well as the summer crop on second-year canes. Various kinds of raspberries can be cultivated from hardiness zones 3 to 9.

Raspberries are sometimes eaten by the larvae of some Lepidoptera species (butterflies and moths). See list of Lepidoptera that feed on Rubus.

Botrytis cinerea, or Gray Mould, is a common fungal infection of raspberries and other soft fruit. It is seen as a grey mould growing on the raspberries, and particularly affects fruit which is bruised, as it provides an easy entrance point for the spores of B. Cinerea.

Raspberry plants should not be planted where potatoes, tomatoes, peppers, eggplants or bulbs have previously been grown, without prior fumigation of the soil. These crops are hosts for the disease Verticillium Wilt, a fungus that can stay in the soil for many years and can infest the raspberry crop.[11]