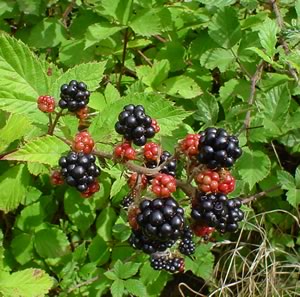 "Rubus" is a large of s in the family , subfamily . Raspberries, blackberries, and dewberries are common, widely distributed members of the genus. Most of these plants have woody stems with prickles like s; spines, bristles, and gland-tipped hairs are also common in the genus. The "Rubus" fruit, sometimes called a bramble fruit, is an aggregate of s.

The blackberries, as well as various other "Rubus" species with mounding or rambling growth habits, are often called s. However, this name is not used for those like the that grow as upright canes, or for trailing or prostrate species such as most dewberries, or various low-growing boreal, arctic, or alpine species.

Examples of the hundreds, if not thousands, of species of "Rubus" include:

The genus also includes numerous hybrids, both natural and bred by man, such as the ("Rubus × loganobaccus").

The genus "" is a very complex one, particularly the / subgenus ("Rubus"), with , , and facultative apparently all frequently occurring, making classification of the great variation in the subgenus one of the grand challenges of . Some treatments have recognized dozens of species each for what other, comparably qualified botanists have considered single, more variable species. On the other hand, species in the other "Rubus" subgenera (such as the raspberries) are generally distinct, or else involved in more routine one-or-a-few taxonomic debates, such as whether the European and American red raspberries are better treated as one species or two. (In this case, the two-species view is followed here, with "Rubus idaeus" and "R. strigosus" both recognized; if these species are combined, then the older name "R. idaeus" has priority for the broader species.)

Molecular data has backed up classifications based on geography and , but following morphological data such as the structure of the leaves and stems does not appear to produce a phylogenetic classification. [cite journal | url = http://www.amjbot.org/cgi/content/full/86/1/81 | title = Phylogeny of Rubus (rosaceae) based on nuclear ribosomal DNA internal transcribed spacer region sequences | author = Lawrence A. Alice and Christopher S. Campbell | journal = American Journal of Botany | year = 1999 | volume = 86 | pages = 81–97 | doi = 10.2307/2656957 ]

The classification presented below recognizes 13 subgenera within , with the largest subgenus ("Rubus") in turn divided into 12 . Representative examples are presented, but there are many more species not mentioned here.