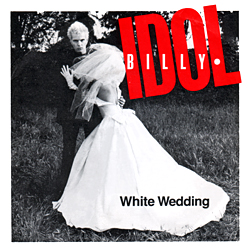 The , featuring Idol attending a gothic , is one of his best-known videos. The bride in the music video is played by Perri Lister, Idol's real-life girlfriend at the time. In a memorable scene from the video, Idol forces the wedding ring onto the bride's finger and cuts her knuckle. Lister insisted that her knuckle actually be cut in order for the scene to appear more realistic. MTV removed this scene from the video. The video was filmed in a real church outside of London. The MTV-edited version of the video is included on the DVD portion of CD/DVD package.

Other versions and appearances

The song has been covered by , Ardor (of ), , Doro, on his album Teenage Stuff Film, , , The Way Of All Flesh and has been featured in the , "" and the TV series, "". It was also sung by , in the 2006 show "80's Hits". It was also performed by Toby Rand on the finale of the television show "Rockstar: Supernova". It was also featured in the skate video . Additionally, the ska band covered it on their album "King Size." n punk rock band recorded a version on their cover album "(Ne) Menjajte Stanicu" ((Do Not) Change The Station). The Christian pop band recorded a version (with lyrics amended to praise the union of matrimony) for their 1985 album "Just Can't Get Enough (Of Jesus!!!)".

"White Wedding" is featured on the fictional , in the , "". In addition, it is covered by the band , on their EP, "". The song was also covered by the band on their recently released album, "Era Vulgaris" as a B-Side. Part of it is included in Franz Ferdinand's cover of ""

The line, "It's a nice day to start again", was featured on the sticker on the front of Billy's 2005 comeback album, "Devil's Playground".

The song is also in Harmonix's .

The popular Canadian teen drama , which is known for naming each episode after an 80s hit song, named a two part episode after this song.