Broom (shrub)
For the brooms of New Zealand, see Carmichaelia.

Brooms are a group of evergreen, semi-evergreen, and deciduous shrubs in the subfamily Faboideae of the legume family Fabaceae, mainly in the three genera Chamaecytisus, Cytisus and Genista, but also in many other small genera (see box, right). All genera in this group are from the tribe Genisteae. These genera are all closely related and share similar characteristics of dense, slender green stems and very small leaves, which are adaptations to dry growing conditions. Most of the species have yellow flowers, but a few have white, orange, red, pink or purple flowers.

Two other close relatives are Ulex (gorse) and Laburnum (laburnum), but these differ more strongly in appearance from the brooms. Some botanists include Podocytisus caramanicus in the genus Laburnum.

All the brooms and their relatives (including Laburnum and Ulex) are natives of Europe, north Africa and southwest Asia, with the greatest diversity in the Mediterranean region. Many brooms (though not all) are fire-climax species, adapted to regular stand-replacing fires which kill the above-ground parts of the plants, but create conditions for regrowth from the roots and also for germination of stored seeds in the soil.

The most widely familiar is common broom (Cytisus scoparius, syn. Sarothamnus scoparius), a native of northwestern Europe, where it is found in sunny sites, usually on dry, sandy soils. Like most brooms, it has apparently leafless stems that in spring and summer are covered in profuse golden-yellow flowers. In late summer, its peapod-like seed capsules burst open, often with an audible pop, spreading seed from the parent plant. It makes a shrub about 1–3m tall, rarely to 4 m. It is also the hardiest broom, tolerating temperatures down to about -25°C.

The largest species of broom is Mount Etna broom (Genista aetnensis), which can make a small tree to 10 m tall; by contrast, some other species, e.g. dyer's broom Genista tinctoria, are low sub-shrubs, barely woody at all.

Broom is used as a food source by the larvae of some Lepidoptera species – see list of Lepidoptera that feed on brooms. 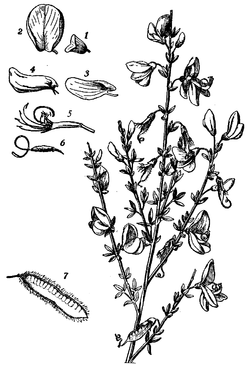 Cytisus scoparius, Common Broom. 1. Two-lipped calyx. 2. Broadly ovate vexillum or standard. 3. One of the alae or wings of the corolla. 4. Carina or keel. 5. Monadelphous stamens. 6. Hairy ovary with the long style, thickened upwards, and spirally curved. 7. Legume or pod.

Brooms tolerate (and often thrive best in) poor soils and growing conditions. In cultivation they need little care, though they need good drainage and perform poorly on wet soils.

They are widely used as ornamental landscape plants and also for wasteland reclamation (e.g. mine tailings) and sand dune stabilising.

In some areas of North America, common broom, introduced as an ornamental plant, has become naturalised and an invasive weed due to its aggressive seed dispersal; it has proved very difficult to eradicate. Similarly, it is a major problem species in the cooler and wetter areas of southern Australia and New Zealand. Biological control for broom in New Zealand has been investigated since the mid 1980s. On the west coast of the United States, French broom (Genista monspessulana), Mediterranean broom (Genista linifolia) and Spanish broom (Spartium junceum) are also considered noxious invasives, as they are quickly crowding out native vegetation, and grow most prolifically in the least accessible areas.

The Plantagenet kings used common broom (known as "planta genista" in Latin) as an emblem and took their name from it. It was originally the emblem of Geoffrey of Anjou, father of Henry II of England. Wild broom is still common in dry habitats around Anjou, France.

Charles V and his son Charles VI used the pod of the broom plant (broom-cod, or "cosse de geneste") as an emblem for livery collars and badges.[5]

Genista tinctoria (dyer's broom, also known as dyer's greenweed or dyer's greenwood), provides a useful yellow dye and was grown commercially for this purpose in parts of Britain into the early 19th century. Woollen cloth, mordanted with alum, was dyed yellow with dyer's greenweed, then dipped into a vat of blue dye (woad or, later, indigo) to produce the once-famous "Kendal Green" (largely superseded by the brighter "Saxon Green" in the 1770s). Kendal green is a local common name for the plant.

The flower buds and flowers of Cytisus scoparius have been used as a salad ingredient, raw or pickled, and were a popular ingredient for salmagundi or "grand sallet" during the 17th and 18th century. There are now concerns about the toxicity of broom, with potential effects on the heart and problems during pregnancy.[6]

In Welsh mythology, Blodeuwedd is the name of a woman made from the flowers of broom, meadowsweet and the oak by Math fab Mathonwy and Gwydion to be the wife of Lleu Llaw Gyffes. Her story is part of the Fourth Branch of the Mabinogi, the tale of Math son of Mathonwy.

A traditional rhyme from Sussex says: "Sweep the house with blossed broom in May/sweep the head of the household away." Despite this, it was also common to include a decorated bundle of broom at weddings. Ashes of broom were used to treat dropsy, while its strong smell was said to be able to tame wild horses and dogs.