Mark Anthony Philippoussis (Greek: Μαρκ Φιλιππούσης; born 7 November 1976) is an Australian tennis player. He turned professional in 1994. His father is Greek, while his mother is of Italian ancestry.

He has had a minor career in modelling and starred in the American reality television dating show Age of Love. He is nicknamed 'the Scud', after the Scud missile.[2] He was educated at Maribyrnong College.[3]

Philippoussis was born in Melbourne and was educated at Maribyrnong College[4] .

Coached by his father, Nick, the right-hander has played tennis since he was six years of age. He was briefly coached by former 1987 Wimbledon champion Pat Cash, which ended in an acrimonious split in 2000.[5] In 1994, he finished third in single ranking for juniors. Philippoussis also finished as junior doubles champion with Ben Ellwood in Australia, Wimbledon, and Italy. He turned professional in 1994.

In 1995, at the age of 19, he was the youngest player in the year-end top 50. In 1996, he reached the 4th round of the Australian Open upsetting Pete Sampras in the 3rd round and in doubles with Patrick Rafter. On 25 May 1997, he recorded a personal best 229.0 km/h (142.3 mph) serve in a game he lost to Albert Costa. During the height of his career, Mark was known as having one of the fastest services in the game.

On 29 March 1999, Philippoussis entered the top 10 for the first time and stayed there for 10 weeks. He advanced to the quarterfinals at Wimbledon in 1999 for the second straight year, where he retired in the second set against Sampras after having won the first set. During that match, Philippoussis suffered a moderate cartilage tear in his left knee and underwent arthroscopic surgery four days later. Sampras later remarked that he "dodged a bullet out there". Philippoussis returned to professional tennis seven weeks later at the Indianapolis Tennis Championships and lost his second round match after receiving a bye in the first round. He did not play again until October in Singapore, where he lost in the second round. He finished 1999 at no. 19.

2000 was the fourth consecutive year in which Philippoussis finished in the top 20, at world no. 11. He reached the fourth round at the Australian Open, losing to eventual champion Andre Agassi. He defeated Sampras, then the world no. 2, 8–6 in the fifth set at the French Open in a first-round match, but lost in the fourth round to Juan Carlos Ferrero. For the third consecutive year, he made it to the quarterfinals at Wimbledon, losing again to Agassi. He appeared in his second Olympic Games in Sydney, losing in the third round to eventual gold medalist Yevgeny Kafelnikov.

Philippoussis finished 2002 in the top 100 (seventh time in eight years), despite not winning a title. He moved from Miami to the San Diego area in September 2002.

Philippoussis has always claimed to be proud of representing his country in Davis Cup, but personal differences with John Newcombe and Tony Roche interfered with his commitment early in his career. Despite several highly publicised feuds, Mark played a large part in giving Australia their 27th Davis Cup triumph—second only to the United States with 31—but it was their first since 1986. In 1999 he defeated Cédric Pioline, 6–3, 5–7, 6–1, 6–2, in Nice, France.

Injuries plagued Mark's availability for Davis cup and was the cause of a public rift between team-mates Patrick Rafter and Lleyton Hewitt. Rafter publicly accused Philippoussis of jerking the team around after he withdrew from a Davis Cup tie in late 2000. Philippoussis said Rafter was ill-informed and upset by the lack of support and understanding from his team-mates.

Knee surgeries forced Philippoussis out of Davis Cup until February 2003. By then, Pat Rafter had retired, and John Fitzgerald and Wally Masur were the new Davis Cup captain and coach. The impact of these changes was instantly recognised, as team harmony was at its highest throughout the year. Philippoussis once again sealed victory for Australia in the Melbourne Final against Spain. Mark beat Spain's Juan Carlos Ferrero in a 7–5, 6–3, 1–6, 2–6, 6–0 battle. Mark suffered a pectoral tear at the end of the second set, which caused him to lose the third and fourth sets. He regrouped in the fifth set and trounced Ferrero 6–0.

After three knee operations and a protracted comeback, Philippoussis avowed a new seriousness to his sport. He made himself available regularly for Davis Cup, hired a new physical trainer, and took up surfing as his new recreation. It seemed to work, as he made the 2003 Wimbledon final, finally losing to Roger Federer, 6–7(5), 2–6, 6–7(3).[6]

Philippoussis broke a two-year singles-title drought by winning the Shanghai Open in 2003. On 30 November 2003, he defeated Juan Carlos Ferrero of Spain to win the fourth match of the Davis Cup final in Melbourne, securing the title for Australia.

The honeymoon period with the Australian public, however, did not last. 2004 proved a disastrous year in terms of his tennis career and public profile. After shouldering most of the blame for losing Australia's Davis Cup tie with Sweden with an unexpected below-par performance, Philippoussis struggled through to the Wimbledon fourth round in June 2004. From Wimbledon in June until the end of the season in October, he failed to win a single ATP tennis match and finished with one of his lowest rankings since turning professional in 1994.

In October 2004, a much-publicised affair with Delta Goodrem had soured and seriously damaged his standing, after newspapers alleged that he had dated Paris Hilton while with Goodrem. In March 2005, he became engaged to actress and model Alexis Barbara. The Age reported the pair had split in July 2006, but Philippoussis denied this to Australian tabloid New Idea; they did split some time before he began filming Age of Love.

He confirmed to Sydney's Daily Telegraph on 23 August 2006, that he "parted ways with" his father as his coach and rehired Peter McNamara in an attempt to revive his career.[7] 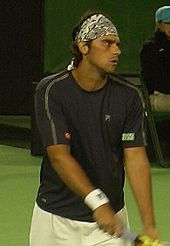 At the 2006 Australian Open

After some controversy over his wildcard selection after a disappointing 2006 Australian Open, Philippoussis made more headlines when he again earned entry into the 2006 Wimbledon. He was defeated in the second round.

Leading into the Campbell's Hall of Fame Championships as a wildcard, his record was a modest 6–7. He had a fantastic run in the tournament, getting to the final, where he defeated Justin Gimelstob in straight sets to claim his first title in almost three years.

Philippoussis, then ranked no. 114, lost to Rafael Nadal as a wildcard entry in the first round of the 2006 US Open. The Australian Davis Cup team lost against Argentina in an unpredictable 5–0. On 22 September, Philippoussis was defeated by David Nalbandian 4-6, 3-6, 3-6, in the first match of the series.

Philippoussis played in a series of Challenger tournaments after the Davis Cup semifinals. Philippoussis won the Calabasas tournament, defeating Amer Delic, 6–7(4–7), 7–6(7–4), 6–3, in the final.

Philippoussis beat Russian Dmitry Tursunov, 6–4, 7–6, at the 2007 Hopman Cup. However, during his second match against Jérôme Haehnel, he was forced to retire after hyperextending his knee.[8] An MRI showed that he had torn cartilage in his knee, forcing him to miss the rest of the season.

Philippoussis acquired a protected ranking of no. 119 in the world and was allowed to use that ranking for entry into eight tournaments. Tennis Australia, not being happy with his lack of match play and unwillingness to play the Australian Open wildcard playoff, told him that he would not be given any special treatment and would have to earn his wildcard. This forced him to use one of his protected ranking tournament entries.

In his first match of the Australian Open Wildcard playoff, he was drawn against reigning Australian Open juniors champion Brydan Klein and had a fiery contest. After a remark from Klein, Philippoussis was quoted as saying, "You say that to me again and you're in trouble; you're not playing juniors any more." He came out the victor in straight sets, 6–3, 7–5, and thus began his comeback in good form. Philippoussis then lost his second match to Samuel Groth, 4-6, 3-6, but due to other players' injuries, he advanced to the quarterfinals, where he was to play Rameez Junaid. However, due to another knee injury requiring surgery, Philippoussis was unable to play.

Philippousis appeared in a pro tour match for the first time since November 2006, when he lost to fifth seed Michael Yani, 4–6, 4–6, in the first round of the Challenger of Dallas. Philippousis also competed in some of the events on the Champions Series, winning two tournaments and topping the rankings for 2010.

Philippoussis starred as the bachelor in the reality television dating show Age of Love on the NBC television network, in June 2007. The show centred around women in or near their 40s and women in their 20s competing for his affection. At first the 6'5" heart-throb was shocked at the ages of the "Cougars" as the older women were called. The "Kittens", the younger women, seemed to be very cocky when they heard they were going against the older women. The final dates occurred in his hometown of Melbourne, Australia, including a date at Moonlit Sanctuary. In the end, Mark chose Amanda Salinas (the 25-year old Nashville Predators dancer) because it "wouldn't work out" with Jen, the 48-year old assistant to Jerry Buss.

Philippoussis declared that all his money was gone and that he will lose his home of residence. In a writ lodged with the Supreme Court on 15 May, it is alleged Philippoussis took out a loan through his company Mergis Pty Ltd which he personally guaranteed. The writ claims Mergis – of which Philippoussis is the sole director, secretary and shareholder – defaulted less than a year later. The lender is seeking $1,313,351.96, plus interest, costs and possession of the house, or is threatening to go to trial. The Perpetual Trustee Company Ltd is listed in court documents as the plaintiff, but a company spokesman said her firm had provided funds to another company which was the one foreclosing. The other company is not detailed on the writ, but Philippoussis said it was Pepper Home Loans – a company that provides loans through mortgage brokers. Once ranked as the eighth best male player in the world, Philippoussis took out a mortgage in February, 2008. Philippoussis said he was three months behind, adding that each monthly payment was more than $10,000. "I haven't played tennis since 2006, and tennis is one of those sports where if you don't play, you don't get paid", he said.[9]

He was engaged to actress Jennifer Esposito.[10] Philippoussis is reportedly single.[11]