Congregational churches are Protestant Christian churches practicing Congregationalist church governance, in which each congregation independently and autonomously runs its own affairs.

Many Congregational churches claim their descent from a family of Protestant denominations formed on a theory of union published by the theologian Robert Browne in 1592. These arose from the Nonconformist religious movement during the Puritan reformation of the Church of England. In Great Britain, the early congregationalists were called separatists or independents to distinguish them from the similarly Calvinistic Presbyterians. Some congregationalists in Britain still call themselves Independent.

Congregationalists sympathetically interpreted various dissident movements among the western churches, which were suppressed throughout the Middle Ages. By the 16th century, political and cultural changes had created a climate in which men such as John Wycliffe, John Hus, Martin Luther, and John Calvin sought change, with new ideas about the relationship of individual men to God. This influenced what they saw as the power of people without priests to intercede between them and God, the need for the people to read and interpret the Bible, and correction of distortions from original Christian thinking, as well as their protests against church abuses. These reformers advocated a return to the simplicity and authenticity they believed was described in the New Testament. Congregationalists believe their model of church governance fulfills the description of the early church and allows people the most direct relationship with God.

Congregationalism is more easily identified as a movement than a single denomination, given its distinguishing commitment to the complete autonomy of the local congregation. The idea that each distinct congregation fully constitutes the visible Body of the church can, however, be traced to John Wycliffe and the Lollard movement, which followed Wycliffe's removal from teaching authority in the Roman Catholic Church.

The early Congregationalists shared with Anabaptist theology the ideal of a pure church. They believed the adult conversion experience was necessary for an individual to become a full member in the church, unlike other Reformed churches. As such, the Congregationalists were a reciprocal influence on the Baptists. They differed in counting the children of believers in some sense members of the church. On the other hand, the Baptists required each member to experience conversion, followed by baptism.

In England, the Anglican system of church government was taken over by the king, Henry VIII. Influenced by movements for reform and by his desire to legitimize his marriage to Anne Boleyn in 1533 (without the blessing of the Pope in Rome) after divorcing his first wife Catherine of Aragon, Henry's government influenced Parliament to enact the 1st Act of Supremacy in 1534. It declared the reigning sovereign of England to be 'the only supreme head on earth of the Church in England.' In the reign of Elizabeth I, this title was changed to Supreme Governor of the Church of England, an act still in effect. The Church of England thus replaced Catholicism as the established state religion.

Robert Browne, Henry Barrow, John Greenwood, John Penry, William Brewster, Thomas Jollie and John Robinson were notable people who established dissenting churches separate from the Church of England. In 1639 William Wroth, then Rector of the parish church at Llanvaches in Monmouthshire, established the first Independent Church in Wales "according to the New England pattern", i.e. Congregational. The Taberacle United Reformed Church at Llanvaches survives to this day.[1]

With the demise of the monarchy, the Westminster Confession of Faith (1646) was officially declared the statement of faith for both the Church of England (Anglican) and Church of Scotland (Presbyterian). In 1658 the Congregationalists created their own version of the Westminster Confession, called the Savoy Declaration. The underground churches in England and exiles from Holland provided about 35 out of the 102 passengers on the Mayflower, which sailed from London in July 1620. They became known in history as the Pilgrim Fathers. The early Congregationalists sought to separate themselves from the Anglican church in every possible way and even forwent having church buildings. They met in homes for many years.

The Congregational Christian Churches in Canada (or 4Cs) is an evangelical, Protestant, Christian denomination, headquartered in Brantford, Ont., and a member of the World Evangelical Congregational Fellowship. The name "congregational" generally describes its preferred organizational style, which promotes local church autonomy and ownership, while fostering fellowship and accountability between churches at the National level.

A Congregational church in Detroit, Michigan (1880). 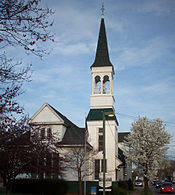 The Pilgrims sought to establish at Plymouth Colony a Christian fellowship like that which gathered around Jesus himself.[citation needed] Congregationalists include the Pilgrims of Plymouth, and the Puritans of the Massachusetts Bay Colony, which were organized in union by the Cambridge Platform in 1648. These settlers had John Cotton as their most influential leader, beginning in 1633. Cotton's writings persuaded the Calvinist theologian John Owen to separate from the Presbyterian church. He became very influential in the development of Congregationalist theology and ideas of church government. Jonathan Edwards, considered by some to be the most important theologian produced in the United States, was also a Congregationalist.[citation needed]

The history of Congregational churches in the United States is closely intertwined with that of American Presbyterianism, especially in New England where Congregationalist influence spilled over into Presbyterian churches farther west. Some of the first colleges and universities in America, including Harvard, Yale, Dartmouth, Williams, Bowdoin, Middlebury, and Amherst, all were founded by the Congregationalists, as were later Carleton, Grinnell, Oberlin, and Pomona.

Without higher courts to ensure doctrinal uniformity among the congregations, Congregationalists have been more diverse than other Reformed churches. Despite the efforts of Calvinists to maintain the dominance of their system, some Congregational churches, especially in the older settlements of New England, gradually developed leanings toward Arminianism, Unitarianism, Deism, and transcendentalism.

By the 1750s, several Congregational preachers were teaching the possibility of universal salvation, an issue that caused considerable conflict among its adherents on the one side and hard-line Calvinists and sympathizers of the First Great Awakening on the other. In another strain of change, the first church in the United States with an openly Unitarian theology, the belief in the single personality of God, was established in Boston, Massachusetts in 1785 (in a former Anglican parish.) By 1800, all but one Congregational church in Boston had Unitarian preachers teaching the strict unity of God, the subordinate nature of Christ, and salvation by character.

Harvard University, founded by Congregationalists, became a center of Unitarian training. Prompted by a controversy over an appointment in the theology school at Harvard, in 1825 the Unitarian churches separated from Congregationalism. Most of the Unitarian "descendants" hold membership in the Unitarian Universalist Association, founded in the 1960s by a merger with the theologically similar Universalists. This group had dissented from Calvinist orthodoxy on the basis of their belief that all persons could find salvation (as opposed to the Calvinist idea of double predestination, excluding some from salvation.)

Congregational churches were at the same time the first example of the American theocratic ideal and also the seedbed from which American liberal religion and society arose. Many Congregationalists in the several successor denominations to the original tradition consider themselves to be Reformed first, whether of traditional or neo-orthodox persuasion.

In the early 20th century some Congregational (later Congregational Christian) churches took exception to the beginnings of a growth of regional or national authority in bodies outside the local church, such as mission societies, national committees, and state conferences. Some congregations opposed liberalizing influences that appeared to mitigate traditional views of sin and corollary doctrines such as the substitutionary atonement of Jesus. In 1948, some adherents of these two streams of thought (mainly the latter one) started a new fellowship, the Conservative Congregational Christian Conference (CCCC). It was the first major fellowship to organize outside of the mainstream Congregational body since 1825, when the Unitarians formally founded their own body.

In 1957, the General Council of Congregational Christian Churches in the U.S. merged with the Evangelical and Reformed Church to form the United Church of Christ. About 90% of the CC congregations affiliated with the General Council joined the United Church of Christ. Some churches abstained from the merger while others voted it down. Most of the latter congregations became members of either the CCCC (mentioned above) or the National Association of Congregational Christian Churches. The latter was formed by churches and people who objected to the UCC merger because of concerns that the new national church and its regional bodies represented extra-congregational authorities that would interfere with a congregation's right to govern itself. Thus, the NACCC includes congregations of a variety of theological positions. Still other congregations chose not to affiliate with any particular association of churches, or only with regional or local ones.

Mergers in other countries

There are many United Congregational Churches in Southern Africa all independently run, however they all meet together to discuss challenges. Visit www.uccsa.org.za/

The mission to Argentina was the second foreign field tended by German Congregationalists. The work in South America began in 1921, when four Argentine churches urgently requested that denominational recognition be given George Geier, who was serving them. The Illinois Conference licensed Geier, who worked among Russia Germans who were alike in every way to those in the United States and in Canada. The South American Germans from Russia had learned about Congregationalism in letters from relatives in the United States. In 1924 general missionary John Hoelzer, in Argentina for a brief visit, organized six churches.

In Canada, the first foreign field, thirty-one churches that had been affiliated with the General Conference became part of the United Church of Canada when that denomination was founded in 1925 by the merger of the Canadian Congregationalist and Methodist churches, and two-thirds of the congregations of the Presbyterian Church of Canada. In 1988, a number of UCC congregations separated from the national church, which they felt was moving away theologically and in practice from Biblical Christianity. Many of the former UCC congregations banded together as the new Congregational Christian Churches in Canada.

The Congregational Union of Ireland was founded in the early 19th century and currently has 29 member churches.

The Congregational Christian Church of Samoa is one of the largest group of churches throughout the Pacific Region. It was founded in 1830 by the London Missionary Society, missionary - John Williams on the Island of Savaii. As the church grew it established and continues to support theological colleges in Samoa and Fiji. There are over 100,000 members attending over 2,000 congregations throughout the world, most of which are located in Samoa, American Samoa, New Zealand, Australia and America. The Christian Congregational Church of Jamaica fall under the constitution of the Samoan Church.

Wales traditionally is the part of Europe which has the largest share of Congregationalists among the population, most Congregationalists being members of Undeb yr Annibynwyr Cymraeg (the Union of Welsh Independents), which is particularly important in Carmarthenshire and Brecknockshire. Among its leaders up to the end of the 20th century was R Tudur Jones.

The Congregational Federation, Undeb yr Annibynwyr Cymraeg, and the United Reformed Church enjoy good relations and share certain aspects of church life together including their joint involvement in the Council for World Mission.

The London Missionary Society was effectively the world mission arm of British Congregationalists - it sponsored missionaries including Eric Liddell and David Livingstone.

As thinking developed, particularly in the context of decolonisation, and churches wanted to recognise the gifts of people of the South, the London Missionary Society transformed into the Council for World Mission - an organisation in which the United Reformed Church is no more important than the Church of South India (for example).