The Orb's Adventures Beyond the Ultraworld

The Orb's Adventures Beyond the Ultraworld 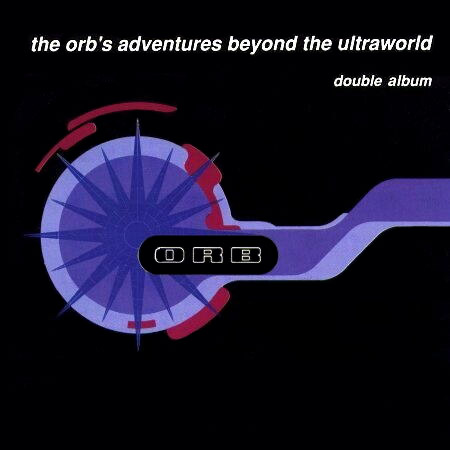 "The Orb's Adventures Beyond the Ultraworld" is a seminal 1991 by the electronic music collective . The album's framework is of a two-hour trip though music genres and studio electronics, pushing the threshold of live stage performance. The is a continuous progressive composition consisting of several tracks advancing the travel concept and composed of vocal samples and sound effects interspersed with original music.

The Orb have always primarily been composed of one individual, , along with numerous and varied assistants throughout the group's recording career. [ Prior to The Orb, Paterson was a for , and worked in 's . ] Paterson's late 80's and early 90's chillout dj sets in 's "Land of Oz" night in the club Heaven are legendary. [Paterson's "White Room chillout sets are mentioned [http://www.thedjlist.com/djs/PAUL_OAKENFOLD/ here] ] and included collaborations with another ambient house pioneer . Paterson says: cquote|"We'd build melodies up by overdubbing and mixing multiple tracks and then take an eight track (or was it a twelve track?) into Heaven, just linking it up to three decks ( [turntables] ), loads of CD players, loads of cassettes... we used to keep it very, very quiet. We never used to play any drums in there. It'd be, just like, you know, BBC sound effects, really... four or five hours playing really early dub reggae... For All Mankind [a documentary of NASA's Apollo missions, with a soundtrack by Brian Eno] . We had white screens so we could put up visuals as well. We had home movies of ducks in the park. We'd go for everything. It was all layering on top of each other. " [ Ocean of Sound. London: Serpent's Tail, 1995 ]

Following success in the singles market (including the 1988 "Tripping on Sunshine", 1989 "Kiss EP" and 1989 "Huge, evergrowing brain that rules from the center of the Universe"), [The singles are detailed [http://www.thedjlist.com/djs/THE_ORB/ here] ] Paterson and Cauty started work on their first album. [Cauty later released the collaboration as "Space"] Cauty left in 1990 to pursue another band, , with , [There is some evidence to indicate they split because of "artistic differences," Paterson viewed himself as a musician, Cauty as a DJ and there was some concern that Cauty was treating as a side project. There are direct parallels between Space and Adventures but Cauty removed Paterson's attribution from the credits ] . Paterson moved on to his next collaboration "" in Autumn 1990 with Killing Joke's Youth. The track was recorded by an 18 year old studio Engineer and future Orb collaborator Kris "Thrash" Weston.

Finally in April 1991, the Orb released their first album "The Orb's Adventures Beyond the Ultraworld" onto an audience prepared by their groundbreaking singles and several radio sessions. [The "Maida Vale" Peel sessions are listed [http://www.bbc.co.uk/radio1/johnpeel/artists/t/theorb here] ] The album was received in the UK and Europe with critical acclaim. The album rose to position #29 in the UK Album charts. By mid-91, the Orb had signed a deal to release the album in the U.S. but were forced to edit the double-disc 109:41 minute UK release down to a one disc 70:41 minutes. The full double-disc version was later released in the U.S. by Island. As of April 25 2006, only the original 70:41 minute US release is available for purchase in Apple's iTunes Music Store.

Ultraworld prepared the groundwork for many , , and artists; but additionally the commercial success of this album, the live tour which followed and the successor announced the arrival of electronic music into the mainstream. The overt use of sampling flowered in this brief period before being legislated out of existence. Paterson encountered two lawsuits in relation to sampling on "Ultraworld"; sued for the use of her vocal in "Little Fluffy Clouds", and Minnie Riperton's estate for her vocal in "A Huge Evergrowing..." Paterson's use of works ( and recordings) also set the ground for the reaction and response of the musical community to the intrusive heavy-handed approach.

Each track on Ultraworld stands distinct from its peers; there is little interrelation between them. The journey from Fluffy Clouds to Ultraworld, occurs in stages but only the title of the track reveals the map. The self-referentialness and overt absurdity of the albums space context are presented as a lampoon of conceits, the jibe extended to the embrace of the . Paterson veers from sample to sample, each one reinforcing the concept of travel, motorcycles, space ships, planes, each stitched and modified to make a new narrative, the definition of travel now presented as internalised, perhaps in a narcotic context.

The rejection and absence of the standard percussive framework (a 4/4 beat) allows Paterson to experiment with some very ambitious multitracked looping; samples are looped and cut to make a shifting drone anchor. Paterson often plays with samples over this; some Russian s talk us through one part of Paterson's journey, through another. The use of spoken word samples, dialogue, musings, and other incongruous sources are contrasted with (often loping, syncopated) ambient house and dub rhythms.

The 'Ultraworld' reference is from an [http://www.blakes-7.co.uk/episodes/ep10c.shtml episode] of the "" TV show; the song title "A Huge Ever Growing Pulsating Brain That Rules from the Centre of the Ultraworld" is the same one given to a sound effect from that show, as released earlier on a BBC sound effects album. Pink Floyd's Animals and are also namechecked either as objects of ridicule, in the context of double-albums and Battersea Power Station (which is a frequent theme in Orb artwork), spaceships, or more loosely through overwrought, ornate track titles, and references.

The conceit backfired in the US market. American record labels were not prepared to have rockist principles mocked by a musician producing what was still a very esoteric genre in America (or just as likely, considered it difficult to sell a more expensive double-CD by an 'unknown' artist), and forced Paterson to compromise the integrity of the album, by cutting the album from two disks to a single one, and in cutting several tracks down to more traditional 3 or 4 minute length.

One definition of "chilling" presupposes transcending from a drug-induced high; in this context the frenetic pace of MDMA high. The UK in 1991 was not long after the Summer of Love, the and movements, and with them the social acceptability of Ecstasy use, especially when attending and clubs.

Paterson's music found favour with the rooms in clubs designed to relax party-goers after dancing to the more up-tempo and beats. Ultraworld provided an extended listening period of just under 2 hours. Like Eno's and early ambient works, Ultraworld was used to soothe and calm amphetamine jitters and racing pulses.

The two covers are primarily distinguished by the outing of the Floydian Battersea Power Station on the US cover. The images are attributed as follows in the lining:
*orbsonic love deep space & sampling image in the designers republic: ian, dave, nick, micheal & vanessa
* photographed by richard cheadle and treated by dr/chromagene
* clouds over the (challenger 1 April '83)

Eamon McCucker [http://www.cdtimes.co.uk/content.php?contentid=81 review]
* [http://www.backsideoftheorb.com/index.php Back Side of the Orb]