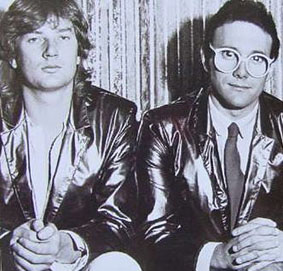 Trevor Charles Horn (born ) is an English , songwriter and musician. He was born in , .

Horn has produced commercially successful songs and albums for numerous British and international artists. He won a Grammy Award for co-writing "" with Seal. As a musician, he has had chart success with his bands , Yes and . He also owns a significant stake in the recording company , and a music publishing company, . The three are combined under the corporate umbrella of .

Horn was regarded for much of the 1980s as the best producer in Britain, evidenced by a note that the band made on their 1985 album "Flaunt the Imperfection" (produced by of )—they credited their producer as "Walter (Trevor Who?) Becker". There are many such casual references to Horn in British culture.

Horn began his professional career as a backing musician in the late 1970s for star . One of the other members of her backing band was keyboard player . Horn and Downes formed in 1978, in which Horn played bass, and as well as providing vocals. However, just prior to the The Buggles, Horn signed witn Sonet records and recorded two singles under the moniker of 'The Big A'. One single "Caribbean Air Control" was released in the United Kingdom, but failed to chart. Around this time Horn, Downes and (Tina Charles' guitarist) co-wrote "", which was released by The Buggles in 1979 reaching No 1 in the UK charts. The song also appeared on the group's first album, "", which was released in 1980. Later in the same year Horn and Downes were invited to join the rock group Yes. Horn became the lead vocalist, replacing . He recorded one album with the band, "Drama", on which he also plays bass on one track. However, he left after seven months, at the beginning of 1981, to concentrate on his production work. He also completed a second Buggles album, "", mainly alone after a falling out with Geoff Downes. Horn did work with Yes again, not as a band member, but (co-)producing their next two studio albums, including the noted 1983 "comeback" album "", and also went on to be a founding member of the . He is known for performing on albums he produces. His latest band is The Producers, in which Horn plays with various musicians/producers, namely , producer and singer/songwriter . The band performed its first gig at the Camden Barfly in November 2006.

Horn's first production success came with the pop band Dollar in 1981 and 1982. He then went on to produce "" (1982) by ABC, which reached no. 1 in the UK album charts, and has since been acclaimed as one of the 100 best albums of all time. It was during the "Lexicon" sessions that Horn first assembled the production "team" that would characterize and define the sound of a Trevor Horn production in the 1980s: on keyboards and arrangements, (later ) as chief engineer, on the lion's share of programming for the (which was still a novelty but would prove integral to Horn's production technique), background vocalist Tessa Webb, percussionist and others. Originally brought in to flesh-out keyboard parts, Dudley was soon co-writing with the group and scoring the album's much-noted orchestrations. She (and the others) would soon be in great demand due to their contributions to Horn's successes. He achieved his greatest commercial success in 1984, firstly with the Liverpudlian band . He was approached by to produce the song "", but he was unavailable. Instead, he gave use of his studio, SARM West in London, free of charge to the project for 24 hours, which Geldof accepted, assigning as the producer instead. So, on November 25, 1984, the song was recorded and mixed. Horn did however produce the featuring messages from artists who had and had not made the recording (including , from , , all members of and from Frankie Goes to Hollywood) was also recorded over the same backing track as the A-side.

On , , a charity concert celebrating Horn's 25 years as a record producer took place at . Performers at the show included the Buggles, , ABC, , , Lisa Stansfield, , Seal, Dollar, Propaganda, t.A.T.u., Yes, Grace Jones and Frankie Goes to Hollywood (with replacing original vocalist ). were scheduled to perform but did not. A double CD compilation titled "Produced by Trevor Horn" was released in conjunction with the concert. An edited version of the concert has been broadcast on television in several countries under the title "25 Years Of Pop: Produced by Trevor Horn", and a DVD release of the full concert is available at [http://www.cdjapan.com] .

On , the released their album "Fundamental" which was produced by Horn. The album reached number five in the UK charts. In the same month, he featured in a Pet Shop Boys concert specially recorded for . Following the critical success of the event Horn has produced an album version, "Concrete", released 2006. Horn also produced Captain's debut album, "This is Hazelville", released late 2006.

Trevor Horn's songwriting credits date back to 1979 when he co-wrote a song for , "Baby Blue" with and Geoff Downes.

All the Buggles' hits — including , , "Elstree" and — were co-written by Horn and Downes and, occasionally, . Horn also co-wrote all of the 1980 album, [http://en.wikipedia.org/wiki/Drama_(Yes_album) [Drama] . On his return to the band (as producer) in 1983 he contributed to their biggest hit, and the dance hit .

For Dollar’s "The Dollar Album" (1982), Horn wrote a love story across four songs: "Hand Held in Black and White" (the meeting), "Mirror Mirror" (the loving), "Give Me Back My Heart" (the break-up) and "Videotheque" (the postscript). All four singles broke the top twenty, and two, "Mirror Mirror" and "Give Me Back My Heart", reached number four on the UK singles chart.

In 1984, he co-wrote several classic hits with the including "", "Beat Box" and "Moments in Love". The next year he co-wrote "Slave to the Rhythm". This was originally intended as Frankie Goes to Hollywood’s second single, but was instead given to . Horn and his studio team reworked and reinterpreted it, style, into six separate songs to form the "" album.

In the 1990s, Horn wrote two songs for solo female singers. "Riding Into Blue (Cowboy Song)" was recorded by Inge a/k/a German artist Inga Humpe (Neonbabies, 2raumwohnung) and "Docklands" which was recorded by Betsy Cook. He also co-wrote two songs with for his 1991 album, "The Driver" and "The Shape of Things to Come" for Cher's 1995 album "It’s a Man’s World".

For yet another tangential career progression, Horn co-wrote the theme song "Everybody Up" to the TV programme "", a comedy sketch show which appeared on BBC2 in 1995. This was another collaboration with , a member of the Art of Noise, and .

Horn’s songwriting can be heard on numerous film soundtracks. In 1992, Horn collaborated with composer to produce the score for the movie "Toys" starring , which included interpretations by , and .

In 1982, Horn founded the musical publishing company together with his wife, Jill Sinclair. This coincided with their then recent acquisition of Basing Street Studios, which also housed the fledgling publishing company. Perfect Songs was able to harness and develop the up and coming young artists working in the recording studio.

The first to be signed were Frankie Goes to Hollywood, followed by the Art of Noise and Propaganda. These first few signings to the company were instrumental in establishing the company ethos of "innovation and artiste development, taking risks and signing acts far into the left field". [cite web| last =| first =| authorlink =| coauthors =| title =International Catalogue: Perfect Songs| work =| publisher =Mushroom Music Publishing| date =2004| url =http://www.mushroommusic.com.au/catalogues/cat.asp?id=84| format =HTML| doi =| accessdate =2007-10-02] Successful songwriters he has signed since include Seal, , , , , , , and (writer of the hit "Overload" for ).

During the 1980s, Trevor Horn wore large "" style , which were then in fashion, when he performed. He stopped wearing such glasses in the 1990s, but still wears hard-framed glasses whenever he performs. One of his jokes, beyond wearing the large glasses, was that he was "a camera," consistent with his hits, "Video Killed the Radio Star" and "I Am A Camera". Today he wears more modern, smaller glasses with a thick frame.

In his music videos with Buggles, he frequently wore a silver suit, and in his live performances wore a white sports jacket.

Horn married former mathematics teacher and business partner Jill Sinclair in 1980. They have four children, a son Aaron (born 1984) and three daughters. Their main home is a £12 million mansion in near , (which they have recently moved out of.); while other property includes in , North London, and the United States.

Horn has one brother — Kenneth, formerly a then director of TV programmes such as and now a producer for ITV — and two sisters who live in Canada.