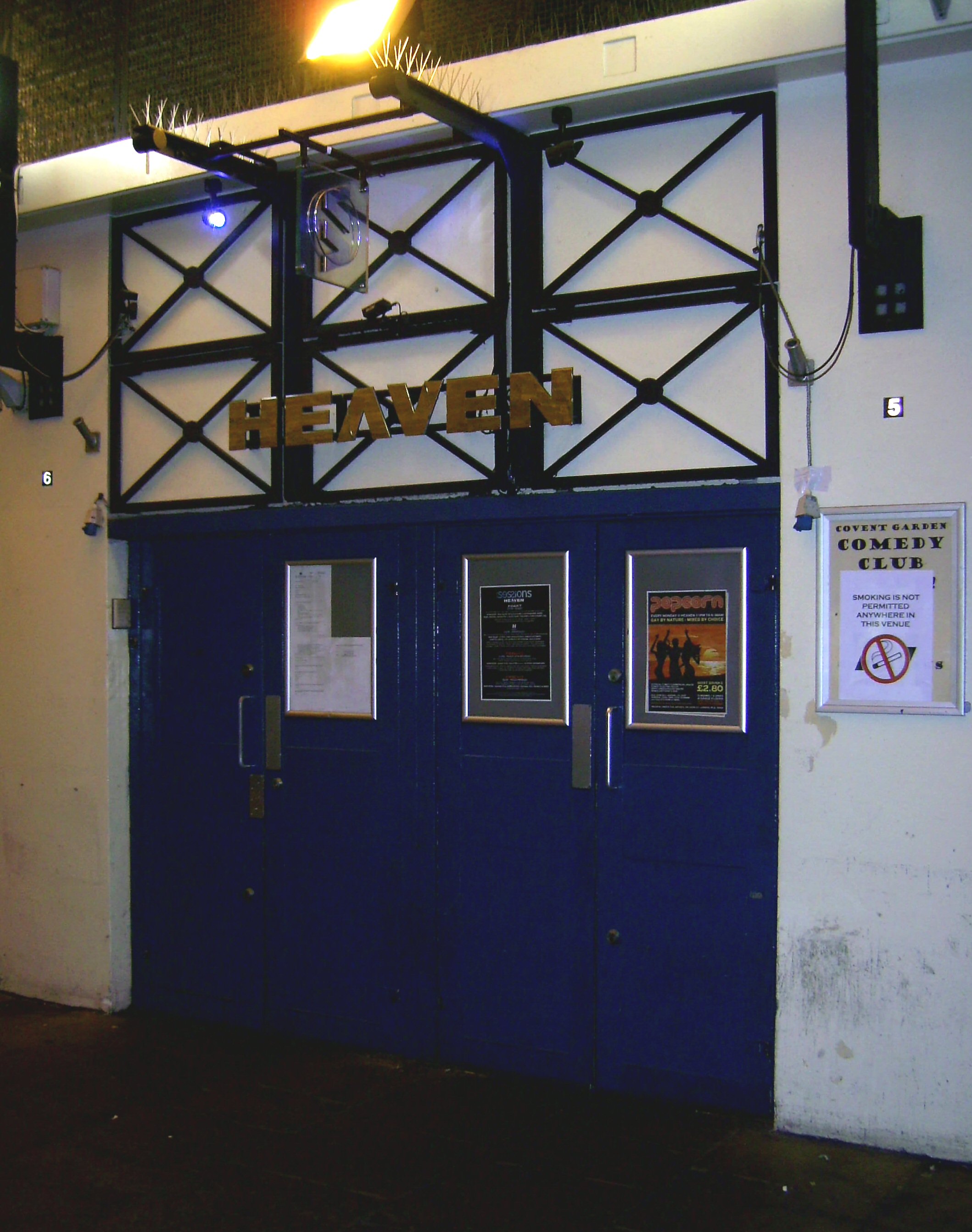 Heaven is a in , which appeals predominantly (but not exclusively) to the market. It is located underneath in Central London, just off .

Heaven opened in Dec 1979. It was opened by Jeremy Norman. The interior was designed by his partner Derek Frost. Norman had started an earlier club, The Embassy, in Bond Street in 1978. The Embassy had taken London by storm and is generally seen as the London equivalent of New York's . Norman, an entrepreneur took his knowledge and used it to create an entirely new form of gay club on a larger scale in the arches beneath Charing Cross railway station, once part of Adelphi Arches, a large wine-cellar for the hotel above. Heaven quickly established itself as the centre of the (then understated) gay London nightlife. Until Heaven, most gay clubs were small hidden cellar-bars or pub discos. Heaven brought gay clubbing into the mainstream.

In 1993, Heaven was acquired from Norman by 's Virgin Group. Branson was one of the first to identify the burgeoning '' and saw the club as an investment opportunity. However, as one of the first gay clubs in London, and one of the first openly-so in the world, it courted controversy, frequently appearing in the tabloid press, especially in the famous headlines about alleged ecstasy use in the nightclub in 1989.

Heaven became home to the club in October 1993 until October 1996 hosting visits from , and and DJs including Derrick May and .

The club was refurbished in 1998 and re-opened as a mainstream nightclub to challenge other larger nightclubs in Central London which had since appeared since the growing popularity of . Clubs like Trade and had constantly challenged Heaven's long standing reputation as the only major gay nightclub in London.

Famous performances include Divine, Sylvester, , , , and most notably who launched her single "Believe" there in 1998 to a packed crowd. Cher was introduced onto stage by close friend . The singer was so scared by the amassed crowds, that once on stage she "mimed" to only two songs instead of the intended five.

Heaven's original resident DJ has often been credited with creating the now customary style of (when previously two records had normally only been segued together by fading one in and the other out regardless of tempo).

One of Heaven's most famous DJs Marc Andrews left his main Saturday night residency to join rival club based in Brixton. Their Saturday night presentation "Love Muscle" gave Heaven competition and caused a significant change in the balance of the major London gay club's control of the market.

"Heaven" was highly profitable in the early part of the millennium, even though gay culture in itself had become progressively mainstream and less underground. Heaven's reputation ensured it was chosen by national promoters such as and (run by DJ ) who eventually took up a permanent residence on a Thursday night until 2005.

After the 1998 refurbishment, Heaven enjoyed a real buoyancy in terms of custom, and was very popular. The dotcom revolution and the economic upturn of 1999–2000 meant that customers had a lot of disposable income.

The original Heaven sound of the 1970s and 1980s could be attributed primarily to the producer and later to original resident DJ . It can be described as having disco origins and influenced by the emergent style. Examples of this style of music include 's - "Love Pains", Company B's - "Fascinated", Eria Fachin's - "Savin' Myself", 's - "I Feel Love", - "" or "Always On My Mind", and Divine's - "Native Love".

The attacks on on sent a shock through the worldwide economy, especially affecting airlines. The Virgin Group, who at the time owned both and "Heaven", wanted to consolidate their business portfolio and concentrate on Virgin branded products. Although "Heaven" was part of Virgin Hotels group, it did not carry the Virgin logo, and had no open association with Virgin. This led to the sale of the club in 2003 to a consortium which comprised Paul Savory (who invested the lion's share of cash), Pure Group [http://www.puregroup.com] owner Jeremy Millins and original creative director David Inches.

Inevitably "Heaven" now faces increased competition from many other clubs which enjoy more liberal licensing regulations south of the river, in , for example "Fire". On the latter point, however, Heaven now has a 06:00 drinks licence, and in fact is the only venue in Westminster to have one.

Another source of competition has been other places for gay men to meet: s/s, and websites such as Gaydar. Other niche venues specialising in areas of gay sub-culture have also sprung up including fetish, , sportswear and clubs.

On 22 Sept 2008, Heaven was purchased by the MAMA Group through its jointly-owned subsidiary company G-A-Y Ltd. [ [http://www.mamagroup.co.uk/18/section.aspx/download/99 MAMA Group - Acquisition of Heaven (London) Limited and issue of convertible loan note] ] MAMA Group's partner in G-A-Y, Jeremy Joseph, has promised, "The next couple of weeks I will spend getting to re-know Heaven and will be making plans that will include a major refurbishment."Fact|date=September 2008 He emphasised that G-A-Y only ever rented their previous venue, the Astoria, which they moved out of this summer. That meant they couldn’t change its run-down interior, but Joseph will be in a position to invest in Heaven.Fact|date=September 2008 He promised clubbers that G-A-Y’s Saturday nights will return at the new venue, as will the Friday night Camp Attack. But he also said he would be trying to retain Heaven regulars.Fact|date=September 2008

Heaven remains one of the best known gay nightclubs in London and one of the largest in terms of floor space in Central London. [ [http://www.timeout.com/london/gay/events/644913/heaven.html Heaven at Heaven - Bars & clubs - Gay & Lesbian - Time Out London ] ] [ [http://americanairlines.wcities.com/en/record/46,2856/1/record.html London | Bars, Cafés & Nightlife | Gay & Lesbian | Heaven Nightclub | AA Destination Guide ] ] [ [http://www.guidemag.com/travel/invoketravelarticle.cfm?ID=5F49F7FD-CC6C-11D3-AD8E0050DA7E046B May 2007 London travel article on www.guidemag.com ] ] It hosts several large events, corporate events and has been used as a setting for music videos.

Monday is perhaps the busiest night in "Heaven"'s week. The club plays host to a party called Popcorn! which plays pop and funky house music.

Although advertised as a gay event, the production style of the events have toned-down the gay ethos. The club occasionally features , however, nowhere near as many as previous years. This has led to "Popcorn" attracting criticism from the gay community and accusations of "Heaven" "selling out" and losing its core values as a gay venue.

Wednesday at Heaven is [http://www.timesonline.co.uk/tol/life_and_style/article611876.ece Patrick Lilley] 's "Work!", with a music mix of electro, , 1980s, house and pop in three rooms.

Fridays used to be private hire nights where events like Gatecrasher and Euphoria would make guest appearances. Since being taken over by the G-A-Y brand, Heaven will host "Camp Attack". [http://www.g-a-y.co.uk/eventdetail.asp?ID=464]

On " [http://scene-OUT.com/party/showproduct.php?product=78 Heaven Saturday] ", a variety of music is played, aimed at a wide cross-section of the gay community. These nights occasionally feature a stage performance of (often) muscular men dancing on podiums.

The club is referenced in the song "Heaven" on the 1979 "Fear of Music" album by the . David Byrne describes his song as being about "a gay disco in London owned by Richard Branson." Fact|date=February 2008 It is also referred to directly in the "Battles" episode of the first series of the UK "".