Efteling is the largest theme park in the Netherlands, and as it opened in 1952, it is one of the oldest theme parks in the world. Efteling is located in the town of Kaatsheuvel, in the municipality of Loon op Zand, and has received over 100 million[1] visitors.

Originally the park catered towards children with a fairy tale theme. In over fifty years the park has evolved from a nature park with playground and a Fairy Tale Forest, into a full-sized theme park. It is twice as large as the original Disneyland park in California and predates it by three years. Nowadays, Efteling caters to both children and adults with its cultural, romantic and nostalgic themes and its variety of amusement rides.

Efteling 'officially' opened on May 31, 1952,[2] when the Fairy Tale Forest (het Sprookjesbos), designed by the famous Dutch illustrator Anton Pieck, was declared open. Initially, the Fairy Tale Forest was home to some ten different fairy tales, all of them brought to life using original drawings by Anton Pieck alongside ingenious movements and lighting and sound effects designed by the Dutch film maker Peter Reijnders. The life-size fairy tales, displayed together in an atmospheric forest, proved to be an enormous success. In 1952 alone Efteling welcomed 240,000 visitors.

There is some debate about whether May 31, 1952, was the actual start of Efteling: some argue that 1950 should be considered the official year of the park's establishment, since in that year Stichting Natuurpark de Efteling, or Efteling Nature Park Foundation, was founded.[3] 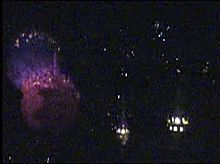 The success of Efteling has been attributed largely to its high-quality ride designs and architecture and its pleasant green environments and gardening. The park, under the aegis of its creative directors, has always had high standards. When Anton Pieck was asked to design the initial fairy tales for the park, he made sure the park would live up to his personal high standards: there would be no use of cheap building materials, plastic or concrete. Pieck's illustration style, somewhat grim and dark, yet also romantic and nostalgic, was the thematic base on which most future expansions were built.

Pieck worked for Efteling until the mid 1970s, when his position as chief designer was passed on to the young Ton van de Ven. Van de Ven had already been working for Efteling for several years and Pieck was very pleased with his work. The Haunted Castle (het Spookslot), which opened in 1978 as the park's first new large ride, was the first attraction designed entirely by Van de Ven (although he used some ideas from joint brainstorming sessions with Pieck). Later on he designed many more successful rides and new fairy tales, leading him to be considered by some as the world's best 'imagineer' after Disney.

Van de Ven continued his work until 2002, when he retired. A new team of imagineers is currently working on new Efteling rides.

Efteling has been divided in four sections: the theme park (1952), the four-star Efteling Hotel (1992), the 18-hole golf course (1995) and the new holiday park with bungalows. The theatre which was used for park shows is to be developed in a property to house big theatre productions which are not included in park admissions. The theatre can therefore be considered as a fifth section. The hotel was operated by Golden Tulip for some years, but Efteling decided recently to manage it independently. All three divisions are profitable nowadays, although it took the golf course several years to break even.[4] The divisions are contained in commercial corporations, but all shares are still held by the non-profit Efteling Nature Park Foundation (Stichting Natuurpark de Efteling). 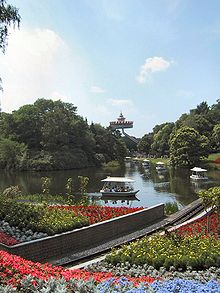 Efteling currently covers approximately 160 acres (650,000 m²). This area has changed only marginally over the course of its history. However, the park's foundation owns a much larger area of land, covered mostly with young forest, some grassland, roads, and an 18-hole golf course.

The park is divided into four themed areas or 'realms,' though these are not entirely comparable to Disney's 'lands.' Originally, the park was divided into four areas called North, West, East, and South, with most of the park's historical rides and attractions, like the Fairy Tale Forest, located in West. When the park reorganized its infrastructure in the late 1990s (adding the Pardoes Promenade and a central hub called Efteling Brink), it also changed its area names. North was changed to Reizenrijk (Travel Realm), West became Marerijk (Fairy Realm), East became Ruigrijk (Rough Realm), and South became Anderrijk (Differ Realm).

Although the park was not built with these divisions in mind and the names may seem cryptic, they do make a certain sense. Perhaps the area most suited to its name is Ruigrijk, where most fast rides like the double-loop roller coaster Python (constructed in 1981) are located. Marerijk is the home to the Fairy Tale Forest and the Fairies of the Droomvlucht, Anderrijk has some rides that are inspired by non-Western cultures (e.g. Fata Morgana and Piraña), while Reizenrijk has the Carnaval Festival ride, which travels through several different 'countries.'

Not only the Fairy Tale Forest, but almost the entire Efteling park was built in a rather rural area, with lots of pine trees, giving it a 'nature park' feeling. Together with the large ponds and gardens (with thousands of flowers, and maintained by an army of gardeners), the park's abundant green space is rather unusual among the world's leading theme parks. Unfortunately, Dutch climate and the reliance on greenery and trees for a huge part of the park's looks (and theming) prevent year-round opening in full. Efteling used to be closed all winter (only being open from April through October), but the park's management, struggling to make the park more profitable and creating a better return-on-investment, has been experimenting with a so-called "Winter Efteling" since 1999 (see index below for attractions closed during "Winter Efteling"

). Thanks to great efforts to decorate the park using loads of pine trees and thousands of Christmas lights in winter, "Winter Efteling" is growing more popular every year, reaching a climax during the holidays when thousands of people visit the park.[5]

As of April 1, 2010, Efteling has announced that it is going to be opened year round.

Attractions, rides and fairy tales in Efteling and their designers 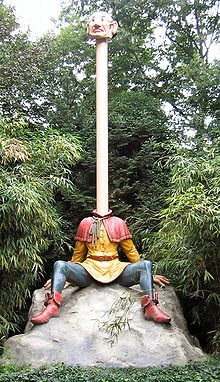 Other ventures operating independently from the amusement park:

The Efteling is a private company limited by shares. The Efteling Nature Park Foundation (Stichting Natuurpark de Efteling) is the only shareholder. The foundation was founded in 1950 by R.J.Th. van der Heijden, Peter Reijnders, and Anton Pieck. The company is led by two directors. They manage four sections: the theme park, the Efteling Hotel, the Efteling Golf course and the Efteling Theatre.

Most of the visitors are Dutch. 94% of the Dutch population has visited the park.[13] 16% of visitors live in areas like Flanders (Belgium), Westphalia (Germany) and Southern England (UK).[14]

A graph of the number of visitors of the Efteling during the period 1952-2010:

On December 11, 2008, theme park officials announced that they would spend 40 million euros during the years 2009-2012 on three large construction projects: a convention centre accommodating 1500 visitors (de Burcht), an arena from the Middle Ages for 750 show spectators (Raveleijn), and a redesign for snack bar "De Likkebaerd" to turn it into a station for the park's steam train. They also said they didn't expect to suffer from the economic crisis because they have drawn more visitors in such periods in the past.[15] In 2009 the Efteling announced that the Burcht has been cancelled. [16] 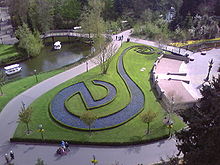 Efteling has a good relationship with the Disney theme parks. Disneyland Paris consulted Efteling during its construction and design phase, in order to adapt the American park to European culture. As a token of appreciation the Disney Company gave Efteling a small statue. Ton van de Ven, who designed many of Efteling's attractions, is also a good friend of Disney's Tony Baxter (senior vice president of Walt Disney Imagineering). The relationship between the two parks was emphasized when Efteling won the 2004 Thea Classic Award, the highest honour awarded by the Themed Entertainment Association: Efteling had, as it turned out, been nominated by Tony Baxter.[8][17]

There is in fact a legend of sorts connecting Disney and Efteling: for years, rumors have circulated that Walt Disney got his inspiration for Disneyland (which opened in 1955), from Efteling (which opened in 1952) — and in the early 1950s Walt Disney travelled to Europe a few times, visiting tourist attractions. Reportedly, a brochure from the IAAPA, the International Association of Amusement Parks and Attractions, even states that Disney "spent a great deal of time studying Pieck's work at Eftling [sic] before beginning his own parks." However, the rumour was discredited by Efteling: one of the causes of the rumour was an off-hand remark by a PR person for Efteling, who had dropped to reporters that Disney could well have visited Efteling—the reporters accordingly dropped the hypothetical from the phrase, and a legend was born. Disney probably did not visit Efteling at all, though he did visit Madurodam and Tivoli Gardens in Copenhagen; the latter actually did provide some inspiration for Disneyland.[18]