Delhi Township is one of the twelve townships of Hamilton County, Ohio, United States. The 2000 census found 30,104 people in the township.[3]

Located in the southwestern part of the county along the Ohio River, it has the following borders:

Much of what was once part of Delhi Township, including its entire shoreline along the Ohio River, is part of the city of Cincinnati, the county seat of Hamilton County. Unincorporated communities in the township include Delhi Hills, Delshire, and Mount Saint Joseph. The Cincinnati communities of Price Hill, Sayler Park, Sedamsville and Riverside were part of Delhi Township until they were annexed by Cincinnati at the turn of the 20th century.[citation needed]

The township has an area of approximately 12 sq mi (31 km²). Because the township covers the slopes leading down to the floodplain of the Ohio River, the township contains many hills, and its landscape is cut by a number of ravines caused by streams that make the descent.[citation needed] 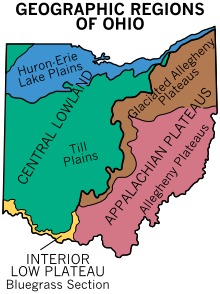 The Sedam Springhouse, which may date back to the 1790s, is one of the oldest buildings in the Township.[5]

Three fire stations serve the township. Fire Station #33 serves as the fire department's headquarters. The other stations are Station #30 and Station #36.[6]

Delhi has various annual celebrations, including the Delhi Skirt Game. The Delhi Skirt Game is a Chicago-style softball game between officers of the Delhi Township Police Department and the Delhi Fire Department; the teams consist of male officers dressed in drag. The game is played in Delhi Park on the first Friday of August, with festivities surrounding the game including live music, games of chance, concessions, auctions and fireworks . The Skirt Game benefits needy families of Delhi Township.[1] 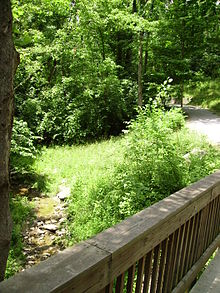 Story Woods Park, part of the Delhi Park system, has three main paths and is located within woods next to Rapid Run Middle School.

The township operates over 100 acres (40 ha) of park property.[7] Parks operated by the township include Delhi Park, Five-Points Park, and Story Woods Park. Delhi Park, which opened in 1954, is the oldest park in the township. It has nine ball fields, including baseball courts, football fields, soccer fields, tennis courts, and sand volleyball courts. Delhi Park also has the Glen Carder Lodge, four picnic shelters and the "Spray Park." Five-Points Park, a 1.1 acres (0.45 ha) park, has a gazebo and the firefighter's memorial. Story Woods Park, a 40 acres (16 ha) park, has a playground facility, a picnic shelter, toilet facilities, and 2.03 miles (3.27 km) of walking trails. The township also has the Delhi Springhouse, which opened to protect the springs. The springhouse was also used as a source of drinking water and as cold storage for perishable foods. Hamilton County operates Embshoff Woods, a park which opened in 1982 and consists of 331 acres (134 ha) of protected natural areas.[8]

In November 2007, the township dedicated Veterans Memorial Park in honor of the township's military veterans. Located within the park are the Wall of Honor Monument and the Killed-in-Action Memorial.[9]

The College of Mount St. Joseph is located in Delhi Township.[6] It has approximately 2,300 students and offers liberal arts and professional education programs.[10] Other area universities include the University of Cincinnati and Xavier University.[11]

The Public Library of Cincinnati and Hamilton County operates the Delhi Township Branch. The township first received a library in 1949 when a collection of books opened in Delhi Public School. A permanent library facility was dedicated in January 1968. In 1999 an addition and addition added 5,000 square feet (460 m2) of space to the building, increased the size of the collection, expanded the children's area, added a glass reading room, and altered the landscaping. The branch was renamed to the Delhi Township Branch Library during its reopening and rededication.[13]

It is the only Delhi Township statewide.[14]

The township is governed by a three-member board of trustees, who are elected in November of odd-numbered years to a four-year term beginning on the following January 1. Two are elected in the year after the presidential election and one is elected in the year before it. There is also an elected township fiscal officer,[15] who serves a four-year term beginning on April 1 of the year after the election, which is held in November of the year before the presidential election. Vacancies in the fiscal officership or on the board of trustees are filled by the remaining trustees.