A drag queen is a man who dresses, and usually acts, like a caricature woman often for the purpose of entertaining. There are many kinds of drag artists and they vary greatly, from professionals who have starred in films to people who just try it once. Drag queens also vary by class and culture and can vary even within the same city. Although many drag queens are gay men, there are drag artists of all genders and sexualities who do drag for various reasons or purposes. Women who dress like men for the same purpose are known as drag kings.

The term drag queen usually refers to people who dress in drag for the purpose of performing, whether singing or lip-synching, dancing, participating in events such as gay pride parades, drag pageants, or at venues such as cabarets and discotheques. In the United Kingdom, alongside traditional drag work such as shows and performances, many drag queens engage in 'mix-and-mingle' or hosting work at night clubs or at private parties/events. Drag is a part of Western gay culture; it is often noted that the Stonewall riots on June 27, 1969 in New York City were inspired and led by drag queens, and, in part for this reason, drag queens remain a tradition at gay pride events. Prominent drag queens in the gay community of a city often serve as official or unofficial spokespersons, hosts or emcees, fund-raisers, chroniclers and community leaders.

The etymology of the term "drag" is disputed. It was used in reference to transvestites at least as early as the 18th century, owing to the tendency of their skirts to drag on the ground.[citation needed] The term drag queen occurred in Polari, a subset of English slang that was popular in some gay communities in the early part of the 20th century. A folk etymology whose acronym basis reveals the late 20th-century bias, would make "drag" an abbreviation of "dressed resembling a girl" in description of male transvestism. Queen may refer to the trait of affected royalty found in many drag characters. It is also related to the archaic word "quean" which was used as a label both for promiscuous women and gay men (see Oxford English Dictionary definition number 3 for "queen").

Another term for a drag queen female impersonator, is still used—though it is often regarded as inaccurate, because many contemporary drag performers are not attempting to pass as women. Female impersonation, has been and continues to be illegal in some places, which inspired the drag queen José Sarria to hand out labels to his friends reading "I am a boy," so he could not be accused of female impersonation.[1] American drag queen RuPaul once said "I do not impersonate females! How many women do you know who wear seven-inch heels, four-foot wigs, and skintight dresses?" He also said, "I don't dress like a woman; I dress like a drag queen!". Celebrity drag couple "The Darling Bears" go so far as to sport full beards for their performances. Going in drag while retaining clearly masculine features is referred to as skag drag. Some performers draw the distinction that a female impersonator seeks to emulate a specific female star or celebrity, while a drag queen only seeks to create a distinctive feminine persona of his or her own.

There are also performers who prefer to be called "gender illusionists" who do blur the line between transgender and drag queen. Generally transgender performers do not consider themselves to be drag queens and drag queens don't consider themselves to be illusionists, but, as with everything, there are exceptions. Often these distinctions are more generational as laws and acceptance of individuality change and grow. 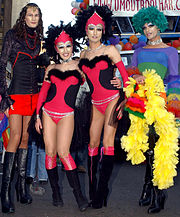 Drag queens walking in a parade in São Paulo, Brazil.

Most drag queens perform for personal fulfillment as a hobby, a profession, or an art form; as a way to be in the spotlight; or as a road to local or wider fame. Historically and currently, there have been and are a significant number of heterosexual men, generally actors, who perform in drag. There are also transgender or transsexual people, as well as straight women, who perform as drag queens.

Drag queens are sometimes called transvestites, although that term also has many other connotations than the term "drag queen". "Drag queen" usually connotes cross-dressing for the purposes of entertainment or performance without necessarily aiming to pass as female. It is not generally used to describe those persons who cross-dress for the fulfillment of transvestic fetishes alone, or whose cross-dressing is primarily part of a private sexual activity or identity. As for those whose motivation is not primarily sexual, and who may socialise cross-dressed, they tend not to adopt the typical over-the-top drag queen look.

There tend to be three types of drag names: The first are satirical names that play on words, such as Miss Understood, Peaches Christ, Ciara Mist, and Lypsinka.

The second type are names that trend toward glamour and extravagance, such as Dame Edna Everage, Chi Chi LaRue, Margo Howard-Howard, Betty "Legs" Diamond and The Lady Chablis. This is the type used by the character Albin in the movie and musical La Cage Aux Folles for his drag persona, "Miss ZaZa Napoli".

The third type is considered simpler but can have an in-depth backstory, cultural or geographical significance or simply be a feminine form of their "boy" name. Often a drag queen will pick a name or be given one by a friend or "drag mother" as a one-time occasion only to discover they like performing and go on to use a less-than ideal name for years. Drag queens do change names as well even using two or more concurrently for various reasons. Some examples of simpler names include Verka Serduchka, Miss Coco Peru, Shequida, Rikki Reeves, Betty Butterfield and Divine.

A drag show is an entertainment consisting of a variety of songs, monologues or skits featuring either single performers or groups of performers in drag meant to entertain an audience. They range from amateur performances at small bars to elaborately staged theatrical presentations. Many drag shows feature performers singing or lip-synching to songs while performing a pre-planned pantomime, or dancing. The performers often don elaborate costumes and makeup, and sometimes dress to imitate various famous female singers or personalities. And some events are centered around drag, such as Southern Decadence where the majority of festivities are led by the Grand Marshals, who are traditionally drag queens.[3] 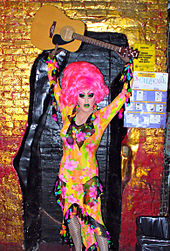 Miss Understood, who has appeared in several films and on television

Some male music celebrities wear exagerated feminine clothing as part of their show, but they should not be necessarily called drag queens. Boy George wears drag queen style clothes and cosmetics but he once stated he was not a drag queen.[8] RuPaul[9] and Pete Burns are professional singers and drag queen performers.

Drag queens in lyrycal interpretation of some songs: 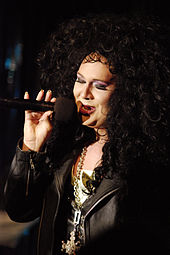 A drag queen doing a celebrity impersonation of a gay icon, Cher.

Drag has come to be a celebrated aspect of modern gay life. Many gay bars and clubs around the world hold drag shows as special parties. Several "International Drag Day" holidays have been started over the years to promote the shows. Typically, in the U.S. drag is celebrated in early March. This year, "Drag Day" falls on March 6.

However, within the larger lesbian, gay, bisexual, transgender (LGBT) communities drag queens are sometimes criticized for their participation in pride parades and other public events, believing that this projects a limited and harmful image of gay people and impedes a broader social acceptance. In more recent years drag queens have been prominently featured at these same events. A common criticism of drag queens is that they promote harmful stereotypes of women, comparable to blackface portrayal of African-Americans by white performers that was popular in the early 20th century.

Drag queens are sometimes criticized by members of the transgender community—especially, but not exclusively, by many trans women—because of fears that they themselves may be stereotyped as drag queens. Canadian transgender activist Star Maris wrote a song entitled "I'm Not A Fucking Drag Queen" which expresses this viewpoint. The song was featured in the film Better Than Chocolate, performed by a male-to-female transsexual on stage at a gay club. The transsexual character, played by Peter Outerbridge, struggles throughout the movie to fit in with cisgender (non-transgender) women, and partially performs the song as an act of cathartic defiance and self-empowerment. Other transwomen reject those fears in the broader context that drag queens, many of whom are gender-variant and sexuality minorities, are more of an ally than a threat.