Danish straits
Not to be confused with Denmark Strait. 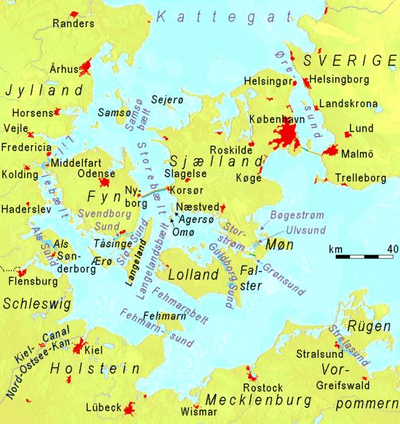 "Belts" and "Sounds" in Denmark and southwestern Baltic Sea

The Danish straits are the three channels connecting the Baltic Sea to the North Sea through the Kattegat and Skagerrak. They transect Denmark, and are not to be confused with the Denmark Strait between Greenland and Iceland. The three main passages are:

By closer view there are five straits named belt (Danish: Bælt), the only ones in the world and several straits named sound (Danish, Swedish and German: sund). Where an island is situated between a belt and a sound, typically the broader strait is called belt and the more narrow one is the sound: 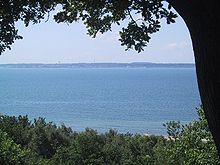 The Øresund,
seen from Helsingborg

Etymology and general use of Sound / Sund

The Germanic word "sound" has the same root as the verb "to sunder" in the meaning of to separate. In Swedish language any strait is called "Sund". In Norway hundreds of narrow straits separating islands and combining Fjords or outer parts of Fjords are named "Sund". Another explanation derives Sound from an ancient verb "sund" in the meaning of to swim. That way a sound is a swimmable strait.

With the denomination of fjords and other bays in North America (Prince William Sound) and New Zealand the European meaning of the word has been lost.

The Germanic word "sound" is not related to the Romance originated word "sound", which has developed from the Latin sonus.