Padma Bhushan, Supradipta-Manyabara-Nepal-Tara Tenzing Norgay, GM (late May 1914 – 9 May 1986) born Namgyal Wangdi and often referred to as Sherpa Tenzing, was a Nepalese Sherpa mountaineer. Among the most famous mountain climbers in history, he was one of the first two individuals known to have reached the summit of Mount Everest, which he accomplished with Edmund Hillary on 29 May 1953.[1] He was named by Time Magazine as one of the 100 most influential people of the 20th century.

There are conflicting accounts of his early life. The account that he gave in his first autobiography, accepted for several years, is that he was a Sherpa born and brought up in Tengboche, Khumbu in northeastern Nepal.[2] However more recent research has led to the claim that he was born a Tibetan in Kharta valley, Tibet, but his family were left destitute when their yaks were killed by disease, and he was sold as a bonded servant to a Sherpa family in Thamel in Nepal.[3]

Khumbu lies near Mount Everest, which the Tibetans and Sherpas call Chomolungma which in Tibetan means Holy Mother. He was a Buddhist, the traditional religion of the Sherpas and Tibetans.

His exact date of birth is not known, but he knew it was in late May by the weather and the crops. After his ascent of Everest on 29 May, he decided to celebrate his birthday on that day thereafter. His year of birth according to the Tibetan Calendar was the year of the rabbit, making it likely that he was born in 1914.[2]

He was originally called "Namgyal Wangdi", but as a child his name was changed on the advice of the head lama and founder of the famous Rongbuk Monastery, Ngawang Tenzin Norbu.[4] Tenzing Norgay translates as "wealthy-fortunate-follower-of-religion". His father, a yak herder, was Ghang La Mingma (d. 1949) and his mother was Dokmo Kinzom (who lived to see him climb Everest); he was the 11th of 13 children, most of whom died young.[2]

He ran away from home twice in his teens, first to Kathmandu and later Darjeeling. He was once sent to Tengboche Monastery to be a monk but decided that it was not for him and departed.[5] At the age of 19, he eventually settled in the Sherpa community in Too Song Bhusti in Darjeeling. 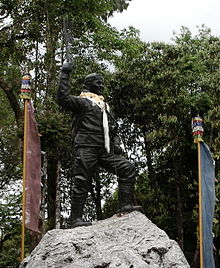 Tenzing got his first opportunity to join an Everest expedition when in 1935 he was employed by Eric Shipton, leader of the reconnaissance expedition that year. As a young 19 year old his chance came when two of the others failed their medical. As a friend of Angtharkay he was quickly pushed forward and his attractive smile caught the eye of Shipton who decided to take him on.

Tenzing took part as a high-altitude porter in three official British attempts to climb Everest from the northern Tibetan side in the 1930s.[2]

He also took part in other climbs in various parts of the Indian subcontinent, and for a time in the early 1940s he lived in what is now Pakistan, in the Princely State of Chitral as batman to a Major Chapman. His first wife died during his tenure there and was buried there. His return to Darjeeling with his seven daughters took place during the Indian partition of 1947.[2]

In 1947, he took part in an unsuccessful summit attempt of Everest. Canadian-born Earl Denman, Ange Dawa Sherpa, and Tenzing entered Tibet illegally to attempt the mountain; the attempt ended when a strong storm at 22,000 ft (6,700 m) pounded them. Denman admitted defeat and all three turned around and safely returned.[2]

In 1952, he took part in two Swiss expeditions led by Raymond Lambert, the first serious attempts to climb Everest from the southern (Nepal) side, during which he and Lambert reached the then-record height of 28,215 ft (8,599 m).[2] 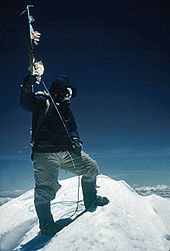 On the summit of Mount Everest, 29 May 1953. Photo taken by Edmund Hillary

In 1953, he took part in John Hunt's expedition, his own seventh expedition to Everest. A member of the team was Edmund Hillary, who had a near-miss following a fall into a crevasse, but was saved from hitting the bottom by Tenzing's prompt action in securing the rope using his ice axe, which led Hillary to consider him the climbing partner of choice for any future summit attempt.[6]

The Hunt expedition totalled over 400 people, including 362 porters, twenty Sherpa guides and 10,000 lbs of baggage,[7] and like many such expeditions, was a team effort.

The expedition set up base camp in March 1953. Working slowly it set up its final camp at the South Col at 25,900 feet (7,890 m). On 26 May Bourdillon and Evans attempted the climb, but turned back when Evans' oxygen system failed. The pair had reached the South Summit, coming within 300 vertical feet (91 m) of the summit.[8] Hunt then directed Tenzing and Hillary to go for the summit.

Snow and wind held the pair up at the South Col for two days. They set out on 28 May with a support trio of Ang Nyima, Alfred Gregory and George Lowe. The two pitched a tent at 27,900 feet (8,500 m) on 28 May while their support group returned down the mountain. On the following morning Hillary discovered that his boots had frozen solid outside the tent. He spent two hours warming them before he and Tenzing attempted the final ascent wearing 30-pound (14 kg) packs.[9] The crucial move of the last part of the ascent was the 40-foot (12 m) rock face later named the "Hillary Step". Hillary saw a means to wedge his way up a crack in the face between the rock wall and the ice and Tenzing followed.[10] From there the following effort was relatively simple. They reached Everest's 29,028 ft (8,848 m) summit, the highest point on Earth, at 11:30 a.m.[11] As Hillary put it, "A few more whacks of the ice axe in the firm snow, and we stood on top."[12]

They spent only about fifteen minutes at the summit. Hillary took the famous photo of Tenzing posing with his ice-axe, but since Tenzing had never used a camera, Hillary's ascent went unrecorded.[13][14] Additional photos were taken looking down the mountain in order to re-assure that they had made it to the top and that the ascent was not faked.[15] The two had to take care on the descent after discovering that drifting snow had covered their tracks, complicating the task of retracing their steps. The first person they met was Lowe, who had climbed up to meet them with hot soup.

Afterwards, Tenzing was met with great adulation in India and Nepal. Hillary and Hunt were knighted by Queen Elizabeth,[16] while Tenzing received either the British Empire Medal,[12] or the George Medal from the British Government for his efforts with the expedition.[4][17] It has been suggested that Indian prime minister Jawaharlal Nehru refused permission for Tenzing to be knighted.[4]

Tenzing and Hillary were the first people to conclusively set their feet on the summit of Mount Everest, but journalists were persistently repeating the question which of the two men had the right to the glory of being the first one, and who was merely the second, the follower. Colonel Hunt, the expedition leader, declared, "They reached it together, as a team." Tenzing stressed the unity of such teams and of their achievements. He shrugged off the allegation of ever being pulled by anyone, but disclosed that Hillary was the first to put his foot on the summit. He concluded: "If it is a shame to be the second man on Mount Everest, then I will have to live with this shame."[citation needed] Tenzing stuck an ice axe into Mount Everest with the flags of India, Nepal, the UK and the UN fluttering from it.[2][8]

All the photos of the mountaineers on the top show only Tenzing. When asked why there were no photos featuring Hillary, Sir Edmund replied, "Tenzing did not know how to operate the camera and the top of Everest was no place to start teaching him how to use it." Hillary and Tenzing remained friends throughout their lives. 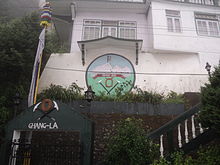 Tenzing was married three times. His first wife, Dawa Phuti, died young in 1944. They had a son, Nima Dorje, who died at the age of four, and two daughters: Pem Pem, whose son Tashi Tenzing climbed Everest, and Nima, who married a Filipino graphic designer, Noli Galang. Tenzing's second wife was Ang Lahmu, a cousin of his first wife. They had no children, but she was a foster-mother to his daughters. His third wife was Dakku, whom he married while his second wife was still alive, as allowed by Sherpa custom (see polygyny). They had three sons (Norbu, Jamling, and Dhamey), and one daughter, Deki. Other relatives include his nephews Nawang Gombu and Topgay who took part in the 1953 Everest expedition.[2][18]

Tenzing is a very popular name for male and female Tibetans. The word Tenzing originates from Tibet, and means "equilibrium in all its essence" or alternatively, "keeper of Buddha's teachings". Tenzing is the most common name in the Tibetan region.[citation needed]

Tenzing never learned to read or write, but he spoke several languages. His native language was either Sherpa or Tibetan (he did speak both from an early age). As an adult he learned to speak fluent Nepalese.[2] He was also reasonably proficient in English. 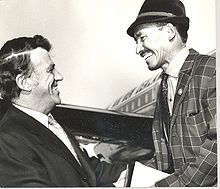 In January 1975, upon permission of the new king of Bhutan, Jigme Singye Wangchuck, Tenzing served as sirdar (guide) for the first American tourist party allowed into the country (see Dragonfly Wars blog [3] and 28 June 1992 Boulder Daily Camera article, "Trek through Time," p. 1C, 3C). Brought together by a company then called Mountain Travel (and now called Mountain Travel-Sobek), the group first met Tenzing in India before beginning the trek. The official trek began in Paro, northern Bhutan, and included a visit to Tiger's Nest (Taktsang), the ancient Buddhist monastery, before returning to India via Nepal and Sikkim. Tenzing even introduced his group to the King of Sikkim (the last king of that country, which is now a part of India), and brought them to his home in India for a farewell celebration. 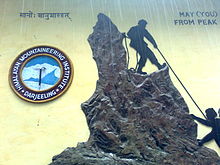 May (You) climb from peak to peak

Tenzing later became director of field training for the Himalayan Mountaineering Institute in Darjeeling. In 1978, he founded Tenzing Norgay Adventures,[19] a company providing trekking adventures in the Himalayas. As of 2003, the company was run by his son Jamling Tenzing Norgay, who himself reached the summit of Everest in 1996.

Tenzing also received several other decorations through his career. 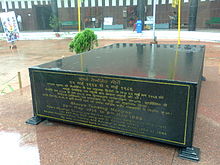 Tenzing died of a cerebral hemorrhage in Darjeeling, West Bengal, India, in 1986, at age 71. He was cremated in Himalayan Mountaineering Institute, Darjeeling, his favorite haunt.