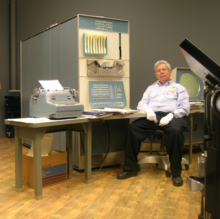 PDP-1 at the Computer History Museum with Steve Russell, creator of Spacewar!. The large cabinet houses the processor itself. The main control panel is just above the desk, the paper tape reader is above it (metallic), and the output of the Teletype model BRPE paper tape punch above that (vertical slot). A storage tray for 8 fanfold paper tapes is attached to the top panel. At the left is the IBM Model B typewriter modified by Soroban, and the Type 30 vector CRT display is to the far right.

The PDP-1 (Programmed Data Processor-1) was the first computer in Digital Equipment Corporation's PDP series and was first produced in 1960. It is famous for being the computer most important in the creation of hacker culture at MIT, BBN and elsewhere.[1] The PDP-1 was also the original hardware for playing history's first game on a minicomputer, Steve Russell's Spacewar!.

The PDP-1 used an 18-bit word size and had 4096 words as standard main memory (equivalent to 9,216 eight-bit bytes, though the system actually used six-bit bytes), upgradable to 65,536 words. The magnetic core memory's cycle time was 5 microseconds (corresponding roughly to a "clock speed" of 200 kilohertz; consequently most arithmetic instructions took 10 microseconds (100,000 operations per second) because they used two memory cycles: one for the instruction, one for the operand data fetch. Signed numbers were represented in one's complement.

The PDP-1 was built mostly of DEC 1000-series System Building Blocks, using Micro-Alloy and Micro-Alloy-Diffused transistors with a rated switching speed of 5 MHz. The System Building Blocks were packaged into several 19-inch racks. The racks were themselves packaged into a single large mainframe case, with a hexagonal control panel containing switches and lights mounted to lay at table-top height at one end of the mainframe. Above the control panel was the system's standard input/output solution, a punch tape reader and writer.

The design of the PDP-1 was based on the pioneering TX-0 computer, designed and built at MIT Lincoln Laboratory. The first PDP-1 was delivered to Bolt, Beranek and Newman (BBN) in November 1960,[2][3] and formally accepted the next April.[4] In 1962, DEC donated the engineering prototype PDP-1 to MIT, where it was placed in the room next to its ancestor, the TX-0 computer, which was by then on indefinite loan from Lincoln Laboratory.

In this setting, the PDP-1 quickly replaced the TX-0 as the favourite machine among the budding hacker culture, and served as the platform for a wide variety of "firsts" in the computing world. Perhaps best known among these is the first computerized video game, Spacewar!, but among the list are the first text editor, word processor, interactive debugger, the first credible computer chess program, and some of the earliest computerized music.[5]

The PDP-1 sold in basic form for US$120,000 ($880,000 in 2011).[6] BBN's system was quickly followed by orders from Lawrence Livermore and Atomic Energy of Canada (AECL), and eventually 53 PDP-1s were delivered until production ended in 1969.[7][8] All of these machines were still being actively used in 1970, and several were eventually saved. MIT's example was donated to The Computer Museum, Boston, and from there ended up at the Computer History Museum (CHM). A late version of Spacewar! on paper tape was still tucked into the case. PDP-1 #44 was found in a barn in Wichita, Kansas in 1988, apparently formerly owned by one of the many aviation companies in the area, and rescued for the Digital Historical Collection, also eventually ending up at the CHM.[9] AECL's computer was sent to Science North, but was later scrapped. 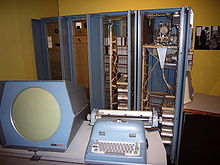 The PDP-1 used punched paper tape as its primary storage medium. Unlike punched card decks, which could be sorted and re-ordered, paper tape was difficult to physically edit. This inspired the creation of text-editing programs such as Expensive Typewriter and TECO. Because it was equipped with online and offline printers that were based on IBM electric typewriter mechanisms, it was capable of what, in 1980s terminology, would be called "letter-quality printing" and therefore inspired TJ-2, arguably the first word processor.

The console typewriter was the product of a company named Soroban Engineering. It was an IBM Model B Electric typewriter mechanism modified by the addition of switches to detect keypresses and solenoids to activate the typebars. It used a traditional typebar mechanism, not the "golfball" IBM Selectric typewriter mechanism, which was not introduced until the next year. Lettercase was selected by raising and lowering the massive type basket. The Soroban was equipped with a two-color ribbon (red and black), and the interface allowed color selection. Programs commonly used color coding to distinguish user input from machine responses. The Soroban mechanism was unreliable and prone to jamming, particularly when shifting case or changing ribbon color, and was widely disliked.

Offline devices were typically Friden Flexowriters that had been specially built to operate with the FIO-DEC character coding used by the PDP-1. Like the console typewriter, these were built around a typing mechanism that was mechanically the same as an IBM Electric typewriter.[10] However, Flexowriters were highly reliable and often used for long unattended printing sessions. Flexowriters had electromechanical paper tape punches and readers which operated synchronously with the typewriter mechanism. Typing was performed about ten characters per second. A typical PDP-1 operating procedure was to output text to punched paper tape using the PDP-1's "high speed" (60 character per second) Teletype model BRPE punch, then to hand carry the tape to a Flexowriter for offline printing.

In later years, DECtape drives were added to some PDP-1 systems, as a more convenient method of backing up programs and data, and to enable early timesharing. This latter application usually required a secondary storage medium for swapping programs and data in and out of core memory, without requiring manual intervention. For this purpose, DECtapes were far superior to paper tapes, in terms of reliability, durability, and speed. Early hard disks were expensive and notoriously unreliable; if available and working, they were used primarily for speed and not for permanent file storage.

MIT hackers also used the PDP-1 for playing music in four-part harmony, using some special hardware — four flip-flops directly controlled by the processor (the audio signal was filtered with simple RC filters). Music was prepared via Peter Samson's Harmony Compiler, a sophisticated text-based program with some features specifically oriented toward the efficient coding of baroque music. Several hours of music were prepared for it, including Bach fugues, all of Mozart's Eine kleine Nachtmusik, Christmas carols, and numerous popular songs. 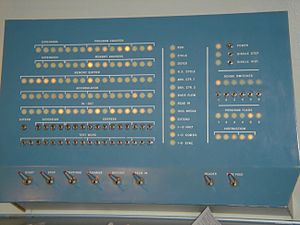 Only three PDP-1 computers are still known to exist, and all three are in the collection of the Computer History Museum (CHM). One is the prototype formerly used at MIT, and the other two are production PDP-1C machines. One of the latter, serial number 55 (the last PDP-1 made) has been restored to working order, is on exhibit, and is demonstrated on two Saturdays every month. The restoration is described on a special web page of the Computer History Museum. The demonstrations include:

At the Computer History Museum TX-0 alumni reunion in 1984, Gordon Bell said DEC's products developed directly from the TX-2, the successor to the TX-0 which had been developed at what Bell thought was a bargain price at the time, about US$3 million. At the same meeting, Jack Dennis said Ben Gurley's design for the PDP-1 was influenced by his work on the TX-0 display. [11]

Software simulations of the PDP-1 exist in SIMH and MESS, and binary image paper tapes of the software exist in the bitsavers.org archives.