Being born into an artistic and wealthy family, he received a good education that led to his holding prominent positions at Cambridge University and Parliament. As a student at Trinity College, Cambridge, Herbert excelled in languages and music. He went to college with the intention of becoming a priest, but his scholarship attracted the attention of King James I/VI. Herbert served in parliament for two years. After the death of King James and at the urging of a friend, Herbert's interest in ordained ministry was renewed.

In 1630, in his late thirties he gave up his secular ambitions and took holy orders in the Church of England, spending the rest of his life as a rector of the little parish of Fugglestone St Peter with Bemerton St Andrew, near Salisbury. He was noted for unfailing care for his parishioners, bringing the sacraments to them when they were ill, and providing food and clothing for those in need. Henry Vaughan said of him"a most glorious saint and seer".[1]

Throughout his life, he wrote religious poems characterized by a precision of language, a metrical versatility, and an ingenious use of imagery or conceits that was favoured by the metaphysical school of poets.[2] Charles Cotton described him as a "soul composed of harmonies".[3] Herbert himself, in a letter to Nicholas Ferrar, said of his writings, "they are a picture of spiritual conflicts between God and my soul before I could subject my will to Jesus, my Master".[4] Some of Herbert's poems have endured as hymns, including "King of Glory, King of Peace" (Praise), "Let All the World in Every Corner Sing" (Antiphon) and "Teach me, my God and King" (The Elixir).[5]

A distant relative is the modern Polish poet Zbigniew Herbert.[6]

Herbert was born in Montgomery in Wales. His family was wealthy, eminent, intellectual and fond of the arts. His mother Magdalen was a patron and friend of John Donne and other poets;[7] his older brother Edward, later Lord Herbert of Cherbury, was an important poet and philosopher, often referred to as "the father of English deism". Herbert's father Richard Herbert, Lord of Cherbury died when George was three, leaving a widow and ten children.[8]

Herbert entered Westminster School at or around the age of 12 where he became a day student.[8] Though sometime after he was elevated to the level of scholar. Herbert later was admitted on scholarship to Trinity College, Cambridge in 1609 where he graduated first with a Bachelors and then with a masters degree in 1613 at the age of 20.[8] After graduating from Westminster School and Trinity College, Cambridge (where he achieved degrees with distinction), Herbert was elected a major fellow of his college. In 1618 he was appointed Reader in Rhetoric at Cambridge and in 1620 he was elected to the post of Cambridge University orator, whose duties would be served by poetic skill. He held this position until 1628.[9]

In 1624 he became a Member of Parliament, representing Montgomery.[10] While these positions were suited to a career at court, and James I had shown him favour, circumstances worked against him: the King died in 1625, and two influential patrons of Herbert died later in the decade. However George Herbert's only service to parliament may have already ended in 1624 or since, although a Mr Herbert is mentioned as a committee member, there is no record in the Commons Journal for 1625 of Mr. George Herbert (a distinction carefully made in the records of the preceding parliament).[8]

He took up his duties in Bemerton, a rural parish in Wiltshire, about 75 miles southwest of London in 1630. Here he preached and wrote poetry; also helping to rebuild the church out of his own funds.[8]

In 1633 Herbert finished a collection of poems entitled The Temple, which imitates the architectural style of churches through both the meaning of the words and their visual layout. The themes of God and love are treated by Herbert as much as psychological forces as metaphysical phenomena.

Suffering from poor health, Herbert died of tuberculosis only three years after taking holy orders. On his deathbed, he reportedly gave the manuscript of The Temple to Nicholas Ferrar, the founder of a semi-monastic Anglican religious community at Little Gidding (a name best known today through the poem Little Gidding by T. S. Eliot), telling him to publish the poems if he thought they might "turn to the advantage of any dejected poor soul", and otherwise, to burn them. 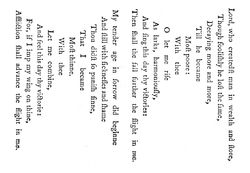 Herbert's "Easter Wings", a pattern poem in which the work is not only meant to be read, but its shape is meant to be appreciated: In this case, the poem was printed (original image here shown) on two pages of a book, sideways, so that the lines suggest two birds flying upward, with wings spread out.

In 1633 (see 1633 in poetry), all of Herbert's poems were published in The Temple: Sacred poems and private ejaculations, edited by Nicholas Ferrar. The book went through eight editions by 1690.[11]

Barnabas Oley edited in 1652 Herbert's Remains, or sundry pieces of that Sweet Singer, Mr. George Herbert, containing A Priest to the Temple, or the countrey parson, Jacula Prudentum, &c. Prefixed was an unsigned preface by Oley. The second edition appeared in 1671 as A Priest to the Temple or the Country Parson, with a new preface, signed Barnabas Oley. These pieces were reprinted in later editions of Herbert's Works. The manuscript of The Country Parson was the property of Herbert's friend, Arthur Wodenoth, who gave it to Oley; the prefaces were a source for Izaak Walton's memoir of Herbert.

All of Herbert's English surviving poems are religious, and some have been used as hymns, William Cowper said of them I found in them a strain of piety which I could not but admire.[12] They are characterised by directness of expression and some conceits which can appear quaint. Many of the poems have intricate rhyme schemes, and variations of lines within stanzas described as 'a cascade of form floats through the temple'.[13]

An example of Herbert’s religious poetry is “The Altar.” A "pattern poem in which the words of the poem itself form a shape suggesting an altar, and this altar becomes his conceit for how one should offer himself as a sacrifice to the Lord. He also makes allusions to scripture, such as Psalm 51:17, where it states that the Lord requires the sacrifice of a broken heart and a contrite spirit.

Herbert also wrote A Priest to the Temple (or The Country Parson) offering practical advice to clergy. In it, he advises that "things of ordinary use" such as ploughs, leaven, or dances, could be made to "serve for lights even of Heavenly Truths".

Richard Baxter said, "Herbert speaks to God like one that really believeth a God, and whose business in the world is most with God. Heart-work and heaven-work make up his books". Dame Helen Gardner adds "head-work" because of his "intellectual vivacity".

Herbert also wrote poems in Greek and in Latin. The latter mainly concern ceremonial controversy with the Puritans, but include a response to Pope Urban VIII's treatment of the ROMA AMOR anagram. He was also a collector of "Outlandish proverbs", some of which are used in his poem The Sacrifice.[15] and he wrote in many poetic forms, appropriate to their theme,and invented, as it were, to embody them [16]

He is commemorated on 27 February throughout the Anglican Communion and on 1 March of the Calendar of Saints of the Evangelical Lutheran Church in America.

Herbert has a window honouring him in Westminster Abbey.[17] and a statue in niche 188 on the West Front of Salisbury Cathedral.