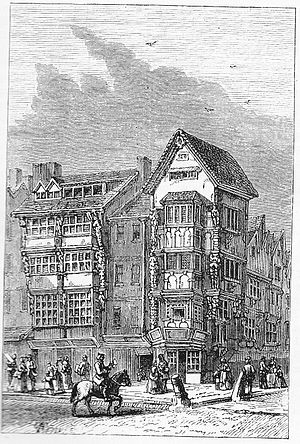 Izaak Walton (9 August 1593 – 15 December 1683) was an English writer. Best known as the author of The Compleat Angler, he also wrote a number of short biographies which have been collected under the title of Walton's Lives.

Walton was born at Stafford; the register of his baptism gives his father's name as Gervase. His father, who was an innkeeper as well as a landlord of a tavern, died before Izaak was three. His mother then married another innkeeper by the name of Bourne, who would later run the Swan in Stafford.

He settled in London where he began trading as an ironmonger in a small shop in the upper story of Thomas Gresham's Royal Burse or Exchange in Cornhill. In 1614 he had a shop in Fleet Street, two doors west of Chancery Lane in the parish of St Dunstan's.[1] At about this time he became friendly with Dr John Donne, then vicar of the parish church.

Walton's first wife was Rachel Floud (married December 1626), a great-great-niece of Archbishop Cranmer. She died in 1640. He married again soon after, his second wife being Anne Ken—the pastoral Kenna of The Angler's Wish—stepsister of Thomas Ken, afterwards bishop of Bath and Wells.

After the Royalist defeat at Marston Moor, Walton retired from his trade. He went to live near his birthplace in Stafford, where he had bought some land, including a farm and a parcel of land at Shallowford (now the Izaak Walton Cottage Museum); but by 1650 he was again living in Clerkenwell. The first edition of his famous book The Compleat Angler was published in 1653. His second wife died in 1662, and was buried in Worcester Cathedral, where there is a monument to her memory. One of his daughters married Dr Hawkins, a prebendary of Winchester. 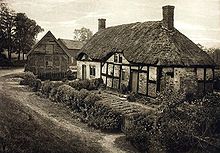 The last forty years of his long life seem to have been spent in ideal leisure and occupation, visiting eminent clergymen and others who enjoyed fishing, compiling the biographies of congenial spirits, and collecting here a little and there a little for the enlargement of his famous treatise. After 1662 he found a home at Farnham Castle with George Morley, bishop of Winchester, to whom he dedicated his Life of George Herbert and also that of Richard Hooker, and from time to time he visited Charles Cotton in his fishing house on the Dove. He died in his daughter's house at Winchester, and was buried in the cathedral there. It is characteristic of his kindly nature that he left his property at Shallowford for the benefit of the poor of his native town. Izaak Walton purchased Halfhead Farm in May 1655. The cost was £350 and the property included a farmhouse, a cottage, courtyard, garden and nine fields. Part of its attraction may have been that the River Meece, which he mentions in one of his poems, formed part of the boundary. The farm was let to tenants. In his will Izaak Walton left the farm to the town of Stafford. The annual rent was to be used to benefit the poor of the town. In 1837 the Grand Junction Railway was built across the land to the west cutting the buildings off from the river. The farm and the cottage continued to be tenanted, until 1920 when the property was offered for sale, but in a derelict state. Local Stafford businessmen formed the The Izaak Walton Cottage Trust to establish a small museum dedicated to the famous writer. They raised £50 to purchase the site and another £500 needed to repair the dilapidated cottage building. Lord Stafford performed the opening ceremony on 30th April 1924. In 1927 sparks from the steam trains caused a fire that destroyed the thatched roof, and the museum was closed for a year. Unfortunately another fire occurred in 1938, and following further restoration, in 1939 the cottage re-opened, this time with a tiled roof. The Trust wound up in 1965 and the building was taken over by Stafford Borough Council. During the 1990s the thatched roof was restored. The ground floor of the museum is set-out in period and has a series of illustrated information boards covering Walton's life, his writings and the story of the Izaak Walton Cottage. Up-stairs may be found a collection of fishing related items, the earliest dating from the mid-eighteenth century, while a room has been dedicated to his 'Lives' and to 'The Complete Angler.' The Izaak Walton Cottage is open to the public on Sunday afternoons during the high summer months. 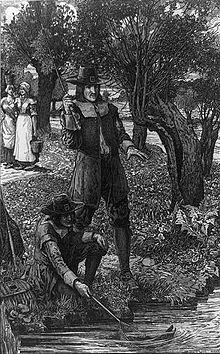 Izaak Walton and his scholar.
Woodcut by Louis Rhead. 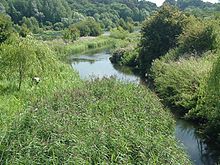 The River Lea at Amwell, home of the Amwell Magna Fishery, was fished by Izaak Walton 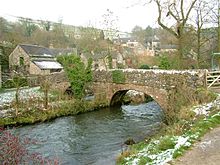 Viator's bridge near Milldale (Peak District) is named for its reference in The Compleat Angler.

The Compleat Angler was first published in 1653, but Walton continued to add to it for a quarter of a century. It is a celebration of the art and spirit of fishing in prose and verse; 6 verses were quoted from John Dennys's 1613 work Secrets of Angling. It was dedicated to John Offley, his most honoured friend. There was a second edition in 1655, a third in 1661 (identical with that of 1664), a fourth in 1668 and a fifth in 1676. In this last edition the thirteen chapters of the original have grown to twenty-one, and a second part was added by his friend and brother angler Charles Cotton, who took up Venator where Walton had left him and completed his instruction in fly fishing and the making of flies.

Walton did not profess to be an expert with the fly; the fly fishing in his first edition was contributed by Thomas Barker, a retired cook and humorist, who produced a treatise of his own in 1659; but in the use of the live worm, the grasshopper and the frog "Piscator" himself could speak as a master. The famous passage about the frog, often misquoted as being about the worm—"use him as though you loved him, that is, harm him as little as you may possibly, that he may live the longer"—appears in the original edition. The additions made as the work grew did not affect the technical part alone; happy quotations, new turns of phrase, songs, poems and anecdotes were introduced as if the leisurely author, who wrote it as a recreation, had kept it constantly in his mind and talked it over point by point with his numerous brethren. There were originally only two interlocutors in the opening scene, "Piscator" and "Viator"; but in the second edition, as if in answer to an objection that "Piscator" had it too much in his own way in praise of angling, he introduced the falconer, "Auceps," changed "Viator" into "Venator" and made the new companions each dilate on the joys of his favourite sport.

The best-known old edition of the Angler is J Major's (2nd ed., 1824). The book was edited by Andrew Lang in 1896, and various modern editions have appeared. The standard biography is that by Sir Harris Nicolas, prefixed to an edition of the Angler (1836). There are notices also, with additional scraps of fact, annexed to two American editions, Bethune's (1847) and Dowling's (1857).

The full title of Walton's book of short biographies is, Lives of John Donne, Henry Wotton, Rich'd Hooker, George Herbert, &C. His leisurely labours as a biographer seem to have grown out of his devotion to angling. It was probably as an angler that he made the acquaintance of Sir Henry Wotton, but it is clear that Walton had more than a love of fishing and a humorous temper to recommend him to the friendship of the accomplished ambassador. At any rate, Wotton, who had intended to write the life of John Donne, and had already corresponded with Walton on the subject, left the task to him. Walton had already contributed an Elegy to the 1633 edition of Donne’s poems, and he completed and published the life, much to the satisfaction of the most learned critics, in 1640. Sir Henry Wotton dying in 1639, Walton undertook his life also; it was finished in 1642 and published in 1651. His life of Hooker was published in 1662, that of George Herbert in 1670 and that of Bishop Robert Sanderson in 1678. All these subjects were endeared to the biographer by a certain gentleness of disposition and cheerful piety; three of them at least—Donne, Wotton and Herbert—were anglers. Their lives were evidently written with loving pains, in the same leisurely fashion as his Angler, and like it are of value less as exact knowledge than as harmonious and complete pictures of character. An edition of Walton's Lives, by G Sampson, appeared in 1903. See also Izaak Walton and his Friends, by S Martin (1903).

Walton also rendered affectionate service to the memory of his friends Sir John Skeffington and John Chalkhill, editing with prefatory notices Skeffington's Hero of Lorenzo in 1652 and Chalkhill's Thealma and Clearchus a few months before his own death in 1683. His poems and prose fragments were collected in 1878 under the title of Waltoniana.

Walton has appeared in several works of literature:

Other references in media

In the 1946 thriller Terror by Night, Sherlock Holmes (Basil Rathbone), about to board a train, encounters Inspector Lestrade (Dennis Hoey) on the same train, ready to presumably go on a vacation, and loaded down with fishing gear. He later tells Dr. Watson (Nigel Bruce) that Lestrade is on the train "giving an excellent imitation of Izaak Walton". In the Doctor Who episode The Androids of Tara, the Doctor recollects an encounter with Sir Walton.

Also mentioned in A group of noble dames by Thomas Hardy, where his relation to fish is compared to the one of the Petrick family towards landed aristocracy.

At least two organisations have been inspired by and named after Izaak Walton. Inspired by The Compleat Angler, advertising mogul and land developer Barron Collier founded the Izaak Walton Fly Fishing Club in 1908 at his Useppa Island resort near Fort Myers, Florida. It was considered one of the most exclusive sporting clubs in the world. The Izaak Walton League is an American association of sportsmen that was formed in 1922 in Chicago, Illinois to preserve fishing streams. He was inducted into the American National Fresh Water Fishing Hall of Fame.[2]

The 17th century Izaak Walton Hotel at the south end of Dovedale commemorates his close association with that river - the hotel also owns the fishing rights on the Staffordshire bank of the Dove.

The Izaak Walton Inn at the Essex BNSF railroad depot on the west side of the Continental Divide, was so named to encourage use by fishermen and tourists. The inn was built to house 30 Great Northern Railway employees needed to keep the line open during the annual 8 months of winter before heavy mechanized equipment. The Izaak Walton Inn is on the National Register of Historic Places.