Devarayanadurga (Kannada: ದೇವರಾಯನ ದುರ್ಗ) is a hill station near Tumkur in the state of Karnataka in India. The rocky hills are surrounded by forest and the hilltops are dotted with several temples including the Yoganarasimha and the Bhoganarasimha temples and an altitude of 3940 feet. It is also famous for Namada Chilume, a natural spring considered sacred and is also considered the origin of the Jayamangali river. Another famous temple in the area is the Mahalakshmi Temple at Goravanahalli.

It is 65 km from Bangalore, India, by road on Tumkur road. The nearest railway station is 25 km away in Dabbaspet.

There are two routes to this place.

The place was originally known as Anebiddasari then as Jadakana Durga after a chief named Jadaka and finally as Devarayana Durga subsequent to its capture by Mysore king Chikka Devaraja Wodeyar.

The temple, built in the Dravidian style of architecture, faces east and is said to have been constructed by Kanthirava Narasaraja I. From the inscriptions numbered Tumkur 41 and 42, we learn that the enclosure and tower were repaired in 1858 by the Mysore king Krishnaraja Wodeyar III.

The TVS Group, a south Indian automobile company, has helped a great deal in the improvement and maintenance of the temple environs. 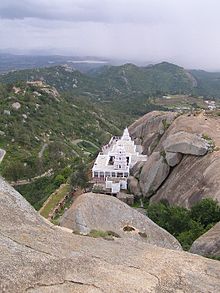 On the third elevation stands, facing east, a temple of Narasimha, known as the Kumbhi. This Narasimha temple consists of a Garbhagriha, a sukanasi, a navagraha and a mukhamantapa and is similar to the plan of the temple below. In addition to the temple there are three sacred ponds or Kalyani here known as Narasimha-teertha, Parasara-teertha and Pada-teertha.

There is also another temple, said to be older than Lakshmi Narasimha swamy, dedicated to Hanuman, also known as Sanjivaraya, who stands with folded hands.

Higher up above is a small shrine of Garuda.

Legend has it that the devotees of Hindu temples used to perform the ritual of circling the hills on which the temples were situated. As an effort to revive the practice, a large number of Devotees perform the Giri-pradakshina, organized by Vishwa Hindu Parishad (VHP).

Car Festival: Devarayana Durga Sri Bhoga Narasimhaswamy jathra/Car festival, an annual Car festival is held during Phalguna Masa shuddha poornima day somewhere in the Month of March/April in Devarayanadurga. On this day the chariot/car/Ratha of Sri Bhoga Narasimhaswamy is drawn in the main Ratha beedhi of the hill town. The festival draws devotees from all over Bangalore-Tumkur and surrounding region.

Narasimha Jayanthi: Devarayanadurga Sri Lakshminarasimhaswamy's Narasimha jayanthi, an annual celebration of Narasimha avathara day takes place during Chaitra Shudha chathurdashi (May month) at which thousands of people gather and many pendals are built to serve then with summer drinks like Panakam, buttermilk, phalamruth and free feeding is done to all devotees coming for the darshan of lord.

At the base of the hill on the road leading to Tumkur, is a place called Namada Chilume (chilume means spring). Myth has it that Sri Rama on his way to Lanka halted here. As he did not find water anywhere around to wet the "Nama" (a kind of paste Hindus apply on their forehead), he shot an arrow into the ground, and a spring sprang and thus the name (Rama)-Namada chilume. The spring can be still seen, and there is a foot impression of Lord Sri Rama near that.

Little away from the current government guest house, just facing the spring is an old, dilapidated guest house constructed in 1931. Dr. Salim Ali was said to have stayed in this guest house during his Ornithological visits to this place, around 1938. Interestingly enough there is a moist deciduous patch behind the old guest house, adjoining the huge rock face and Dr. Salim Ali had collected moist-deciduous species in this area, which are no longer to be seen now. 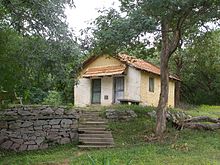 The forest department has developed a nursery of medicinal plants near Namada Chilume picnic spot on Devarayanadurga hills. There are about 300 varieties of rare ayurvedic plants in this nursery.

Only particular species of plants are cultivated on specified plots for easy identification of the plant varieties. The nursery is located at a forest spot beside Tumkur-Devarayanadurga bus route.

The nursery, known as the mini forest of medicinal plants, has been developed with the objective of conserving endangered species of plants on Devarayanadurga hills. this is one of the mythological important place