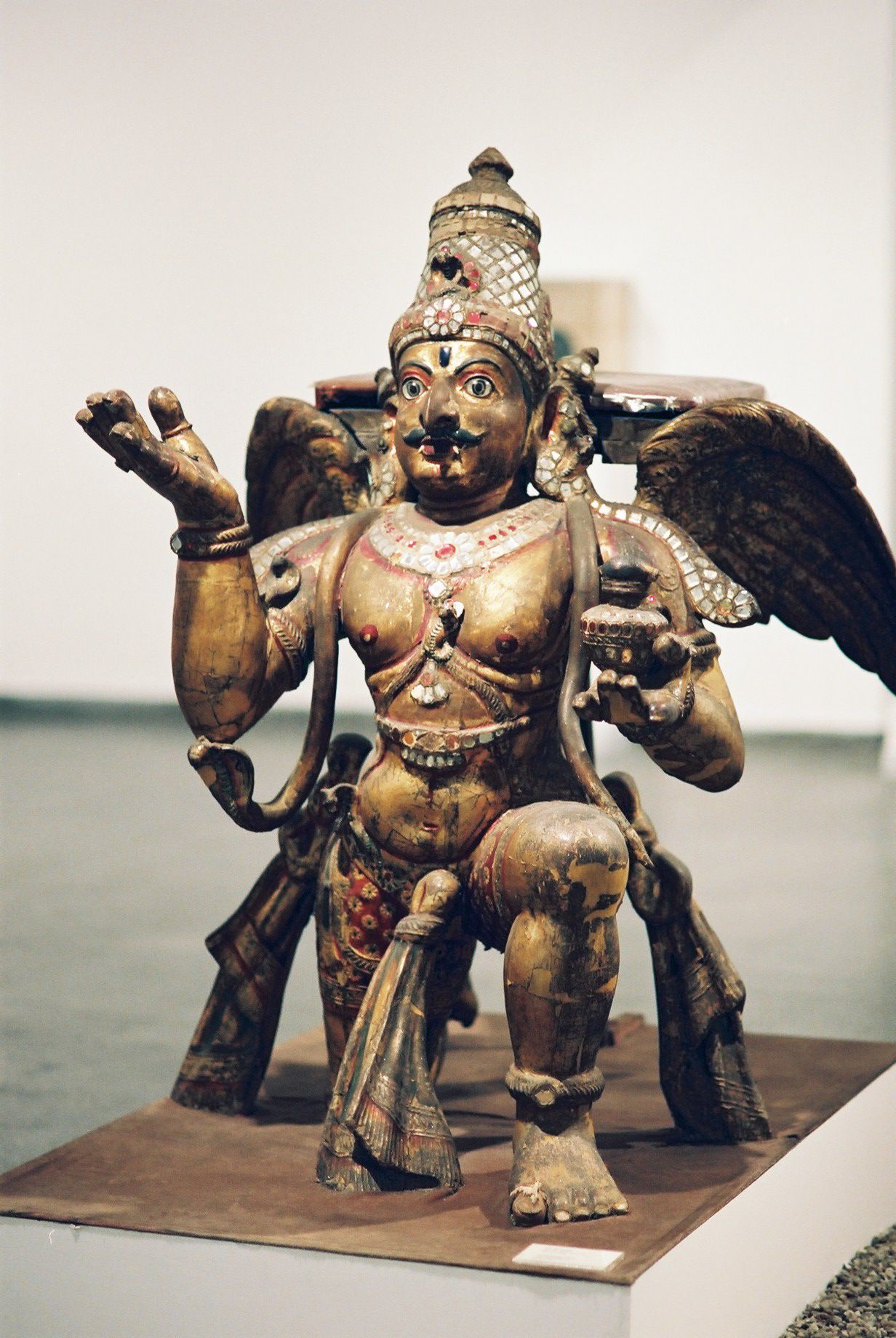 The Garuda (: IAST|Garuḍa गरुड, IAST|Garuḷa) is a large mythical bird or bird-like creature that appears in both Hindu and Buddhist mythology.

Garuda is the Hindu name for the Aquila.

In Hindu mythology, a IAST|Garuda is a lesser Hindu , usually the (m) of . IAST|Garuda is depicted as having a golden body, white face, red wings, and an eagle's beak, but with a man's body. He wears a crown on his head. He is ancient and has size enough to block out the .

His stature in Hindu religion can be gauged by the fact that an independent , the IAST|Garudopanidad, and a Purana, the , is devoted to him. Various names have been attributed to IAST|Garuda - Chirada, Gaganeshvara, Kamayusha, Kashyapi, Khageshvara, Nagantaka, Sitanana, Sudhahara, Suparna, Tarkshya, Vainateya, Vishnuratha and others. The provide the earliest reference of IAST|Garuda, though by the name of Śyena, where this mighty bird is said to have brought nectar to from . The Puranas, which came into existence much later, mention IAST|Garuda as doing the same thing, which indicates that Śyena (Sanskrit for Eagle) and IAST|Garuda are the same. One of the faces of Śrī Pañcamukha is Mahavira IAST|Garuda. This face points towards the west. Worship of IAST|Garuda is believed to remove the effects of poisons from one's body. In Tamil Garuda and are known as "Periya Thiruvadi" and "Siriya Thiruvadi" respectively.

In the (Ch.10, Verse 30), in the middle of the battlefied "Kurukshetra", Krishna explaining his , says - "Of birds, I am the son of (Garuda)" indicating the importance of Garuda.

Garuda plays an important role in Krishna Avatar in which Krishna and Satyabhama ride on Garuda to kill Narakasura. On another occasion, Lord Hari rides on Garuda to save the devotee Elephant Gajendra. It is also said that Garuda's wings when flying will chant the Vedas.

The story of Garuda's birth and deeds is told in the first book of the great epic . [Mahabharata, Book I: Adi Parva, Sections 23 ff.] According to the epic, when Garuda first burst forth from his egg, he appeared as a raging inferno equal to the cosmic conflagration that consumes the world at the end of every age. Frightened, the gods begged him for mercy. Garuda, hearing their plea, reduced himself in size and energy.

Garuda's father was the creator-rishi . His mother was , whose sister was , the mother of serpents. One day, Vinata entered into and lost a foolish bet, as a result of which she became enslaved to her sister. Resolving to release his mother from this state of bondage, Garuda approached the serpents and asked them what it would take to purchase her freedom. Their reply was that Garuda would have to bring them the elixir of immortality, also called . It was a tall order. The amrita at that time found itself in the possession of the gods, who guarded it jealously, since it was the source of their immortality. They had ringed the elixir with a massive fire that covered the sky. They had blocked the way to the elixir with a fierce mechanical contraption of sharp rotating blades. And finally, they had stationed two gigantic poisonous snakes next to the elixir as deadly guardians.

Undaunted, Garuda hastened toward the abode of the gods intent on robbing them of their treasure. Knowing of his design, the gods met him in full battle-array. Garuda, however, defeated the entire host and scattered them in all directions. Taking the water of many rivers into his mouth, he extinguished the protective fire the gods had thrown up. Reducing his size, he crept past the rotating blades of their murderous machine. And finally, he mangled the two gigantic serpents they had posted as guards. Taking the elixir into his mouth without swallowing it, he launched again into the air and headed toward the eagerly waiting serpents. En route, he encountered . Rather than fight, the two exchanged promises. Vishnu promised Garuda the gift of immortality even without drinking from the elixir, and Garuda promised to become Vishnu's mount. Flying onward, he met the god of the sky. Another exchange of promises occurred. Garuda promised that once he had delivered the elixir, thus fulfilling the request of the serpents, he would make it possible for Indra to regain possession of the elixir and to take it back to the gods. Indra in turn promised Garuda the serpents as food.

At long last, Garuda alighted in front of the waiting serpents. Placing the elixir on the grass, and thereby liberating his mother Vinata from her servitude, he urged the serpents to perform their religious ablutions before consuming it. As they hurried off to do so, Indra swooped in to make off with the elixir. From that day onward, Garuda was the ally of the gods and the trusty mount of Vishnu, as well as the implacable enemy of snakes, upon whom he preyed at every opportunity.

Also according to the , Garuda had six sons from whom were descended the race of birds. The members of this race were of great might and without compassion, subsisting as they did on their relatives the snakes. was their protector. [Mahabharata, Book V: Udyoga Parva, Section 101.]

In , the IAST|garuḍas (: IAST|garuḷā) are enormous predatory birds with intelligence and social organization. Another name for the IAST|garuḍa is IAST|suparṇa (Pāli: IAST|supaṇṇa), meaning "well-winged, having good wings". Like the Nāgas, they combine the characteristics of animals and divine beings, and may be considered to be among the lowest devas.

The exact size of the IAST|garuḍa is uncertain, but its wings are said to have a span of many miles. This may be a poetic exaggeration, but it is also said that when a IAST|garuḍa's wings flap, they create hurricane-like winds that darken the sky and blow down houses. A human being is so small compared to a IAST|garuḍa that a man can hide in the plumage of one without being noticed (Kākātī Jātaka, J.327). They are also capable of tearing up entire trees from their roots and carrying them off.

The IAST|garuḍas have kings and cities, and at least some of them have the magical power of changing into human form when they wish to have dealings with people. On some occasions IAST|Garuḍa kings have had romances with human women in this form. Their dwellings are in groves of the "simbalī", or .

The IAST|garuḍas are enemies to the Nāgas, a race of intelligent serpent- or dragon-like beings, whom they hunt. The IAST|garuḍas at one time caught the nāgas by seizing them by their heads; but the nāgas learned that by swallowing large stones, they could make themselves too heavy to be carried by the IAST|garuḍas, wearing them out and killing them from exhaustion. This secret was divulged to one of the IAST|garuḍas by the ascetic Karambiya, who taught him how to seize a nāga by the tail and force him to vomit up his stone (Pandara Jātaka, J.518).

The IAST|garuḍas were among the beings appointed by to guard Mount and the IAST|Trāyastriṃśa heaven from the attacks of the asuras.

In the , the Buddha is shown making temporary peace between the Nagas and the IAST|garuḍas.

The Sanskrit word IAST|garuḍa has been borrowed and modified in the languages of several Buddhist countries. In Thai the word for a IAST|garuḍa is Krut (ครุฑ). In Burmese, IAST|garuḍas are called "ga-lon". In Japanese a IAST|garuḍa is called (however, the form "Garuda" ガルーダ is used in recent Japanese fiction - see below).

For the , the IAST|garuḍa is called Khan Garuda or "Khangarid" ( _mn. Хангарьд). Before and after each round of , groups performs the IAST|Garuḍa Dance, a stylised imitation of the "Khangarid" and a .Fact|date=July 2008

In the fiction "The Story of Yue Fei", Garuda sits at the head of the Buddha. But when a celestial bat (an embodiment of the Aquarius constellation) farts during the Buddha’s expounding of the , Garuda kills her and is exiled from paradise. He is later reborn as General . The bat is reborn as Lady Wang, wife of the traitor Prime Minister Qin Hui, and is instrumental in formulating the "Eastern Window" plot that leads to Yue's political execution. [ Hsia, C.T. C. T. Hsia on Chinese Literature. Columbia University Press, 2004 (ISBN 0231129904), 154]

As a cultural and national symbol

* also uses the IAST|garuḍa as its national symbol. The Indonesian national is .

* The IAST|garuḍa, known as Khangarid, is the symbol of the capital city of , . [Michael Kohn. "Mongolia". , 2005. p. 52.] According to popular Mongolian belief, Khangarid is the mountain spirit of the range who became a follower of Buddhist faith. Today he is considered the guardian of that mountain range and a symbol of courage and honesty. The bird also gives its name to and Khangarid (Хангарьд), a football (soccer) team in the .

* The elite bodyguards of the medieval kings in , , were called Garudas, because they served the king in the way that Garuda served Vishnu.

* has a luxury Volvo bus called Garuda, that is used for intercity and interstate travel.

* The US Navy's Electronic Attack Squadron 134 is nicknamed the Garudas.

* Garuda is the main character's Squadron in

* Garuda is the name of an anti-Godzilla weapon featured in .

* Garuda in the Architecture of Cambodia
*
*
*

* [http://angkorblog.com/_wsn/page7.html Photos of Garuda] as represented in stone bas reliefs at the temples of Preah Khan and Angkor Wat in Cambodia.
* [http://veda.harekrsna.cz/encyclopedia/garuda-purana.htm Garuda Purana]
* [http://www.thailex.info/THAILEX/THAILEXENG/lexicon/Garoeda%20in%20gevecht%20met%20Naga.htm Gauruda, arch-enemy of the naga]