Crab spider
Not to be confused with spider crab.

Crab spider as a name in common use

Rationalisation for the name crab spider is generally subjective and anecdotal. It is commonly said to refer to a fancied resemblance to crabs, or to the way such spiders hold their two front pairs of legs, or their ability to scuttle sideways or backwards. Some spiders so called have bodies that are flattened and angular. At all events, the Thomisidae are the family most generally referred to as "crab spiders". However, some members of the Sparassidae are called giant crab spiders, Selenopidae are called wall crab spiders, and various members of the Sicariidae are sometimes called six-eyed crab spiders.[1] Some unrelated Orb-weaver spider species such as Gasteracantha cancriformis also are commonly called "crab spiders."

Such names are of little biological significance, and in this article the emphasis is on the Thomisidae.

None of the crab spiders mentioned build webs to trap prey, though all of them produce silk for drop lines and sundry reproductive purposes; some are wandering hunters and the most widely known are ambush predators. Some species sit on or beside flowers or fruit, where they grab visiting insects. Individuals of some species, such as Misumena vatia, are able to change color over a period of some days, to match the flower on which they are sitting. Some species frequent promising positions among leaves or bark, where they await prey, and some of them will sit in the open, where they are startlingly good mimics of bird droppings. However, note that these members of the family Thomisidae are not to be confused with the spiders that generally are called bird dropping spiders, not all of which are close relatives of crab spiders.

Other species of crab spiders with flattened bodies, either hunt in the crevices of tree trunks or under loose bark, or shelter under such crevices by day, and come out at night to hunt. Members of the genus Xysticus hunt in the leaf litter on the ground. In each case, crab spiders use their powerful front legs to grab and hold onto prey while paralyzing it with a venomous bite.

The spider family Aphantochilidae was incorporated into the Thomisidae in the late 1980s. Aphantochilus species mimic Cephalotes ants, on which they prey.

The spiders of Thomisidae are not known to be harmful to humans. However, spiders of an unrelated genus, Sicarius, which are sometimes referred to as "crab spiders", or "six-eyed crab spiders", are close cousins to the recluse spiders, and are highly venomous, though human bites are rare. 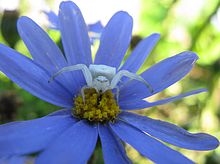 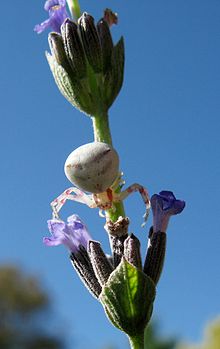 A typical female Crab Spider in the genus Thomisus 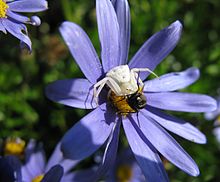 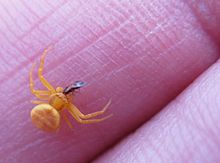 Thomisus sp. Male feeding on midge. The fingerprint gives some idea of the scale. 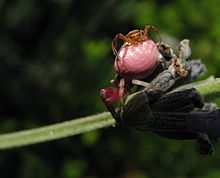 Thomisus sp female with male on back awaiting opportunity to mate, probably when she next feeds. Note the shape of the distal ends of his pedipalps. 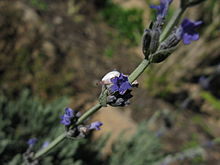 A crab spider in the genus Thomisus, sitting in ambush behind a Lavandula flower too small to accommodate her 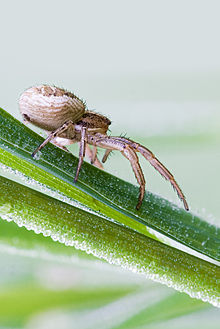 The following subfamilies are recognized: 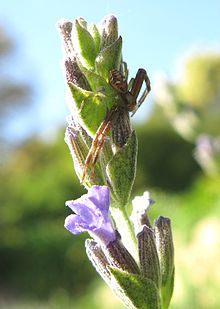