Trapdoor spiders (superfamily Ctenizoidea,[1] family Ctenizidae) are medium-sized mygalomorph spiders that construct burrows with a cork-like trapdoor made of soil, vegetation and silk. Some similar species are also called trapdoor spiders, such as the Liphistiidae, Barychelidae, Cyrtaucheniidae and some Idiopidae and Nemesiidae. Some Conothele species do not build a burrow, but construct a silken tube with trap-door in bark crevices.[2] 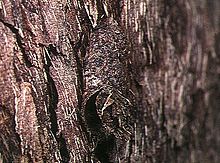 The trapdoor is difficult to see when it is closed because the plant and soil materials effectively camouflage it. The trapdoor is hinged on one side with silk. The spiders, which are usually nocturnal, typically wait for prey while holding on to the underside of the door with the claws on their tarsi. Prey is captured when insects, other arthropods, or small vertebrates disturb the 'trip' lines the spider lays out around its trapdoor, alerting the spider to a meal within reach. The spider detects the prey by vibrations and, when it comes close enough, leaps out of its burrow to make the capture.

A hungry individual will wait halfway outside of its burrow for a meal. Male trapdoor spiders can overcome the female's aggressive reactions to their approach, but it is not known how. Females never travel far from their burrows, especially if they have an egg sac. During this time, the female will capture food and regurgitate it to feed her spiderlings. Enemies of the trapdoor spider include certain pompilids (spider wasps), which seek out the burrows and manage to gain entrance. They sting the owner and lay their eggs (usually one per spider) on its body. When the egg hatches, the larva devours the spider alive.

Unlike other mygalomorph spiders, the Ctenizidae have a rastellum on the chelicera. Resembling "teeth" or "barbs" on each fang, this modification is used to dig and gather soil while constructing a burrow. They use their pedipalps and first legs to hold the trapdoor closed when disturbed.[3]

There are about 120 described species of trapdoor spiders.

The taxonomy of trapdoor spiders is currently not well understood in the United States and many species of the common genus Ummidia remain undescribed. Ummidia is distributed across the southern United States. Bothriocyrtum californicum is the common trapdoor spider of the Pacific Coast. The strange genus Cyclocosmia includes seven species, found in Florida, Eastern Alabama, Georgia, North Carolina, Mexico to Guatemala, China, Thailand and Canada. The discontinuous distribution is indicative of a basal genus that was affected by continental drift. The spiders of this genus are unusual in having a mask-like hardened plate on the opisthosoma, which seems to act as a second door to exclude predators, like the spider wasps. There is a narrow part of the burrow of these spiders where the abdominal shield just barely fits. Cyclocosmia torreya builds burrows in moss banks along the Apalachicola River in Florida. Other genera of trapdoor spiders are found in other areas of the world. They actually may be more common than we may think because of their cryptic habits. They do tend to be localized in distribution and as such may be subject to extinction because of local habitat destruction.

The categorization into subfamilies follows Raven (1985) 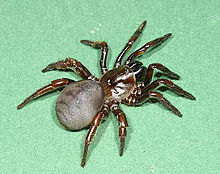 The Trapdoor Spider makes several appearances in the David Arquette film Eight Legged Freaks. They are one of the multiple species of spiders that have grown to incredibly large sizes because of ingestion of crickets plagued with toxic waste. Their most major appearance takes place when the other spiders attack a diner with many people inside, driving the customers (that aren't already getting eaten by the spiders in the diner) into the parking lot, where a large group of trapdoor spiders are hiding. As the escaping customers frantically run to their vehicles to escape the horde of arachnids, the trapdoor spiders spring into action, ambushing the customers then pulling their panicking victims back into their burrows to feast. Only one customer escapes, who drops a ladder onto the trapdoor of a waiting spider and walks on the ladder over the trapdoor, trapping the spider inside its burrow, effectively turning its own hunting technique against it.