The National Labor Relations Board (NLRB) is an independent agency of the United States government charged with conducting elections for labor union representation and with investigating and remedying unfair labor practices. Unfair labor practices may involve union-related situations or instances of protected concerted activity. The NLRB is governed by a five-person board and a General Counsel, all of whom are appointed by the President with the consent of the Senate. Board members are appointed to five-year terms and the General Counsel is appointed to a four-year term. The General Counsel acts as a prosecutor and the Board acts as an appellate judicial body from decisions of administrative law judges.

A predecessor organization, the National Labor Board, was established by the National Industrial Recovery Act in 1933, an act that was subsequently struck down by the Supreme Court.[2] 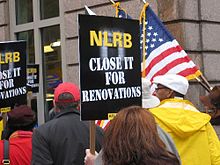 In 1947, the Taft–Hartley Act created a formal administrative distinction between the Board and the General Counsel of the NLRB. In broad terms, the General Counsel is responsible for investigating and prosecuting unfair labor practice claims; the Board, on the other hand, is the adjudicative body that decides the unfair labor practice cases brought to it. While the General Counsel has limited independence to argue for a change in the law in presenting cases to the Board, once the Board has decided the issue it is the General Counsel's responsibility to uphold the Board's decision, even if it is contrary to the position he advocated when presenting the case to the Board. The Board is also responsible for the administration of the Act's provisions governing the holding of elections and resolution of jurisdictional disputes.

The Board has more than thirty regional offices. The regional offices conduct elections, investigate unfair labor practice charges, and make the initial determination on those charges (whether to dismiss, settle, or issue complaints). The Board has jurisdiction to hold elections and prosecute violations of the Act in Puerto Rico and American Samoa.

The Board's jurisdiction is limited to private sector employers and the United States Postal Service; other than Postal Service employees, it has no authority over labor relations disputes involving governmental, railroad and airline employees covered by the Adamson Railway Labor Act, or agricultural employees. On the other hand, in those parts of the private sector its jurisdictional standards are low enough to reach almost all employers whose business has any appreciable impact on interstate commerce.

Charges are filed by parties against unions or employers with the appropriate regional office. The regional office will investigate the complaint. If a violation is believed to exist, the region will take the case before an Administrative Law Judge who will conduct a hearing. The decision of the Administrative Law Judge may be reviewed by the five member Board. Board decisions are reviewable by United States Courts of Appeals. The Board's decisions are not self-executing: it must seek court enforcement in order to force a recalcitrant party to comply with its orders. (For greater detail on this process see the entry for unfair labor practice).

From December 2007 until March 2009, the five-member Board had only two members, creating a legal controversy. Three members' terms expired in December 2007, leaving the NLRB with just two members—Chair Wilma B. Liebman and Member Peter Schaumber.[3] President George W. Bush refused to make some nominations to the Board and Senate Democrats refused to confirm those he did.[3][4][5] Just before the Board lost a quorum, the five Members agreed to delegate their authority to a three-person panel (as provided for by the National Labor Relations Act).[5][6] Only two of the members of the panel (Liebman and Schaumber) would remain on the Board, but the Board concluded that these two members constituted a quorum of the panel and thus could make decisions on behalf of the entire Board.[5][6] Liebman and Schaumber informally agreed to decide only those cases which were noncontroversial (in their view) and on which they could agree, and issued more than 400 decisions between January 2008 and September 2009.[3][4][5][7][8]

In April 2009, President Obama nominated Craig Becker (Associate General Counsel of the Service Employees International Union), Mark Gaston Pearce (a member on the Industrial Board of Appeals, an agency of the New York State Department of Labor), and Brian Hayes (Republican Labor Policy Director for the Senate Committee on Health, Education, Labor and Pensions) to fill the three empty seats on the NLRB.[3]

Becker's nomination appeared to fail on February 8, 2010, after Republican Senators (led by John McCain) threatened to filibuster his nomination.[5][10] President Obama said he would consider making recess appointments to the NLRB due to the Senate's failure to move on any of the three nominations.[10] On March 27, 2010 Obama recess appointed Becker and Pearce.[11] On June 22, 2010, a voice vote in the Senate confirmed Pearce to a full term, allowing him to serve until August 27, 2013. The same day, the Senate confirmed Republican nominee Brian Hayes of Massachusetts by voice vote. Hayes' term will end on December 16, 2012. Becker's term, as a recess appointee, will end on December 31, 2011.[12] Effective August 28, 2011, Pearce was named chairman to replace Democrat Wilma Liebman, whose term had expired.[13]

The General Counsel, appointed by the President to a 4-year term, is independent from the Board and is responsible for the investigation and prosecution of unfair labor practice cases and for the general supervision of the NLRB field offices in the processing of cases.