Nantwich Town Football Club is a semi-professional football club based in Nantwich, Cheshire, England. The club was founded in 1884 and is nicknamed The Dabbers. The club is currently a member of the Northern Premier League Premier Division, with home matches played at the Weaver Stadium.

Nantwich Town won the FA Vase Final on 6 May 2006. Two goals from Andy Kinsey and one from Stuart Scheuber produced a 3–1 win over Hillingdon Borough at St Andrews.

Nantwich followed up their FA Vase winning season of 2005–06 with another successful campaign in 2006–07 (their last at Jackson Avenue). Finishing 3rd in the North West Counties League Division One they were promoted to the Northern Premier League Division One South for the 2007–08 season and then gained a second consecutive promotion to the Northern Premier League Premier Division.

Founded in 1884, Nantwich has a long and proud football tradition. Early years were spent playing friendly and cup matches but in 1891 the club joined the Shropshire & District League, finishing as runners-up in the first season.

Nantwich moved into the stronger Combination the following season and on 15 October 1892 hosted Liverpool in the Merseysiders’ first ever FA Cup match (Liverpool won 4–0). Before World War 1, Nantwich also had spells in a variety of leagues including the North Staffs & District, the Crewe & District, Manchester and Lancashire Combination leagues.

In those early years, the club were honoured to have A.N.Hornby as President. Hornby captained England at rugby and cricket and, as well as being President, turned out for the club on a number of occasions.

After the war, the club became founder members of the Cheshire County League in which they were perennial strugglers, though they did finish 6th in 1921–22. The season before, a record home attendance of 5,121 watched the Dabbers play Winsford United in the Cheshire Senior Cup at their temporary home at Kingsley Fields. Ironically, this is the location where the club is now looking to build a new modern stadium and move to for the 2005–06 season.

Success, though, came in the Cheshire Senior Cup in 1933 when the Dabbers lifted the trophy after beating ICI (Alkali) at the Drill Field, Northwich in front of 8,000 fans. After the Second World War, the Dabbers joined the newly-founded Mid Cheshire League and in 1952, the club entered the inaugural FA Youth Cup competition. Drawn against Manchester United in the second round, the young Dabbers crashed 23–0 on a November evening at the Cliff training ground to a United youth line up including names such as Duncan Edwards, David Pegg, Albert Scanlon and Ron Cope (who, ironically, joined Nantwich in the twilight of his career).

However, the mid-1960s saw considerable success and in the 1963–64 season the club completed a treble, winning the Mid Cheshire League, League Cup and Cheshire Amateur Cup under Manager Alan Ball (senior).

According to former player the late Mike Brookes: “Mr Ball trained us very hard and taught us techniques that were new to us – or were rusty. He made us think ‘the game’ more. “One ploy was when we were attacking – for me as centre forward to mark the centre half out of the game. The other forwards could still use me for the one–two wall pass to break through. I could still spin off the centre forward to join the attack. I did get a few bruises this way ! “At a corner – the other forwards would move away from the penalty spot, thus taking markers with them. I would be way out on the edge of the penalty box – running in at speed when the corner was taken – hoping the kick (as planned) ended up at head height on the penalty spot. “Mr Ball used the fear factor to keep us ‘on the ball’. He would bring along ‘reputation’ players to training or ‘sign them on’ and have them turn up for matches; so we thought we could be dropped and sometimes we were.”

Nantwich rejoined the Cheshire League in 1968 and in 1976 the Dabbers beat NPL champions Runcorn 5–4 in the Cheshire Senior Cup Final at Gresty Road in front of 2237. Five years later in May 1981 a crowd of 1078 saw Nantwich clinch the Cheshire League by beating eventual runners up Hyde United in the penultimate game of the season 2–1.

1982 saw Nantwich become founder members of the North West Counties League. Unfortunately Nantwich had the unenviable honour of finishing bottom and were relegated to Division 2 where the club remained (except for one season in Division 3 in 1986) until 1989 when the Dabbers were promoted to Division One. Since then, Town have maintained consistent mid-table form. The one exception was in 1993–94 season when they finished in their highest ever NWCFL placing of fourth. However the honours were to come on the cup front in 1994–95 when Nantwich defeated Trafford 1–0 in the League Cup Final on a memorable April evening at Gigg Lane Bury. This success atoned for the disappointment in 1993 when at the same venue Nantwich lost 2–1 to Burscough in another tight final. Ex-Stoke City player Nigel Gleghorn was appointed Manager in November 2001 and he helped steer Nantwich to a top six finish in 2003, when the club also attained the prestigious FA Charter Standard Community Club award. 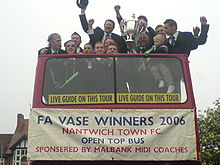 The open-top bus on arrival at Nantwich Civic Hall in Market Street. The FA Vase is raised aloft.

Gleghorn left the club in the 2004 close season and former Crewe, Burnley and Barnsley defender Steve Davis was appointed as Head Coach. Davis, ably assisted by former Nantwich and Macclesfield striker Peter Hall, proved to be the most successful manager in the club's history. His 5 years in charge saw 2 promotions and both FA Vase and County cup glory.

Davis led Nantwich to FA Vase glory in 2005–06 when the Dabbers beat Hillingdon Borough 3–1 in the Final at Birmingham City’s St Andrews stadium. En route to the final, Nantwich kept a clean sheet in 8 out of 9 ties including impressive victories over Buxton (1–0) and Cammell Laird (5–0 in the two-legged semi-final). Andy Kinsey hit two goals in the final, but dislocated his shoulder celebrating the second. Following the victory, the club paraded the Vase in an open-top bus. In the league, Nantwich equalled their highest ever finish (4th) but narrowly missed out on promotion.

In 2006–07 they finished third and secured promotion to the Northern Premier League. They amassed 95 points and 108 goals from 42 games. During the season Nantwich recorded their highest post-war league attendance (1,536) against FC United. To sign off the home campaign, a crowd of 1,071 saw the last game at 123 year old Jackson Avenue ground when Nantwich beat Squires Gate 5–2 on 28 April 2007.

In the 2007–08 season Nantwich Town finished third in the Northern Premier League Division One South. This qualified them for the play-offs in which they came from behind to beat Grantham Town 2–1 and then beat Sheffield 4–1 on penalties after a 2–2 draw in front of a season's best crowd of 1,354. This double promotion meant Nantwich played the 2008–09 season in the Northern Premier League Premier Division. They also won the Cheshire Senior Cup beating higher ranked teams Hyde United and Northwich Victoria en-route to a win in the final on penalties over Conference side Altrincham after a thrilling 3–3 draw.

In 2008–09 Nantwich finished third in the table but lost to Ilkeston Town in the play off final. Nantwich also had a good run in the FA Cup beating FC United 4–3 in a replay, Halifax Town 4–1 and Whitley Bay 5–1 before losing to Fleetwood Town 4–3 in the 4th Qualifying round. Stand out results in the league were 5–0 home and away defeats of Boston United, a 3–0 home win over FC United.

In the 2009 close season Steve Davis left for the assistant managers job at Crewe to be replaced by his long time assistant Peter Hall.

The pre-season was mixed, with the highlight being a 2–0 win over a Stoke City side featuring several first team players. The club also celebrated its 125th anniversary with a new badge and the release of a book chronicling the history of the club, entitled 'Proud To Be The Dabbers'.[1]

The season has seen disappointing results for the Dabbers, with the team languishing towards the bottom of the table with plenty of goals conceded. The defence has been a weakness with large defeats to FC United (1–6 at home, 0–4 away) and Boston (0–4 at home, 0–5 away) being particular low points. The cups saw a 1–0 defeat to lower division Warrington Town in the FA Cup, a 3–0 home defeat to Stalybridge Celtic in the FA Trophy, and the Dabbers were defeated 4–3 by Cammell Laird in the Cheshire Senior Cup. The poor form resulted in Head Coach Peter Hall losing his job in late March. After Halls departure, Kevin Street and Darren Tinson took over on a caretaker basis, there was an immediate improvement in results, with their 6 games in charge having 5 wins and 1 draw. The Dabbers finished in 10th position.

The season has been blighted with a number of late postponements, with home games against Bradford PA and Worksop & away games against Durham City and Kendal all being postponed within an hour of kick off.

Crowds are also down, with most home games attracting around 300 fans, well down from the 500–600 crowds of the previous two seasons.

The season did not begin in a good way, with several heavy pre-season defeats followed by losses in the first 3 league games, after a win over Northwich Victoria, several other defeats followed including a FA Cup defeat to lower league Whitley Bay. This left Nantwich at 21st in the table. On the 13th October Nantwich were involved in a classic game with Mickleover Sports, when they came back from a 6–2 deficit to draw 6–6. This comeback seems to have sparked a revival in the fortunes of the Dabbers, with only one defeat in the next 10 games and the managerial duo of Street and Tinson received the Manager of the Month award for November.

On 7 February 2011 Clive Jackson stepped down from his role as Chairman to become the vice-chairman due to work commitments in Dubai. Jon Gold (the clubs commercial and marketing director) stepped up and took over the role of chairman.

On 10 March 2011 it was announced that joint managers Kevin Street and Darren Tinson were leaving by mutual consent with director of football Jimmy Quinn taking temporary charge of first team affairs. The announcement came after Nantwich recorded a run of 0 points from their last 6 games. 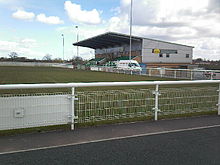 The club plays at the Weaver Stadium at Kingsley Fields. The ground cost £4 million, and was opened in 2007 before the start of the 2007–08 season; previously the club had played at Jackson Avenue.

Although bad weather set back the opening of the ground, with Nantwich having to play the majority of their pre-season games away from home, the first match at the Weaver Stadium took place on the 7 August 2007 with League One side Port Vale the visitors for a friendly that ended 6–3 to the League side. Port Vale's Ross Davidson scored the first goal at the ground after just 3 minutes with Glyn Blackhurst becoming the first Nantwich Town player to find the net. The ground was officially opened before Nantwich's match on October 10, 2007 by Sir Trevor Brooking[2] Moving to the new stadium coupled with success on the pitch has helped contribute to a dramatic increase in Nantwichs attendances from an average of 118 in 2005–06 to an average of 664 in 2008–09

The Baker Wynne & Wilson Stand is the main stand at the Weaver stadium and is situated to the south of the pitch. It seats around 300 people. It also contains bar facilities and also a snack bar.

The Dovey's stand is a low terrace situated to the north of the pitch at the Weaver Stadium. It can hold around 295 standing supporters. It is home to the more vocal of the Dabbers support

At present both ends of the ground are flat and undeveloped.