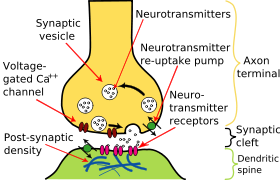 Nerve impulses are essential for the propagation of signals. These signals are sent to and from the central nervous system via efferent and afferent neurons in order to coordinate smooth, skeletal and cardiac muscles, bodily secretions and organ functions critical for the long-term survival of multicellular vertebrate organisms such as mammals.

Neurons form networks through which nerve impulses travel. Each neuron receives as many as 15,000 connections from other neurons. Neurons do not touch each other; they have contact points called synapses. A neuron transports its information by way of a nerve impulse. When a nerve impulse arrives at the synapse, it releases neurotransmitters, which influence another cell, either in an inhibitory way or in an excitatory way. The next neuron may be connected to many more neurons, and if the total of excitatory influences is more than the inhibitory influences, it will also "fire", that is, it will create a new action potential at its axon hillock, in this way passing on the information to yet another next neuron, or resulting in an experience or an action.

Stages in neurotransmission at the synapse

Each neuron is connected with numerous other neurons, receiving numerous impulses from them. Summation is the adding together of these impulses at the axon hillock. If the neuron only gets excitatory impulses, it will also generate an action potential; but if the neuron gets as many inhibitory as excitatory impulses, the inhibition cancels out the excitation and the nerve impulse will stop there. Summation takes place at the axon hillock.[2]

Spatial summation means several firings on different places of the neuron, that in themselves are not strong enough to cause a neuron to fire. However, if they fire simultaneously, their combined effects will cause an action potential.

Temporal summation means several firings at the same place, that won't cause an action potential if they have a pause in between, but when there are several firings in rapid succession, they will cause the neuron to reach the threshold for excitation.[3]

In modern neuroscience, neurons are often classified by their cotransmitter, for example striatal GABAergic neurons utilize opioid peptides or substance P as their primary cotransmitter.

Some neurons can release at least two neurotransmitters at the same time, the other being a cotransmitter, in order to provide the stabilizing negative feedback required for meaningful encoding, in the absence of inhibitory interneurons.[5] Examples include: