The song was written by guitarist and songwriter . "Love, Reign o'er Me", along with "Is It in My Head?" from "Quadrophenia", date back to 1972.

The song concerns the main character of "Quadrophenia", Jimmy, having a personal crisis and stealing a boat to go off to a small island. With nothing left to live for, he finds a spiritual redemption in pouring rain. As Townshend described the song:

[It] refers to 's one time comment that rain was a blessing from ; that thunder was God's Voice. It's another plea to drown, only this time in the rain. Jimmy goes through a suicide crisis. He surrenders to the inevitable, and you know, you know, when it's over and he goes back to town he'll be going through the same shit, being in the same terrible family situation and so on, but he's moved up a level. He's weak still, but there's a strength in that weakness. He's in danger of maturing. [ [http://www.thewho.net/ thewho.net] ]

The single release is shorter than the album track, missing the introductory rolling surf sound and the first piano intro and tympani and gong crash, slightly different sequence of the lyrics and ends on string synthesizers with piano rather than the drum solo, guitar, gong and brass explosion as on the album. The single was released with a B-side titled "Water". The song peaked at number 76 on the "Billboard" Hot 100. Outside of the United States, the single was released in and the .

Frontman 's vocal on the track has been widely praised; Mark Deming of noted "Quadrophenia" captured him at the very peak of his powers, and "Love, Reign o'er Me" is one moment where his golden-haired rock-god persona truly works and gives this song all the force it truly deserves." [Deming, Mark. [http://allmusic.com/cg/amg.dll?p=amg&sql=33:fcfixcy0ldte "Love, Reign o'er Me: Song Review"] . .]

The song served as inspiration for the title of the 2007 film "" and was also featured extensively throughout the film.

Live performances of "Love, Reign o'er Me" can be found on the live albums "" and "Join Together". It was one of four songs performed at the band's one-off performance at 's concert at on July 13, 1985. When The Who performed "Quadrophenia" in its entirety in the summer of 1996, the band was joined by 's on the song. 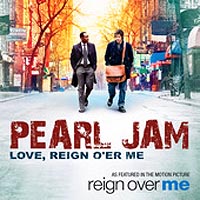 The song made a world premiere on the KISW-FM radio station on January 8, 2007. The track appears on Pearl Jam's 2006 Christmas Fan Club single along with a cover of "" featuring and from . The cover was also made available as a single download from on February 23, 2007. Pearl Jam's version of the song peaked at number 32 on the "Billboard" Mainstream Rock Tracks chart.