In 1936 the Red Army adopted the 122 mm gun M1931, also known as A-19. Unlike earlier ordnance pieces used by the Red Army, it had split trail carriage with suspension, and consequently improved mobility and traverse. The carriage of M1931 had a number of shortcomings though. The elevation mechanism was slow and unreliable; solid-tired wheels hindered mobility to some extent; there were technological problems in carriage production.[1] 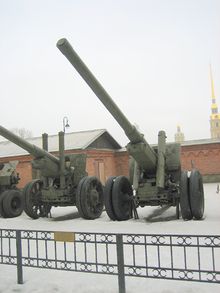 The M1931/37 (right) stands beside what appears to be its predecessor, the M1931, in the Artillery Museum in Saint Petersburg.

Like barrel of late production M1931, the barrel of the M1931/37 was of loose liner construction, and consisted of liner, jacket and screwed-upon breech. The breechblock was of interrupted screw type, similar in construction to that of the 152 mm howitzer M1910/37. Recoil system consisted of hydraulic recoil buffer and hydropneumatic recuperator, both located inside the cradle under the barrel.

The gun had split trail carriage adapted from the 152 mm howitzer-gun M1937 (ML-20). The carriage was fitted with leaf spring suspension and metal wheels with pneumatic tires. The carriage also featured equlibrator. The shield gave the crew some protection from small arms and shell fragments.

The M1931/37 was transported as a single piece, with barrel pulled back. It was permitted to tow the gun with barrel in its normal position, but for short distances only and with speed of no more than 4–5 km/h. Several types of artillery tractors were used: S-2 Stalinets-2, Komintern and, from 1943, Ya-12.

Both variants - M1931 and M1931/37 - had the same place in army organizations, were often used alongside each other and combat reports rarely differentiate between them; consequently, the data in this section is for M1931 and M1931/37 together, unless specified otherwise. 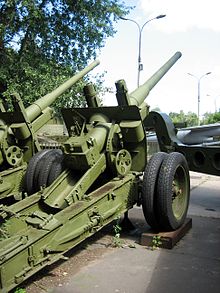 The A-19 was originally intended for corps artillery. Together with ML-20 it formed a so-called "corps duplex". In 1940-41 there were three types of corps artillery regiments:

The A-19 was primarily used for indirect fire against enemy personnel, fortifications and key objects in the near rear. It was also equipped with armour-piercing shells for direct fire against armoured targets. Although not an ideal anti-tank gun because of its large size, slow traverse and relatively slow rate of fire, in 1943 the A-19 was one of only a few Soviet guns effective against the new German tanks, such as the Tiger and Elefant.

It is said that an A-19 was the first gun to fire at the start of the Battle of Berlin.[7] 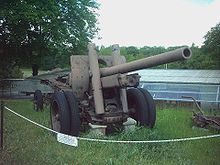 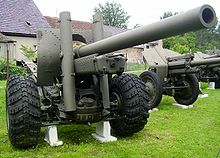 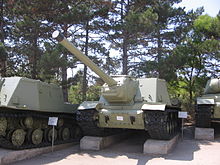 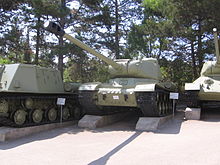 The gun fired separate loading, cased charge ammunition, with one of four possible propellant charges - the full, no. 1, no. 2 and no. 3 (the smallest). In addition to 122 mm gun shells, the A-19 could fire 122 mm howitzer shells; however because of lesser durability of those shells they could not be used with full charge. 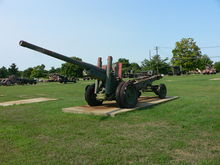