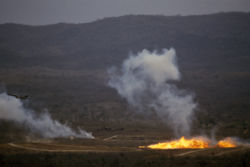 Napalm is a thickening/gelling agent generally mixed with gasoline or a similar fuel for use in an incendiary device, primarily as an anti-personnel weapon. The portmanteau Napalm was derived from the names of two of the constituents of the gel: naphthenic acid and palmitic acid.

"Napalm B" is the more modern version of napalm and, although distinctly different in its chemical composition, it is often referred to simply as "napalm".[1]

Colloquially, napalm has been used as the generic name of several flammable liquids used in warfare, often forms of jellied gasoline, such as to be expelled by flamethrowers in infantry and armored warfare.[1]

Napalm B is chemically distinct from its predecessor Napalm. It is usually a mixture of polystyrene and benzene. This is used as a thickening agent to make jellied gasoline. One of the advantages of this new mixture lies in its increased safety while being handled and stored. Many accidents had been attributed to personnel smoking around stockpiles.[2]

Napalm 2 has a commonly quoted composition of 21% benzene, 33% gasoline (itself containing between 1% and 4% (estimated) benzene to raise its octane number), and 46% polystyrene. This mixture is difficult to ignite[citation needed]. A reliable pyrotechnic initiator, often based on thermite (for ordinary napalm) or white phosphorus (for newer compositions), has been used.[3][4] The original napalm usually burned for 15 to 30 seconds while napalm-B can burn for up to 10 minutes.[4]

Napalm 877 has been used in flamethrowers and bombs by American and Allied forces[when?] to increase their effectiveness. It is believed by some that Napalm B is formulated to burn at a specified rate and to adhere to surfaces to increase its stopping power. During combustion, Napalm rapidly deoxygenates the available air and generates large amounts of deadly carbon monoxide and carbon dioxide. Napalm bombs were notably used during the Vietnam War.[1]

Napalm was also used during the Korean War, such as during the defense of "Outpost Harry" in South Korea during the night of June 10 – 11, 1953.

Use of fire in warfare has a long history; similar to napalm is the earlier Greek fire, which was also described as "sticky fire" (πῦρ κολλητικόν) and is believed to have had a petroleum base. Thickened burning compositions proved their advantages. The development of napalm was precipitated by the use of jellied gasoline mixtures by the Allied forces during World War II.[1] The latex that had been used in these early forms of incendiary devices became logistically impossible to use during the Pacific Theater of Operations, since natural rubber was next to impossible to obtain. (The Japanese Army had overrun all of the rubber plantations in Malaya, Indonesia, Vietnam, and Thailand.)

This extreme shortage of natural rubber prompted the chemists at American companies such as Du Pont and Standard Oil, as well as researchers at Harvard University, to strive to develop factory-made alternatives - artificial rubber for all uses, including for vehicle tires, tank tracks, gaskets, hoses, medical supplies and rain clothing. A team of chemists led by Louis Fieser at Harvard University was the first one to develop synthetic napalm, during 1942 for the U.S. Armed Forces.[5]

From 1965 to 1969, the Dow Chemical Company manufactured napalm B for the American armed forces. After news reports of napalm B's deadly and disfiguring effects were published, Dow Chemical experienced some boycotts of all its products, and its recruiters for new chemists, chemical engineers, etc., graduating from college were subject to campus boycotts. The management of the Dow Chemical Company decided that "its first obligation was the government." Meanwhile, napalm B became a symbol for the Vietnam War.[6] 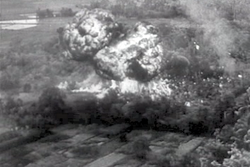 Napalm was first used as fuel for flamethrowers and went on to be used more prevalently in firebombs.[1]

In 1942, researchers at Harvard University found that a jelly gasoline-like substance burnt more slowly and thus was far more effective. They found that mixing an aluminum soap powder of naphthalene and palmitate (hence na-palm), also known as napthenic and palmitic acids, with gasoline produced a brownish sticky syrup that burned more slowly than raw gasoline. This new mixture of chemicals was widely used in the Second World War in flame throwers and fire bombs. Napalm bombs burned out 40% of the area of Japanese target cities in the World War.[citation needed] Useful weapons continued to be improved, and napalm was no exception. With many more chemical compounds available after World War II, the safer (in storage) and just-as-effective napalm B compound was developed.[2]

On July 17, 1944, napalm incendiary bombs were dropped for the first time by 14 American P-38 Lightning aircraft of the 402d Fighter Squadron / 370th Fighter Group on a fuel depot at Coutances, near St. Lô, France.[7] Further use of napalm by American forces occurred in the Pacific Theater of Operations, where in 1944 - 45, napalm was used as a tactical weapon against Japanese bunkers, pillboxes, tunnels, and other fortifications, especially on Saipan, Iwo Jima, the Philippines, and Okinawa, where deeply dug-in Japanese troops refused to surrender. Napalm bombs were dropped by aviators of the U.S. Navy, the United States Army Air Forces, and the U.S. Marine Corps in support of their ground troops.[8]

Then, when the U.S. Army Air Forces on the Marianas Islands ran out of conventional thermite incendiary bombs for its B-29 Superfortresses to drop on Japanese cities, its top commanders, such as General Curtis E. LeMay turned to napalm bombs to continue its fire raids on the large Japanese cities.[9]

In the European Theater of Operations napalm was used by American forces[10] in the siege of La Rochelle in April 1945 against German soldiers (and inadvertently[citation needed] French civilians in Royan) - about two weeks before the end of the war.[11]

Napalm B was also used during the Greek Civil War between the Greek Army and Communist rebels. During the last year of this Civil War, 1949, the United States increased its military aid to the Greek Government by introducing a new weapon to finish off the war - napalm B. The first napalm attack in Greece took place on the mountain of Grammos, which was the stronghold of the Communist rebels.

Napalm B was also widely used by the United Nations military forces during the Korean War.[1] These Allied ground forces in Korea were frequently outnumbered, and greatly, by their Chinese and North Korean attackers, but the U.S. Air Force and the U.S. Navy naval aviators had control of the air over nearly all of the Korean Peninsula. Hence, close air support of the ground troops along the border between North Korea and South Korea was vital, and the American and other U.N. aviators turned to napalm B as an important weapon for defending against communist ground attacks. 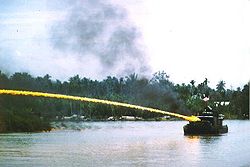 Riverboat of the U.S. Brown-water navy deploying an ignited napalm mixture from a riverboat mounted flamethrower in Vietnam.

The US Air Force and US Navy used napalm with great effect against all kinds of targets to include troops, tanks, buildings and even railroad tunnels. The effect was not always purely physical as napalm had tangible psychological effects on the enemy as well. During World War II, the U.S. Marines quickly learned that the Japanese soldiers, when threatened with napalm and other incendiary weapons, would abandon positions in which they would fight to the death against other weapons. During the Korean War, the demoralizing effect napalm had on the enemy became apparent when scores of North Korean and Chinese troops began to surrender to aircraft flying overhead. Pilots noted that they saw surviving enemy troops waving white flags on subsequent passes after dropping napalm. The pilots radioed to ground troops and the enemy combatants were captured. Interviews with enemy prisoners of war determined that napalm was the most feared weapon used against them.[12]

A US army source, talking about napalm, reported[16]

‘We sure are pleased with those backroom boys at Dow. The original product wasn’t so hot - if the gooks were quick they could scrape it off. So the boys started adding polystyrene - now it sticks like shit to a blanket. But if the gooks jumped under water it stopped burning, so they started adding Willie Peter (white phosphorus) so’s to make it burn better. And just one drop is enough, it’ll keep on burning right down to the bone so they die anyway from phosphorus poisoning.’

Phan Thi Kim Phuc after being burned in a napalm attack.

When used as a part of an incendiary weapon, napalm can cause severe burns (ranging from superficial to subdermal) to the skin and body, asphyxiation, unconsciousness, and death. In this implementation, explosions can create an atmosphere of greater than 20% carbon monoxide[1] and firestorms with self-perpetuating windstorms of up to 70 miles per hour (110 km/h).[17][unreliable source?]

One of the main anti-personnel features of napalm is that it sticks to human skin, with no practical method for removal of the burning substance.[citation needed]

Napalm is effective against dug-in enemy personnel. The burning incendiary composition flows into foxholes, trenches and bunkers, and drainage and irrigation ditches and other improvised troop shelters. Even people in undamaged shelters can be killed by hyperthermia/heat stroke, radiant heat, dehydration, suffocation, smoke exposure, or carbon monoxide poisoning. The firebombing raids on German cities, e.g. Dresden and Hamburg, frequently caused death by this mechanism.[4]

One firebomb released from a low-flying plane can damage an area of 2,500 square yards (2,100 m2).[citation needed]

International law does not prohibit the use of napalm or other incendiaries against military targets,[15] but use against civilian populations was banned by the United Nations Convention on Certain Conventional Weapons (CCW) in 1980.[18] Protocol III of the CCW restricts the use of all incendiary weapons, but a number of states have not acceded to all of the protocols of the CCW. According to the Stockholm International Peace Research Institute (SIPRI), states are considered a party to the convention, which entered into force as international law in December 1983, if they ratify at least two of the five protocols. The United States, for example, is a party to the CCW but did not sign protocol III.[19]