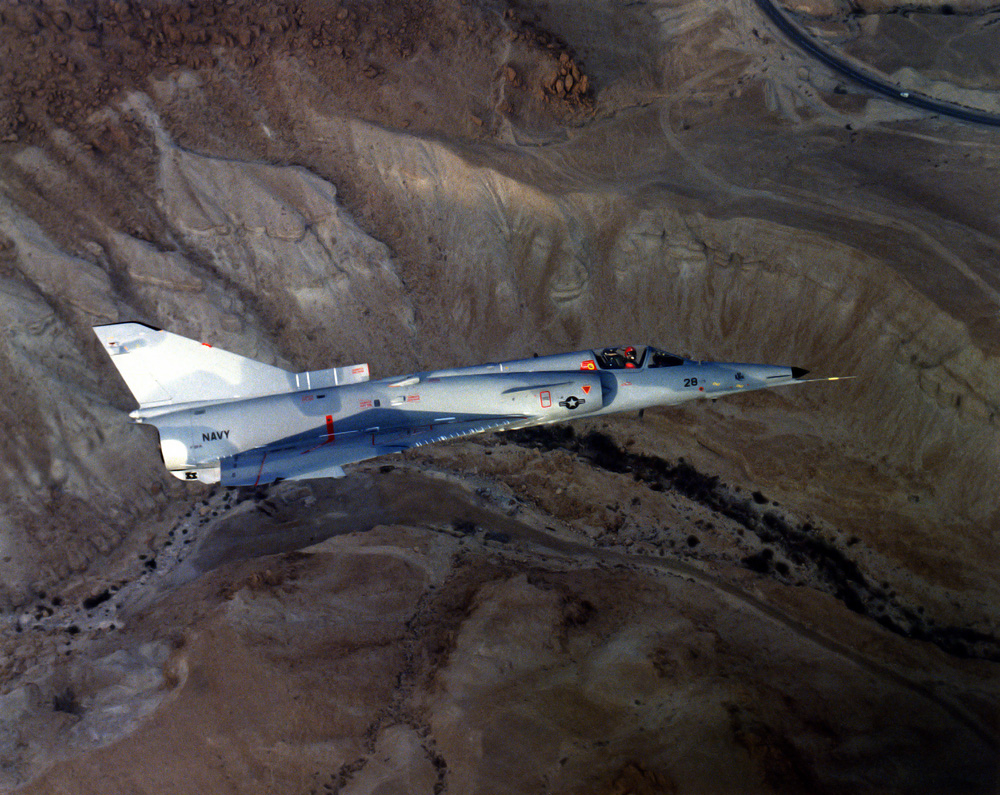 The Israel Aircraft Industries Kfir ( _he. כפיר, "Lion Cub") is an i-built all-weather, multi-role combat aircraft based on a modified airframe, with Israeli and an Israeli-made version of the turbojet engine.

The project that would ultimately give birth to the Kfir can be traced back to Israel's need for adapting the Dassault Mirage IIIC to the specific requirements of the (IAF).

The all-weather, delta-winged Mirage IIICJ was the first aircraft acquired by Israel, and constituted the backbone of the IAF during most of the 1960s, until the arrival of the and, most importantly, the , by the end of the decade. While the Mirage IIICJ proved to be extremely effective in the air-superiority role, its relatively short range of action imposed some limitations on its usefulness as a .

Thus, in the mid-1960s, at the request of Israel, began developing the Mirage 5, a fair-weather, ground-attack version of the Mirage III. Following the suggestions made by the Israelis, advanced avionics located behind the cockpit were removed, allowing the aircraft to increase its fuel-carrying capacity while reducing maintenance costs.

By 1968, Dassault had finished production of the 50 Mirage 5Js paid for by Israel, but an arms embargo imposed upon the country by the French government in 1967 prevented Dassault from ever delivering the aircraft. The Israelis replied by producing an unlicensed copy of the Mirage 5, the Nesher, with technical specifications for both the airframe and the engine obtained by Israeli intelligence. [According to a number of sources, the Israelis had some covert collaboration from Dassault Aviation itself, going so far as to allow for two disassembled Mirage 5s to be smuggled into Israel in crates ("see the article for details").]

The development of this aircraft has been attributed to covert action on the part of . Mossad was able to acquire the plans for the Mirage III, which were used directly in the design process of the Kfir aircraft series. [ [http://www.cloakeddagger.com/page/?Mossad_Ops Cloaked Dagger ] ] The designers at IAI then began work on the project to improve upon the Mirage III, deciding first to find a replacement engine.

Two powerplants were initially selected for trials—the and the . In the end, the J79 was selected, not the least because it was the same engine used on the McDonnell Douglas , which the Israelis began to acquire from the in , along with a license to produce the J79 themselves. The J79 was clearly superior to the Atar 09, providing a dry thrust of 49 kN (11,000 lbf) and an afterburning thrust of 83.4 kN (18,750 lbf).

In order to accommodate the new powerplant on the Mirage III's airframe, and to deliver the added cooling required by the J79, the aircraft's rear fuselage was slightly shortened and widened, its air intakes were enlarged, and a large air inlet was installed at the base of the vertical stabilizer, so as to supply the extra cooling needed for the afterburner. The engine itself was encased in a titanium heatshield.

An improved prototype of the aircraft, with the name "Ra'am" ("Thunder"), made its first flight in June 1973. It had an extensively revised cockpit, a strengthened landing gear, and a considerable amount of Israeli-built avionics. The internal fuel tanks were slightly rearranged, their total capacity being increased to 713 gallons.

There were unconfirmed reports that a number of the original Mirage IIICs, re-engined with the J79 and given the name "Barak" ("Lightning"), took part in the of , but some sources point out that there is no real evidence that these aircraft ever existed. [ [http://www.aeroflight.co.uk/waf/israel/iafnouse.htm "Aeroflight. World Air Forces"] . Retrieved Mar 25, 2006.]

The Kfir entered service with the IAF in 1975, the first units being assigned to the renowned 1st Fighter Squadron. Over the following years, several other squadrons were also equipped with the new aircraft. The role of the Kfir as the IAF's primary air superiority asset was short-lived, as the first fighters from the were delivered to Israel in 1976. The Kfir's first recorded combat action took place on , , during an Israeli air strike on a terrorist training camp at Tel Azia, in . The only air victory that the Kfir achieved during its service in the IAF occurred on , when an Israeli Kfir C.2 shot down a Syrian MiG-21.

By the time of the Israeli invasion of southern Lebanon in 1982 ("Operation Peace for Galilee") the IAF was able to use both its F-15s and F-16s for air superiority roles, leaving the Kfirs for carrying out unescorted strike missions. Soon after all the IAF's C.2s began to be upgraded to the C.7 version, which enhanced the performance of the aircraft as a fighter-bomber, the Kfirs' new role in the IAF's order of battle.

During the second half of the 1990s, the Kfirs were withdrawn from active duty in the IAF, after almost twenty years of continuous service.

The Kfir in foreign service

Since the J79 turbojet engine as well as much of the technology inside the Kfir are produced in Israel under U.S. license, all export sales of the Kfir are subject to prior approval from the U.S. State Department, a fact that has limited the sale of the Kfir to foreign nations.

Twenty-five modified Kfir-C1s were leased to the and the from to , to act as adversary aircraft in dissimilar air combat training (). These aircraft, designated F-21A Kfir, had narrow-span canard foreplanes and a single small rectangular strake on either side of the nose which considerably improved the aircraft's manoeuvrability, and handling at low speeds.

The 12 F-21 aircraft leased to the US Navy, painted in a three-tone blue-gray "ghost" scheme, were operated by VF-43, based at NAS Oceana. In 1988 they were returned and replaced by the F-16N. The 13 aircraft leased to the were operated by at . In addition to the blue-gray painted aircraft, the USMC also had some F-21s painted in Israeli colors and desert "flogger" schemes. These aircraft were replaced by F-5Es when the F-21s were returned in 1989.

Kfirs are also used by ATAC, a civilian company that provides fleet tactical aircraft and services to the US military. ATAC provides airborne tactical training, threat simulation, and research & development. They are based in Newport News, VA and also operate the SAAB Draken.

As a result of a trade agreement between and Israel in the Colombian government bought a batch of twelve ex-IAF Kfir C.2s and one TC.2, which were delivered to the ("FAC") in -. Since then, all the C.2s have been upgraded to the C.7 variant.The "FAC" Kfirs have been widely used in ground-attack missions during counter-insurgency operations against Colombian guerrillas. Colombian Kfirs are armed with Python 3 IR-homing AAMs.As of 2004 two aircraft had been lost in accidents.

In February Colombia signed a deal with the Israeli government for more 24 ex-IAF Kfir aircraft. These aircraft will most probably be upgraded by to C.10 standard. ["http://www.jpost.com/servlet/Satellite?cid=1202246330416&pagename=JPost%2FJPArticle%2FShowFullrgb "Colombia to buy Israeli combat jets"] ["http://www.youtube.com/watch?v=VBGQNqTc9" "Colombia Purchases 24 Kfir Bomber Jets From Israel"]

In , and Israel signed a sales agreement for ten refurbished ex-IAF Kfir C.2s and two TC.2s, which were delivered to the ("FAE") in -. The Kfirs formed the 2113rd Squadron ("Lions") of the FAE's 21st Fighter Wing, based at Taura AFB, on the Ecuadorian western lowlands.

The "FAE" Kfirs went into action during the between Ecuador and . Relying on its fleet of subsonic A-37Bs for low-level ground-attack missions on Peruvian positions, the Ecuadorian Air Force held back its Mirage F.1s and Kfir C.2s for use as escorts and interceptors. On , a Kfir C.2 shot down a Cessna A-37B with a Shafrir 2 IR-homing AAM.

In , with tensions still running high between Ecuador and Peru, the Ecuadorians acquired four additional Kfirs (three C.2 and one TC.2) after securing approval from the U.S. State Department.

In 1998, with its aging squadron of fighter-bombers about to be withdrawn from active duty, Ecuador began talks with Israel for the sale of a new batch of eight Kfirs. Fearing an escalation of the arms race in South America - Peru had recently acquired 18 MiG-29s and 18 Su-25s from - the United States blocked the deal.Fact|date=February 2008 As an alternative, Ecuador and Israel signed an agreement in 1999 for the delivery of two Kfir C.10s and for the conversion of an undisclosed number of the "FAE's" original C.2s to the C.10 version, referred to in Ecuador as Kfir CE, featuring a Helmet Mounted Display System, and armed with Python 3 and Python 4 IR-homing AAMs.

By 2005, Ecuador had lost four Kfirs, including one TC.2, due to accidents since the aircraft entered service in 1982.

* Kfir-C1 : Basic production variant.
** F-21A Kfir : 25 upgraded Kfir-C1 aircraft were leased to the USN and USMC for an aggressor role and were designated F-21A. These aircraft had been modified and included canards on the air intakes. These canards greatly improved the aircraft maneuverability and slow speed control, and were adopted on later variants.
* Kfir-C2 : An improved C1 that featured a lot of aerodynamic improvements. Changes included "dogtoothed" leading edges on the wings, small strakes under the nose and a larger sweep angle of the canards.
* Kfir-TC2 : A two-seat training variant developed from the C2. It has a longer and lowered nose to improve the pilot's view.
* Kfir-C7 : Vastly modified variant. The very most if not all C2 aircraft were modified to this variant. It included an improved J79-GEJ1E engine that offered more 1,000 lbs of thrust at full afterburner (and as a result increasing the Maximum Take-off Weight by 3,395 lbs), 2 more hardpoints under the air intakes, better avionics such as the Elta EL/M-2021B radar, configured cockpit and inflight refueling capability.
* Kfir-TC7 : A two-seat training variant developed from the C7.
* Kfir-C10 : A variant developed especially for export. The most important change is the adaptation of the Elta EL/M-2032 radar. Other changes include HMD capability and two 127*177mm MFD's. This variant is also known as Kfir CE and Kfir 2000.