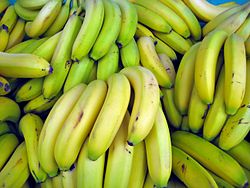 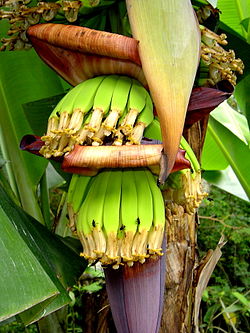 Developing flowers of the Cavendish banana. 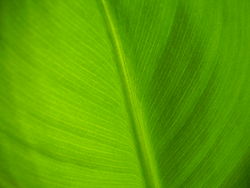 Close up photo of a leaf from the Dwarf Cavendish.

The Dwarf Cavendish banana (or simply Cavendish banana) is a banana cultivar originally from Vietnam and China.[1] It became the primary replacement for the Gros Michel banana in the 1950s after crops of the latter were devastated by the Panama disease. The name 'Dwarf Cavendish' is in reference to the height of the pseudostem, not the fruit (which are medium sized).[2] It is one of the most commonly planted banana variety from the Cavendish group, and the main source of commercial Cavendish bananas along with Grand Nain.[3][4][5][6]

The Cavendish banana is a triploid (AAA) cultivar of Musa acuminata.[7]

Cavendish bananas are named in honour of William Cavendish, 6th Duke of Devonshire, who acquired an early specimen, and from whose hothouses the cultivars were developed for commercial exploitation worldwide.

Cavendish plants grow up to a height of only 6 – 8 ft (1.8 - 2.4 m). The leaves are broad with short petioles. Its shortness makes it stable, wind-resistant, and easier to manage. This, in addition to its fast growth rate, makes it ideal for plantation cultivation.[9] An easily recognizable characteristic of this cultivar is that the male bracts and flowers are not shed.

The fruits of the Cavendish bananas range from about 15 to 25 cm in length, and are thin skinned. Each plant can bear up to 90 fingers.[10]

The fruits of the Cavendish bananas are used in baking, fruit salads, fruit compotes, and to complement foods. The outer skin is partially green when sold in food markets, and turns yellow when it ripens. When overripe, the skin turns black and the flesh becomes mushy. Bananas ripen naturally and are at their peak ripeness when the peel is all yellow with a few dark brown specks beginning to appear.

Cavendish bananas entered the world market through populations that have existed in the Canary Islands since the fifteenth century.[3] They were first imported into England by Thomas Fyffe. They were later determined to be originally from China and Vietnam by William Spencer Cavendish's gardener, Sir Joseph Paxton.[6] They entered commercial production in 1903 but didn't gain prominence until later when Panama disease attacked the dominant Gros Michel ("Big Mike") variety in the 1950s. Because it was successfully grown in the same soils as previously affected Gros Michel plants, many presumed the Cavendish cultivar was more resistant to Panama disease.

Contrary to this notion, in mid-2008, reports from Sumatra and Malaysia suggest Cavendish-like cultivars may be vulnerable to Panama disease.[12] Because cultivated bananas are spread by conventional vegetative reproduction rather than through sexual reproduction, the Cavendish plants are genetically identical and cannot evolve disease resistance. As there is currently no effective fungicide against Panama disease, some have speculated about a future where Cavendish cultivars are not usable for farming. In such a scenario, a separate cultivar may be developed as a replacement (as happened with the Gros Michel).

The Honduras Foundation for Agricultural Research (FHIA) has been cross breeding wild banana types for decades, and has already created new banana varieties that are resistant to the Panama disease. However, the first new varieties have a distinct apple flavor, while otherwise being very similar to the Cavendish in look and handling. The FHIA-01 "Goldfinger" was registered as a patent in 1994 (US Patent PP08983) and the FHIA-03 "Sweetheart" variety is already cultivated in Cuba.