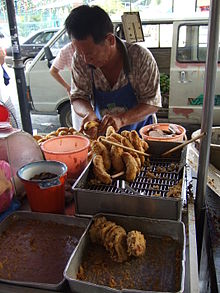 Pisang goreng (fried banana in Malay/Indonesian) is a snack food mostly found throughout Indonesia, Malaysia, and Singapore. In Singapore and some parts of Malaysia it is known as "goreng pisang" (banana fritter). It is consumed as a snack in the morning and afternoon.[1] In Indonesia, pisang goreng is often sold by street vendors,[2] although some sellers have a storefront from which to sell their wares. Pisang Goreng Pontianak are widely popular in Indonesia and exclusively sold in certain retail outlets.

The banana is battered and then deep fried. The fritters that result are often sprinkled with a cinnamon sugar and occasionally served with fresh cream.[citation needed] Today's pisang goreng are more sophisticated and served in various ways, such as with cheese, jam, or chocolate. Some argue that it's done to increase the image of the food as it's traditionally seen as food for middle and low income consumers.[citation needed]

In Suriname and The Netherlands this snack is also known as bakabana (meaning baked banana in Surinamese).[citation needed]

Plantain is often used as the batter adds some flavour to the banana. Pisang Raja is a popular kind of banana used for pisang goreng.

In every region in Indonesia has a recipe Pisang Goreng with a variety of different names. In Bali for example, Pisang Goreng called Godoh Gedang. In Java, called Limpang Limpung . In Sibolga Pisang goreng called Pisang Rakit and at Pontianak[disambiguation needed