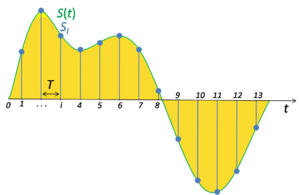 Signal sampling representation. The continuous signal is represented with a green color whereas the discrete samples are in blue.

A sample refers to a value or set of values at a point in time and/or space.

A sampler is a subsystem or operation that extracts samples from a continuous signal. A theoretical ideal sampler produces samples equivalent to the instantaneous value of the continuous signal at the desired points.

Sampling can be done for signals varying in space, time, or any other dimension, and similar results are obtained in two or more dimensions.

For signals that vary with time, let x(t) be a continuous signal to be sampled, and let sampling be performed by measuring the value of the continuous signal every T seconds, which is called the sampling interval. Thus, the sampled signal x[n] given by:

It is possible under some circumstances to reconstruct the original signal completely and exactly (perfect reconstruction).

The Nyquist–Shannon sampling theorem provides a sufficient (but not always necessary) condition under which perfect reconstruction is possible. The sampling theorem guarantees that bandlimited signals (i.e., signals which have a maximum frequency) can be reconstructed perfectly from their sampled version, if the sampling rate is more than twice the maximum frequency. Reconstruction in this case can be achieved using the Whittaker–Shannon interpolation formula.

The observation period is the span of time during which a series of data samples are collected at regular intervals. More broadly, it can refer to any specific period during which a set of data points is gathered, regardless of whether or not the data is periodic in nature. Thus a researcher might study the incidence of earthquakes and tsunamis over a particular time period, such as a year or a century.

The observation period is simply the span of time during which the data is studied, regardless of whether data so gathered represents a set of discrete events having arbitrary timing within the interval, or whether the samples are explicitly bound to specified sub-intervals.

In practice, the continuous signal is sampled using an analog-to-digital converter (ADC), a non-ideal device with various physical limitations. This results in deviations from the theoretically perfect reconstruction capabilities, collectively referred to as distortion.

Various types of distortion can occur, including:

The conventional, practical digital-to-analog converter (DAC) does not output a sequence of dirac impulses (such that, if ideally low-pass filtered, result in the original signal before sampling) but instead output a sequence of piecewise constant values or rectangular pulses. This means that there is an inherent effect of the zero-order hold on the effective frequency response of the DAC resulting in a mild roll-off of gain at the higher frequencies (a 3.9224 dB loss at the Nyquist frequency). This zero-order hold effect is a consequence of the hold action of the DAC and is not due to the sample and hold that might precede a conventional ADC as is often misunderstood. The DAC can also suffer errors from jitter, noise, slewing, and non-linear mapping of input value to output voltage.

Jitter, noise, and quantization are often analyzed by modeling them as random errors added to the sample values. Integration and zero-order hold effects can be analyzed as a form of low-pass filtering. The non-linearities of either ADC or DAC are analyzed by replacing the ideal linear function mapping with a proposed nonlinear function.

Digital audio uses pulse-code modulation and digital signals for sound reproduction. This includes analog-to-digital conversion (ADC), digital-to-analog conversion (DAC), storage, and transmission. In effect, the system commonly referred to as digital is in fact a discrete-time, discrete-level analog of a previous electrical analog. While modern systems can be quite subtle in their methods, the primary usefulness of a digital system is the ability to store, retrieve and transmit signals without any loss of quality.

When it is necessary to capture audio covering the entire 20–20,000 Hz range of human hearing, such as when recording music or many types of acoustic events, audio waveforms are typically sampled at 44.1 kHz (CD), 48 kHz (professional audio), or 96 kHz. The approximately double-rate requirement is a consequence of the Nyquist theorem.

There has been an industry trend towards sampling rates well beyond the basic requirements; 96 kHz and even 192 kHz are available.[1] This is in contrast with laboratory experiments, which have failed to show that ultrasonic frequencies are audible to human observers; however in some cases ultrasonic sounds do interact with and modulate the audible part of the frequency spectrum (intermodulation distortion). It is noteworthy that intermodulation distortion is not present in the live audio and so it represents an artificial coloration to the live sound.[2]

One advantage of higher sampling rates is that they can relax the low-pass filter design requirements for ADCs and DACs, but with modern oversampling sigma-delta converters this advantage is less important.

Audio is typically recorded at 8-, 16-, and 20-bit depth, which yield a theoretical maximum signal to quantization noise ratio (SQNR) for a pure sine wave of, approximately, 49.93 dB, 98.09 dB and 122.17 dB.[3] Eight-bit audio is generally not used due to prominent and inherent quantization noise (low maximum SQNR), although the A-law and u-law 8-bit encodings pack more resolution into 8 bits while increase total harmonic distortion. CD quality audio is recorded at 16-bit. In practice, not many consumer stereos can produce more than about 90 dB of dynamic range, although some can exceed 100 dB. Thermal noise limits the true number of bits that can be used in quantization. Few analog systems have signal to noise ratios (SNR) exceeding 120 dB; consequently, few situations will require more than 20-bit quantization.

For playback and not recording purposes, a proper analysis of typical programme levels throughout an audio system reveals that the capabilities of well-engineered 16-bit material far exceed those of the very best hi-fi systems, with the microphone noise and loudspeaker headroom being the real limiting factors[citation needed].

Speech signals, i.e., signals intended to carry only human speech, can usually be sampled at a much lower rate. For most phonemes, almost all of the energy is contained in the 5Hz-4 kHz range, allowing a sampling rate of 8 kHz. This is the sampling rate used by nearly all telephony systems, which use the G.711 sampling and quantization specifications.

High-definition television (HDTV) is currently moving towards three standards referred to as 720p (progressive), 1080i (interlaced) and 1080p (progressive, also known as Full-HD) which all 'HD-Ready' sets will be able to display. 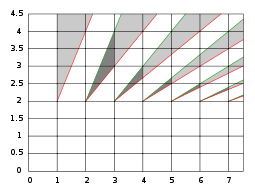 Plot of sample rates (y axis) versus the upper edge frequency (x axis) for a band of width 1; grays areas are combinations that are "allowed" in the sense that no two frequencies in the band alias to same frequency. The darker gray areas correspond to undersampling with the lowest allowable sample rate.
Main article: Undersampling

When one samples a bandpass signal at a rate lower than the Nyquist rate, the samples are equal to samples of a low-frequency alias of the high-frequency signal; the original signal will still be uniquely represented and recoverable if the spectrum of its alias does not cross over half the sampling rate. Such undersampling is also known as bandpass sampling, harmonic sampling, IF sampling, and direct IF to digital conversion.[4]

Oversampling is used in most modern analog-to-digital converters to reduce the distortion introduced by practical digital-to-analog converters, such as a zero-order hold instead of idealizations like the Whittaker–Shannon interpolation formula.

Complex sampling refers to the simultaneous sampling of two different, but related, waveforms, resulting in pairs of samples that are subsequently treated as complex numbers. Usually one waveform

is the Hilbert transform of the other waveform

and the complex-valued function,

is called an analytic signal,  whose Fourier transform is zero for all negative values of frequency. In that case, the Nyquist rate for a waveform with no frequencies ≥ B can be reduced to just B (complex samples/sec), instead of 2B (real samples/sec).[note 1] More apparently, the equivalent baseband waveform,

also has a Nyquist rate of B, because all of its non-zero frequency content is shifted into the interval [-B/2, B/2).

Although complex-valued samples can be obtained as described above, they are much more commonly created by manipulating samples of a real-valued waveform. For instance, the equivalent baseband waveform can be created without explicitly computing

by processing the product sequence

[note 2]  through a digital lowpass filter whose cutoff frequency is B/2.[note 3] Computing only every other sample of the output sequence reduces the sample-rate commensurate with the reduced Nyquist rate. The result is half as many complex-valued samples as the original number of real samples. No information is lost, and the original s(t) waveform can be recovered, if necessary.