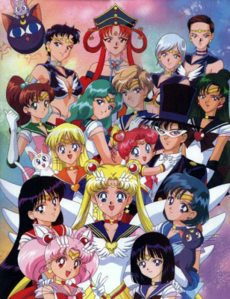 Main characters of Sailor Moon, a classic example of a magical girl anime and manga

Magical girls (魔法少女, mahō shōjo?, also known as mahou shoujo or majokko) belong to a sub-genre of Japanese fantasy anime and manga. Magical girl stories feature young girls with superhuman abilities, forced to fight evil and to protect the Earth. They often possess a secret identity,[1] although the name can just refer to young girls who follow a plotline involving magic and a transformation (such as Full Moon o Sagashite and Sailor Moon). Ojamajo Doremi features magical girls as protagonists, but its plot differs from the standard as the girls use magic for friendship, behavior and achieving goals, rather than for attacking antagonists. The Japanese language identifies magical girls as majokko (魔女っ子?, literally "witch girl"), though this term does not generally apply to modern magical-girl anime. Sally, the Witch (1966) counts as the first magical girl anime.[1]

A general example of a magical girl is Sakura Kinomoto from the series Cardcaptor Sakura, a normal girl who gains magical powers, and becomes involved in a quest for various magical objects. Another magical girl includes Lucia Nanami from Mermaid Melody Pichi Pichi Pitch whose true identity as a mermaid princess prevents her from declaring love to a young surfer; she battles enemies using the power of her voice and songs with the help from the other mermaid princesses. Other magical-girl subjects may appear in the guise of witches, or (rarely) of psychics (such as Hailey from Queen Bee). Examples of conventional magical girls include the protagonists of: Princess Tutu, Sailor Moon, and Shugo Chara!.

In 1962 Secret Akko-chan introduced the convention that the magical girl gets her powers from a "special object".[2] Paul Gravett regards Princess Sapphire as a prototype for magical girls. Born with two hearts, one of a girl and one of a boy, she must pass as a boy in order to save her kingdom from falling into the clutches of her evil uncle. In feminine guise (with aid of a blonde wig) she romances a prince.[3]

The Japanese dub of the American TV series Bewitched became popular among young Japanese girls in the 1960s.[4] This occurred in the formative[citation needed] years of Japanese animation as a genre, and animators wanted to produce a series aimed at young girls;[who?] since the target audience approved of Bewitched, animators decided to make a series about a witch[citation needed] — not a witch in the usual Western sense of the word, resembling the evil witch in Hansel and Gretel, but a witch in the same vein as Bewitched's Samantha: a witch who looked just like a normal person and used her magic for everyday tasks and the good of others around her. This inspired Mitsuteru Yokoyama — best known in the U.S. as the creator of Tetsujin 28-go — to invent Sally the Witch,[5] which aired on television in serial form in 1966.[2]

Commentators[who?] regard Cutie Honey, which began in 1973, as the prototype for the transforming magical-girl genre.[citation needed] Sailor Moon, which began in 1992, later popularized the genre. At the same time, many related video games ware made too.[6] Typically, such transforming sequences involve pirouetting, loss of normal clothes (usually censored) and the sudden appearance of a magical girl uniform and weapon.

According to the analyst John Oppliger of AnimeNation, after 2003 magical girl anime—marketed (at least partially) to male audiences—has become a prolific trend alongside the traditional female-oriented works, coinciding with the rise of moe-genre popularity.[7] As a prime example of this, note Magical Girl Lyrical Nanoha.

Magical girls generally obtain their powers from some sort of enchanted object: such as a pendant, a wand, a compact, or a ribbon. By concentrating on this object, and in some cases by speaking a special phrase or command, a girl undergoes an intricate transformation sequence and changes to her fully powered form. A major theme of magical girl stories involves learning to harness these powers and develop them fully. Teams of magical girls often learn to combine their powers to perform massive, super-charged attacks. Powers or no powers, though, magical girls rarely suffer defeat even in normal form, as they tend to learn how to cope with opponents in their powerless form, or they might have learned some ordinary acrobatics, martial arts, or other offensive or defensive actions to supplement their supernatural talents, although they do need to use their power against whatever villains they have to fight.[8]

Magical girls do not operate alone in their adventures. They occasionally receive the help of mysterious, magical boys. These boys sometimes disdain their female counterparts, but at other times they show romantic interest in one of the girls, or vice versa. Another common theme involves some sort of talking-animal sidekick with magical powers of its own. These pets rarely participate in combat; instead, they offer advice and help train the girls in the use of their abilities.

Magical girls' power potential is generally inestimable, which also makes their abilities vaguely defined. While their powers evidently[original research?] have a source behind them, the extent and exact nature of those powers usually remains unknown or unclear. However, because the function of magical girls is generally to unleash and harness such mystical powers, and their ability to summon powers depends on their mind state, which, in turn, depends on various emotional factors such as combat awareness, sense of duty, realizing what they must protect and the fact that they are the ones to protect, and so forth. Thus a magical girl may summon extraordinary new magical powers—powers previously unavailable to her—in the last moments of an epic battle. Such powers can serve as a deus ex machina to resolve the major conflict in a climactic fashion. To some extent, this seems to differ from shōnen in that shōnen tends to define a hero's powers specifically and to indicate what those powers can achieve (in most cases said powers increase as time goes by, usually by extensive training), whereas magical girl series tend to leave these factors ambiguous, and instead allow her powers to be more free-flowing and open to change based on the situation. However, since magical girls tend to harness their power using their mind and might even fuel their power with their mindful indomitability, the extra powers can generally be attributed to a power source from their mind or the power sources' response to their mind. Unlike shōnen characters, who tend to have an affection in adventuring and heroism, magical girls are generally peaceful and they tend to prefer the normal way of life, so they tend to develop combat awareness along the way and experience an emotional upheaval during an epic battle, resulting in a dramatic power increase that might be repeatable only when the situation calls for it.

Magical girls spend much of their time trying to keep their powers and their normal identities secret. The reasons for this vary: they may wish to avoid capture by the enemy, they may simply feel embarrassed, and sometimes they have even received severe warnings not to let their friends and family know about their secret powers. However, despite their best attempts to keep their normal and supernatural lives separate,[9] strange events tend to occur to magical girls in normal life with alarming regularity, forcing them to transform and fight.

Magical girl stories tend to be emotion-oriented, upbeat and cheerful. Magical girls often represent that special time in a young, Japanese girl's life where she is free from adult responsibility and submission. The characters fight for idealistic causes such as love, peace, hope, and beauty—rarely for revenge. By forming teams, the heroines learn the values of friendship and co-operation. Even the magical girls' enemies leave them alone most of the time; the girls need to pursue the enemies and to attempt to thwart their plans. The genre can be intriguing due to the contrasts and conflicts the magical girls represent, caught up as they are between the childish and the mature, or between helplessness and power.

Until the appearance of Sailor Moon, the original term mahō shōjo in Japan referred primarily to girls who did not transform themselves and who used magic for acts of mercy and succor rather than for heroism against evil; for example, Mako of Mahō no Mako-chan. In fact, magical girl series such as Himitsu no Akko-chan and Fushigi na Merumo existed in which the heroines received the power to transform themselves into whatever they wished, not for the sake of fighting evil, but for the sake of adventure. However, the term is generally used[by whom?] in the west to refer only to evil-fighting magical girls. The series Sally, the Witch and Minky Momo are hardly known in the United States[citation needed] although they are popular works of magical girl series in Japan.

One series transcended[clarification needed] these two cases: Akazukin Chacha, a Japanese mahō shōjo manga, portrayed the adventures of the protagonist Chacha and her friends. When Nihon Ad Systems and Studio Gallop adapted the manga into anime, Chacha became a "Magical Princess" in order to battle with villains. Another genre-crossing series, Majokko Megu-chan (Toei, 1974–75), sees the heroine, Megu, use her magic not only to fight villains but also to deal with everyday situations (such as teaching her younger brother to swim). In 2004, Pretty Cure and Magical Girl Lyrical Nanoha premiered, both shows featuring an emphasis on combat alongside magical girl based powers.