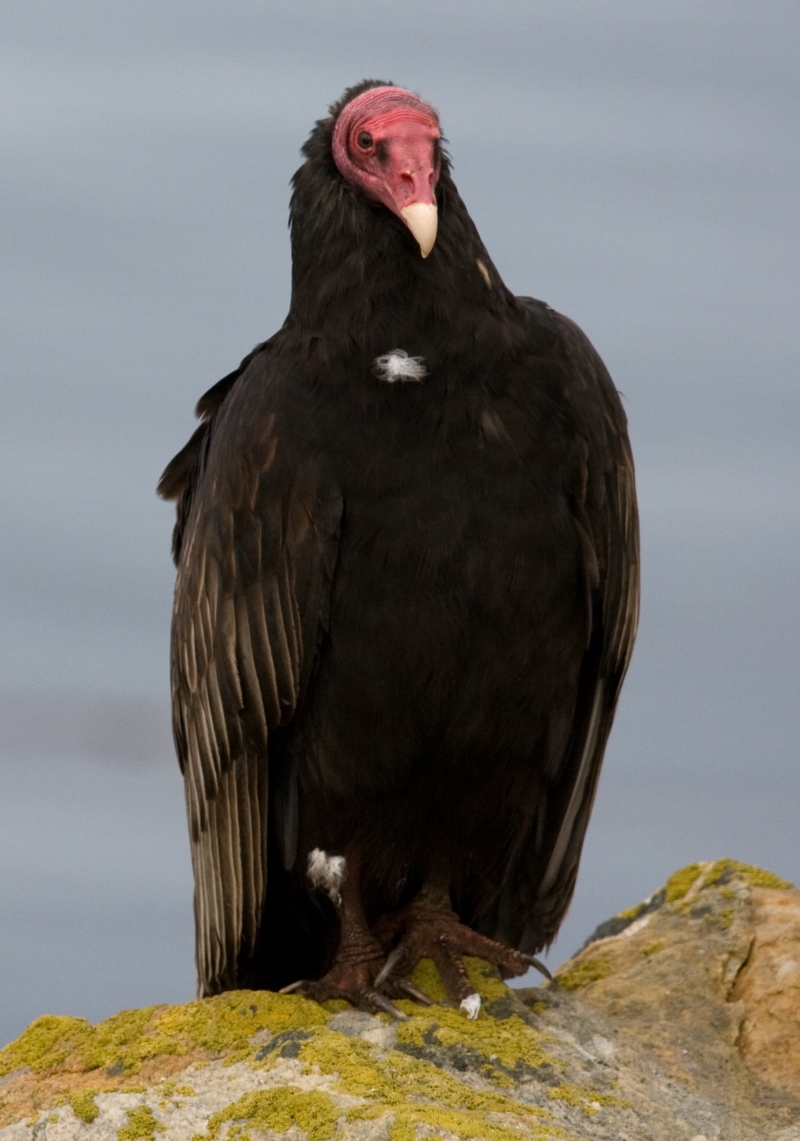 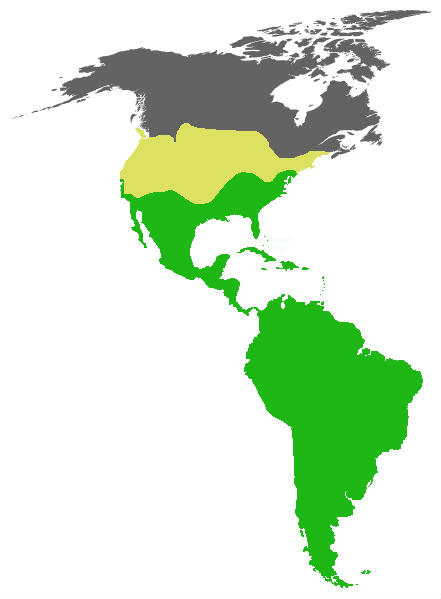 The Turkey Vulture, "Cathartes aura", also known in some n regions as the Turkey Buzzard (or just "buzzard"), is a found throughout most of the . One of three species in the genus "", in the family , it is the most widespread of the s, ranging from southern to the southernmost tip of . It inhabits a variety of open and semi-open areas, including subtropical forests, shrublands, pastures, and deserts. With a wingspan of 173&ndash;183 cm (68&ndash;72 in) and an average weight of 1.4 kg (3.1 lb), the Turkey Vulture is a large bird. It has dark brown to black plumage; a featherless, purplish-red head and neck; and a short, hooked, ivory-colored .

The Turkey Vulture is a and feeds almost exclusively on . It finds its meals using its sense of smell, flying low enough to detect the gases produced by the beginnings of the process of decay in dead animals. In flight, it uses s to move through the air, flapping its wings infrequently. It roosts in large community groups. Lacking a syrinx&mdash;the vocal organ of birds&mdash;its only vocalizations are grunts or low hisses. It nests in caves, hollow trees, or thickets, each year generally raising two chicks, which it feeds by regurgitation. It has very few natural s. In the , the vulture receives legal protection under the .

The Turkey Vulture received its from the resemblance of the adult's bald red head and its dark plumage to that of the male , while the name "vulture" is derived from the word "vulturus", meaning "tearer," and is a reference to its feeding habits. The word "buzzard" is used by North Americans to refer to this raptor, yet in the Old World this word refers to members of the genus "". [cite web
title =Turkey Vulture
work =Birds of Texas
publisher =Texas Parks & Wildlife
year =2001
url =http://www.passporttotexas.com/birds/oct00.html
accessdate = 2007-10-29 ] The generic term "Cathartes" means "purifier" and is the ized form from the Greek "kathartēs"/καθαρτης. [ cite book|last=Liddell| first=Henry George|coauthor=Robert Scott|year=1980|title=Greek-English Lexicon, Abridged Edition |publisher=Oxford University Press|location= Oxford|isbn= 0-19-910207-4] The species name, "aura", is Latinized from the Native Mexican word for the bird, "auroura".

The exact placement of the Turkey Vulture and the remaining six species of s remains unclear. Though both are similar in appearance and have similar ecological roles, the New World and evolved from different ancestors in different parts of the world. Just how different the two are is currently under debate, with some earlier authorities suggesting that the New World vultures are more closely related to . [Sibley, Charles G. and Burt L. Monroe. 1990. " [http://books.google.com/books?vid=ISBN0300049692 Distribution and Taxonomy of the Birds of the World] ". Yale University Press. ISBN 0-300-04969-2. Accessed 2007-04-11.] More recent authorities maintain their overall position in the order along with the Old World Vultures [Sibley, Charles G., and Jon E. Ahlquist. 1991. " [http://books.google.com/books?vid=ISBN0300040857 Phylogeny and Classification of Birds: A Study in Molecular Evolution] ". Yale University Press. ISBN 0-300-04085-7. Accessed 2007-04-11.] or place them in their own order, Cathartiformes. [Ericson, Per G. P.; Anderson, Cajsa L.; Britton, Tom; Elżanowski, Andrzej; Johansson, Ulf S.; Kallersjö, Mari; Ohlson, Jan I.; Parsons, Thomas J.; Zuccon, Dario & Mayr, Gerald (2006): Diversification of Neoaves: integration of molecular sequence data and fossils. "" online: 1-5. DOI|10.1098/rsbl.2006.0523 [http://www.systbot.uu.se/staff/c_anderson/pdf/neoaves.pdf PDF preprint] [http://royalsociety.metapress.com/media/public/contributionsupplementalmaterials/0/5/8/3/058352377848735w/archive1.pdf Electronic Supplementary Material] (PDF)] The has removed the New World Vultures from and instead placed them in "", but notes that a move to Falconiformes or Cathartiformes is possible.

There are five subspecies of Turkey Vulture:
*"C. a. aura" is the nominate subspecies. It is found from south through and the . This subspecies occasionally overlaps its range with other subspecies. It is the smallest of the subspecies but is nearly indistinguishable from "C. a. meridionalis" in color.
*"C. a. jota", the Chilean Turkey Vulture, is larger, browner, and slightly paler than "C. a. ruficollis". The secondary feathers and wing coverts may have gray margins.

The two front toes of the foot are long and have small webs at their bases. Tracks are large, between 3.75 and 5.5 inches in length (9.5-14 cm) and 3.25 and 4 inches in width (8.2-10.2 cm), both measurements including claw marks. Toes are arranged in the classic, anisodactyl pattern.

(sometimes mistakenly called "") Turkey Vultures are sometimes seen. [Citation
last =Kirk
first =D. A.
last2 =Mossman
first2 =M. J.
contribution =Turkey Vulture (Cathartes aura)
year =1998
title =The Birds of North America
editor-last =A. Poole and F. Gill
volume =339
place=, PA.
publisher =The Birds of North America, Inc.
id = ] The well-documented records come from the , but this probably reflects the fact that such birds are more commonly reported by s there, rather than a geographical variation. Even in the United States, white Turkey Vultures (although they presumably always turned up every now and then) were only discussed in birder and raptor conservation circles and are not scientifically studied. [Golden Gate Raptor Observatory: " [http://www.ggro.org/rare-raptors.html Rare Raptors] ". Retrieved 2007-09-17.]

The Turkey Vulture, like most other vultures, has very few vocalization capabilities. Because it lacks a syrinx, it can only utter hisses and grunts.

The Turkey Vulture has a large range, with an estimated global occurrence of 28,000,000 km². It is the most abundant vulture in the Americas. Its global population is estimated to be 4,500,000 individuals.

The Turkey Vulture is gregarious and roosts in large community groups, breaking away to forage independently during the day. Several hundred vultures may roost communally in groups which sometimes even include Black Vultures. It roosts on dead, leafless trees; though it nests in caves, it does not enter them except during the breeding season. The Turkey Vulture lowers its night-time body temperature by about 6 °C (11 °F) to convert|34|C|F, becoming slightly hypothermic.

This vulture is often seen standing in a spread-winged stance. The stance is believed to serve multiple functions: drying the wings, warming the body, and baking off bacteria. It is practiced more often following damp or rainy nights. This same behavior is displayed by other s, by s, and by s. Like s, the Turkey Vulture often defecates on its own legs, using the evaporation of the water in the feces and/or urine to cool itself, a process known as . [cite web | last = Ridenhou | first = Larry | title = NCA - Turkey Vulture | work = Snake River Birds of Prey National Conservation Area | publisher = Bureau of Land Management | url = http://www.birdsofprey.blm.gov/nat-res/tv.htm | accessdate = 2006-12-17 ] It cools the blood vessels in the unfeathered tarsi and feet, and causes white to streak the legs. [cite book
last =Gordon
first =Malcolm S.
title =Animal Physiology: Principles and Adaptations
publisher =Macmillan
year =1977
pages =357
url = http://books.google.com/books?id=G7o0AAAAMAAJ&dq=&pgis=1
isbn = ]

The Turkey Vulture has few natural predators. Its primary form of defense is regurgitating semi-digested meat, a foul-smelling substance which deters most creatures intent on raiding a vulture nest.

The Turkey Vulture is awkward on the ground with an ungainly, hopping walk. It requires a great deal of effort to take flight, flapping its wings while pushing off the ground and hopping with its feet. While soaring, the Turkey Vultures holds its wings in a shallow V-shape and often tips from side to side, frequently causing the gray flight feathers to appear silvery as they catch the light. The flight of the Turkey Vulture is an example of static soaring flight, in which it flaps its wings very infrequently, and takes advantage of rising s to stay soaring.

The Turkey Vulture feeds primarily on a wide variety of carrion, from small mammals to large grazers, preferring those recently dead, and avoiding carcasses that have reached the point of . It may rarely feed on plant matter, shoreline vegetation, pumpkin and other crops, live insects and other .. In South America, it is known to feed on the fruits of the introduced . [Pinto, O. M. O., Dos frutos da palmeira Elaeis guineensisna dieta de Cathartes aura ruficollis. Hornero 8:276-277, 1965; Mauro Galetti & Paulo R. Guimarães Jr., "Seed dispersal of Attalea phalerata (Palmae) by Crested caracaras (Caracaraplancus) in the Pantanal and a review of frugivory by raptors", "Ararajuba" 12 (2):133-135,December 2004; avaliable at www.ararajuba.org.br/sbo/ararajuba/artigos/Volume122/ara122not1.pdf] It rarely, if ever, kills prey itself.

The Turkey Vulture forages by smell, an ability that is uncommon in the avian world. It often will fly low to the ground to pick up the scent of ethyl mercaptan, a gas produced by the beginnings of decay in dead animals. The olfactory lobe of its , responsible for processing smells, is particularly large compared to that of other animals.

The breeding season of the Turkey Vulture commences in March, peaks in April to May, and continues into June.Clarifyme|date=March 2008

Eggs are generally laid in the nesting site in a protected location such as a cliff, a cave, a rock crevice, a burrow, inside a hollow tree, or in a thicket. There is little or no construction of a nest; eggs are laid on a bare surface. Females generally lay two eggs, but sometimes one and rarely three. The eggs are cream-colored, with brown or lavender spots around their larger end. Both parents incubate, and the young hatch after 30 to 40 days. Chicks are , or helpless at birth. Both adults feed the chicks by regurgitating food for them, and care for them for 10 to 11 weeks. When adults are threatened while nesting, they may flee, or they may regurgitate on the intruder or feign death. If the chicks are threatened in the nest, they defend themselves by hissing and regurgitating. The young fledge at about nine to ten weeks. Family groups remain together until fall.

The Turkey Vulture is sometimes accused of carrying or hog cholera, both livestock diseases, on its feet or bill by cattle ranchers and is therefore occasionally perceived as a threat.

The Turkey Vulture species receives special legal protections under the in the ,