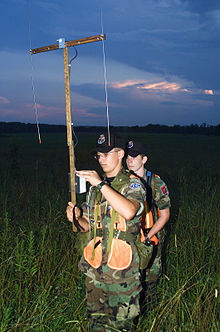 A radio direction finder (RDF) is a device for finding the direction to a radio source. Due to low frequency propagation characteristic to travel very long distances and "over the horizon", it makes a particularly good navigation system for ships, small boats, and aircraft that might be some distance from their destination (see Radio navigation).

The US Army Air Corps in 1931 tested a primitive radio compass that used commercial stations as the beacon.[1] 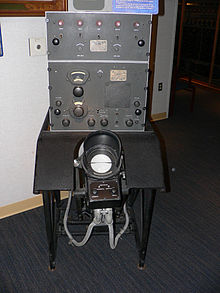 Radio Direction Finding works by comparing the signal strength of a directional antenna pointing in different directions. At first, this system was used by land and marine-based radio operators, using a simple rotatable loop antenna linked to a degree indicator. This system was later adopted for both ships and aircraft, and was widely used in the 1930s and 1940s. On pre-World War II aircraft, RDF antennas are easy to identify as the circular loops mounted above or below the fuselage. Later loop antenna designs were enclosed in an aerodynamic, teardrop-shaped fairing. In ships and small boats, RDF receivers first employed large metal loop antennae, similar to aircraft, but usually mounted atop a portable battery-powered receiver.

In use, the RDF operator would first tune the receiver to the correct frequency, then manually turn the loop, either listening or watching an S meter to determine the direction of the null (the direction at which a given signal is weakest) of a long wave (LW) or medium wave (AM) broadcast beacon or station (listening for the null is easier than listening for a peak signal, and normally produces a more accurate result). This null was symmetrical, and thus identified both the correct degree heading marked on the radio's compass rose as well as its 180-degree opposite. While this information provided a baseline from the station to the ship or aircraft, the navigator still needed to know beforehand if he was to the east or west of the station in order to avoid plotting a course 180-degrees in the wrong direction. By taking bearings to two or more broadcast stations and plotting the intersecting bearings, the navigator could locate the relative position of his ship or aircraft.

Later, RDF sets were equipped with rotatable ferrite loopstick antennae, which made the sets more portable and less bulky. Some were later partially automated by means of a motorized antenna (ADF). A key breakthrough was the introduction of a secondary vertical whip or 'sense' antenna that substantiated the correct bearing and allowed the navigator to avoid plotting a bearings 180 degrees opposite the actual heading. After World War II, there many small and large firms making direction finding equipment for mariners, including Apelco, Aqua Guide, Bendix, Gladding (and its marine division, Pearce-Simpson), Ray Jefferson, Raytheon, and Sperry. By the 1960s, many of these radios were actually made by Japanese electronics manufacturers, such as Panasonic, Fuji Onkyo, and Koden Electronics Co., Ltd. In aircraft equipment, Bendix and Sperry-Rand were two of the larger manufacturers of RDF radios and navigation instruments.

Usage in maritime and aircraft navigation 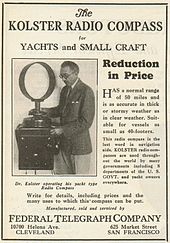 Radio transmitters for air and sea navigation are known as beacons and are the radio equivalent to a lighthouse. The transmitter sends a Morse Code transmission on a Long wave (150 – 400 kHz) or Medium wave (AM) (520 – 1720 kHz) frequency incorporating the station's identifier that is used to confirm the station and its operational status. Since these radio signals are broadcast in all directions (omnidirectional) during the day, the signal itself does not include direction information, and these beacons are therefore referred to as non-directional beacons, or NDBs.

As the commercial medium wave (AM) broadcast band lies within the frequency capability of most RDF units, these stations and their transmitters can also be used for navigational fixes. While these commercial radio stations can be useful due to their high power and location near major cities, there may be several miles between the location of the station and its transmitter, which can reduce the accuracy of the 'fix' when approaching the broadcast city. A second factor is that some AM radio stations are omnidirectional during the day, and switch to a reduced power, directional signal at night.

RDF was once the primary form of aircraft and marine navigation. Strings of beacons formed "airways" from airport to airport, while marine NDBs and commercial AM broadcast stations provided navigational assistance to small watercraft approaching a landfall. In the United States, commercial AM radio stations were required to broadcast their station identifier once per hour for use by pilots and mariners as an aid to navigation. In the 1950s, aviation NDBs were augmented by the VOR system, in which the direction to the beacon can be extracted from the signal itself, hence the distinction with non-directional beacons. Use of marine NDBs was largerly supplanted in North America by the development of LORAN in the 1970s.

Today many NDBs have been decommissioned in favor of faster and far more accurate GPS navigational systems. However the low cost of ADF and RDF systems, and the continued existence of AM broadcast stations (as well as navigational beacons in countries outside North America) has allowed these devices to continue to function, primarily for use in small boats, as an adjunct or backup to GPS.

An automatic direction finder (ADF) is a marine or aircraft radio-navigation instrument that automatically and continuously displays the relative bearing from the ship or aircraft to a suitable radio station.[2][3] ADF receivers are normally tuned to aviation or marine NDBs operating in the LW band between 190 – 535 kHz. Like RDF units, most ADF receivers can also receive medium wave (AM) broadcast stations, though as mentioned, these are less reliable for navigational purposes.

The operator tunes the ADF receiver to the correct frequency and verifies the identity of the beacon by listening to the Morse code signal transmitted by the NDB. On marine ADF receivers, the motorized ferrite-bar antenna atop the unit (or remotely mounted on the masthead) would rotate and lock when reaching the null of the desired station. A centerline on the antenna unit moving atop a compass rose indicated in degrees the bearing of the station. On aviation ADFs, the unit automatically moves a compass-like pointer (RMI) to show the direction of the beacon. The pilot may use this pointer to home directly towards the beacon, or may also use the magnetic compass and calculate the direction from the beacon (the radial) at which their aircraft is located.

Unlike the RDF, the ADF operates without direct intervention, and continuously displays the direction of the tuned beacon. Initially, all ADF receivers, both marine and aircraft versions, contained a rotating loop or ferrite loopstick aerial driven by a motor which was controlled by the receiver. Like the RDF, a sense antenna verified the correct direction from its 180-degree opposite.

More modern aviation ADFs contain a small array of fixed aerials and use electronic sensors to deduce the direction using the strength and phase of the signals from each aerial. The electronic sensors listen for the trough that occurs when the antenna is at right angles to the signal, and provide the heading to the station using a direction indicator. In flight, the ADF's RMI or direction indicator will always point to the broadcast station regardless of aircraft heading, however a banked attitude can have a slight affect on the reading, the needle will still generally indicate towards the beacon, however it suffers from DIP error where the needle dips down in the direction of the turn. Such receivers can be used to determine current position, track inbound and outbound flight path, and intercept a desired bearing. These procedures are also used to execute holding patterns and non-precision instrument approaches.

As an aircraft nears an NDB station, the ADF becomes increasingly sensitive, small lateral deviations result in large deflections of the needle which sometimes shows erratic left/right oscillations.[4] Ideally, as the aircraft overflies the beacon, the needle swings rapidly from directly ahead to directly behind. This indicates station passage and provides an accurate position fix for the navigator. Less accurate station passage, passing slightly to one side or another, is shown by slower (but still rapid) swinging of the needle. The time interval from the first indications of station proximity to positive station passage varies with altitude — a few moments at low levels to several minutes at high altitude.

The ADF may be used to home in on a station. Homing is flying the aircraft on the heading required to keep the needle pointing directly to the 0° (straight ahead) position. To home into a station, tune the station, identify the Morse code signal, then turn the aircraft to bring the ADF azimuth needle to the 0° position. Turn to keep the ADF heading indicator pointing directly ahead. Homing is regarded as poor piloting technique because the aircraft may be blown significantly or dangerously off-course by a cross-wind, and will have to fly further and for longer than the direct track.

The ADF may also be used to track a desired course using a ADF and allowing for winds aloft, winds which may blow the aircraft off-course. Good pilotage technique has the pilot calculate a correction angle that exactly balances the expected crosswind. As the flight progresses, the pilot monitors the direction to or from the NDB using the ADF, adjusts the correction as required. A direct track will yield the shortest distance and time to the ADF location.

A radio-magnetic indicator (RMI) is an alternate ADF display providing more information than a standard ADF. While the ADF shows relative angle of the transmitter with respect to the aircraft, an RMI display incorporates a compass card, actuated by the aircraft's compass system, and permits the operator to read the magnetic bearing to or from the transmitting station, without resorting to arithmetic.

Most RMI incorporate two direction needles. Often one needle (thicker and/or double-barred) is connected to an ADF and the other (generally the thin, single-barred needle) is connected to a VOR. Using multiple indicators a navigator can accurately fix the position of their aircraft without requiring station passage. There is great variation between models and the operator must take care that their selection displays information from the appropriate ADF and VOR.