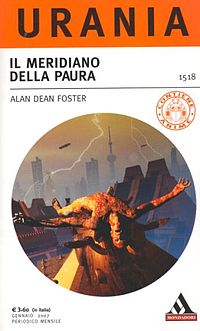 The first issue featured the novel The Sands of Mars by Arthur C. Clarke (as Le sabbie di Marte). The original name of the series was I Romanzi di Urania ("Urania's novels"), to differentiate it from another magazine with the same name (but popularly known as Urania Rivista, "Urania Magazine"), which featured only short stories. The latter, however, lasted only 14 issues, and Romanzi di Urania soon took the simpler name, which still holds today. Short story collections were thenceforth published in the main series, which at its height had a weekly periodicity with a circulation of 160,000 copies a month. Since the very beginning Urania has been indeed the best selling SF magazine of Italy, also introducing to Italian readers some famed authors like Isaac Asimov, Alfred Elton van Vogt, Robert A. Heinlein, J. G. Ballard, Philip K. Dick and many others. The first editor was Giorgio Monicelli (brother of movie director Mario Monicelli): Monicelli is credited with the invention of the word fantascienza, meaning science-fiction in Italian. From 1964 to 1985 novels and short stories were selected by the renowned Italian writers and intellectuals Carlo Fruttero and Franco Lucentini, who also appeared in the magazine with a few short stories written under pseudonyms. Their successor was Gianni Montanari, a well-known SF editor and writer, who worked for the magazine until 1990.

Most of the novels and short stories were from American and British authors (with some French novels in the 1950s). Italian authors appeared uncredited, only under pseudonyms. In recent times Italian SF writers are a more frequent presence. The competition of Premio Urania ("Urania Award") was launched in 1990, open to all previously unpublished Italian novels from famous or unknown authors. The winner is awarded with publication in the magazine. The first winner was Vittorio Catani with his Gli universi di Moras (Urania #1120). In 1994 Urania published the first novel by now-world-famed Valerio Evangelisti, who had won the Premio Urania for that year with Nicholas Eymerich, inquisitore. Other winners include Nicoletta Vallorani and Massimo Mongai.

First covers were by Carlo Jacono and Kurt Caesar, but the «golden era» of the magazine was marked by the renowned Dutch painter Karel Thole, who introduced his unparalleled, bizarre medley of surrealism, horror, classical citations and sense of humour. Other outstanding cover artists who worked for Urania were Vicente Segrelles from Spain (1988–1991) and Oscar Chichoni from Argentina (1990s). Current cover artist is Franco Brambilla. 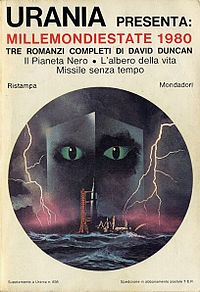 A cover by Karel Thole for Millemondi, a spin-off series of reprints or short stories collections. 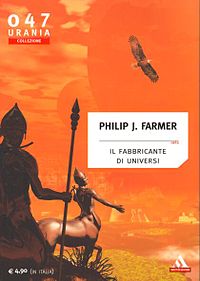 A cover by Franco Brambilla for a recent issue of Urania Collezione, a reprint of Philip J. Farmer's The Maker of Universes.

Also a spin-off of Urania is Epix (rechristened Urania Epix starting from issue no. 10), a monthly launched in 2009. It houses horror, fantasy and fantastic novels or anthology, mainly by Italian authors.

For many years Urania included a comic strip section: main titles were B.C. by Johnny Hart, The Wizard of Id, by the same Hart and Brant Parker and Catfish by Bollen & Peterman.

Urania is currently published every month, but with a slightly decreasing success; Urania Collezione sells a little more copies. Urania is by far the longest life science fiction series published in Italy (in July 2005 the issue number 1500 was released: it contained the translation of Stories for Men, a short novel by John Kessel; Il ranch di Cranwell, a short novel by Giorgio Monicelli; and short stories by Fruttero & Lucentini, Gianni Montanari, and Giuseppe Lippi). Both series share editor-in-chief Giuseppe Lippi and cover artist Franco Brambilla.