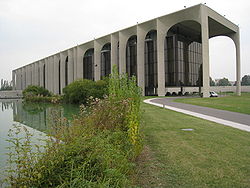 Founded by the 18-year-old Arnoldo Mondadori in 1907 to publish the magazine titled Luce!, it soon became an important publisher. Its headquarters are in Milan.

It is controlled by Fininvest, Silvio Berlusconi's family holding company. Marina Berlusconi is the chairman.

Between 1989 and 1991, there has been a financial conflict between Silvio Berlusconi and Carlo De Benedetti, two of the largest employers of those years.

On 20 June 1990 was the first verdict: the agreement between De Benedetti and Formenton was considered still valid; as a consequence, the Mondadori shares became owned by the CIR (De Benedetti) and Berlusconi left the presidence of the company.

Berlusconi and the Formentons then appealed at the Appeal Court of Rome, which assigned the case to Civil Section I. This section was chaired by Arnaldo Valente and the Judge-Rapporteur was Vittorio Metta. The ruling was made public on 24 January 1991 and nullified the arbitrary award verdict and gave the Mondadori shares back to Berlusconi's Fininvest.

Mondadori in the Italian gambling sector

Recently Mondadori has accessed to the gambling sector in Italy with the society Glaming. That has raised objection for conflict of interest about Silvio Berlusconi, because the sector is managed by the Italian Monopoli di Stato (state monopolies) and Berlusconi is the Italian premier.

The group today includes nine distinct publishing houses, a number of which have more than one imprint:

Edizioni Mondadori
Founded in 1907 by Arnoldo Mondadori in Ostiglia, but based in Milan since 1919, Edizioni Mondadori became one of the best-known Italian book publishers, with early collaborations with Disney and the Il Giallo Mondadori series of mystery/crime novels.
Giulio Einaudi editore
Founded in 1933 by Giulio Einaudi in Turin, this also became one of the most significant Italian publishing houses of the twentieth century. Its authors included Cesare Pavese, Elio Vittorini, Italo Calvino and Leone Ginzburg, and it was the publisher of Antonio Gramsci’s Prison Notebooks. It was acquired by Mondadori in 1994.
Edizioni EL
Based in Trieste and publishing children’s books under the imprints EL, Einaudi Ragazzi and Emme Edizione.[4] Giulio Einaudi editore has a 50% stake in the company
Sperling & Kupfer
Acquired by Mondadori in the 1980s, this publishing house founded in 1899 is one of the oldest publishing houses in Milan. Its traditional international focus, and concentration on current affairs, has been supplemented in recent years by publications in fiction, non-fiction, economics, manuals and popular science. Its imprints include Frassinelli, and Mondadori Informatica.[5]
Edizioni Piemme
Particularly active in the area of books for children, and based in Casale Monferrato.[6]
Mondadori Electa
A group based in Milan with three imprints: Electa, active in the art and history of art sector since 1945; Mondadori, which publishes illustrated books in areas such as nature, hobbies and history as well as tourist guides; and Mondadori Arte, intended to present art, architecture, design and archeology to non-specialist audiences.[7]
Mondadori Education
formerly Edumond Le Monnier, acquired in 2008 and based in Milan, Bologna and Florence.[8]
Harlequin Mondadori, Milan
A joint venture with Harlequin Enterprises specializing in fiction for women and based in Milan.[9]
Grupo Editorial Random House Mondadori
Based in Barcelona, this publishing house, a joint venture with Random House, also has operations in Argentina, Chile, Uruguay, Mexico, Venezuela and Colombia and plans to target the Spanish-speaking market in the United States.[10]