Negroponte was born to Dimitri John Negroponte, a Greek shipping magnate, and grew up in New York City's Upper East Side. He is the younger brother of John Negroponte, former United States Deputy Secretary of State.

He attended Buckley School in New York City, Le Rosey in Switzerland, and The Choate School (now Choate Rosemary Hall) in Wallingford, Connecticut, from which he graduated in 1961. Subsequently, he studied at MIT as both an undergraduate and graduate student in Architecture where his research focused on issues of computer-aided design. He earned a Master's degree in architecture from MIT in 1966.

Negroponte joined the faculty of MIT in 1966. For several years thereafter he divided his teaching time between MIT and several visiting professorships at Yale, Michigan and the University of California, Berkeley.

In 1967, Negroponte founded MIT's Architecture Machine Group, a combination lab and think tank which studied new approaches to human-computer interaction.[1] In 1985, Negroponte created the MIT Media Lab with Jerome B. Wiesner.[2] As director, he developed the lab into the pre-eminent computer science laboratory for new media and a high-tech playground for investigating the human-computer interface. Negroponte also became a proponent of intelligent agents and personalized electronic newspapers,[3] for which he popularized the term the Daily Me.

In 1992, Negroponte became involved in the creation of Wired Magazine as the first investor. From 1993 to 1998, he contributed a monthly column to the magazine in which he reiterated a basic theme: "Move bits, not atoms."

Negroponte expanded many of the ideas from his Wired columns into a bestselling book Being Digital (1995),[4] which made famous his forecasts on how the interactive world, the entertainment world and the information world would eventually merge. Being Digital was a bestseller and was translated into some twenty languages. Negroponte is a digital optimist who believed that computers would make life better for everyone.[5] However, critics such as Cass Sunstein[6] have faulted his techno-utopian ideas for failing to consider the historical, political and cultural realities with which new technologies should be viewed. Negroponte's belief that wired technologies such as telephones will ultimately become unwired by using airwaves instead of wires or fiber optics, and that unwired technologies such as televisions will become wired, is commonly referred to as the Negroponte switch. 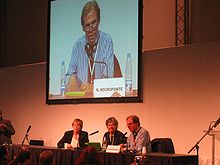 In November 2005, at the World Summit on the Information Society held in Tunis, Negroponte unveiled the concept of a $100 laptop computer, The Children's Machine, designed for students in the developing world.[7] The price has increased to US$180, however. The project is part of a broader program by One Laptop Per Child, a non-profit organisation started by Negroponte and other Media Lab faculty, to extend Internet access in developing countries.

Negroponte is an active angel investor and has invested in over 30 startup companies over the last 30 years, including Zagats, Wired, Ambient Devices, Skype and Velti. He sits on several boards, including Motorola (listed on the New York Stock Exchange) and Velti (listed on the London Stock Exchange). He is also on the advisory board of TTI/Vanguard. In August 2007, he was appointed to a five-member special committee with the objective of assuring the continued journalistic and editorial integrity and independence of the Wall Street Journal and other Dow Jones & Company publications and services. The committee was formed as part of the merger of Dow Jones with News Corporation.[8] Negroponte's fellow founding committee members are Louis Boccardi, Thomas Bray, Jack Fuller, and the late former Congresswoman Jennifer Dunn.