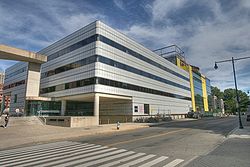 The MIT Media Lab (also known as the Media Lab) is a laboratory of MIT School of Architecture and Planning. Devoted to research projects at the convergence of design, multimedia and technology, the Media Lab has been widely popularized since the 1990s by business and technology publications such as Wired and Red Herring for a series of practical inventions in the fields of wireless networks, field sensing, web browsers and the World Wide Web. More recently it has focused particularly on design and technologies that address social causes.[1] The One Laptop per Child (OLPC) was one of the notable research efforts which grew out of the Media Lab.

The MIT Media Lab was founded by MIT Professor Nicholas Negroponte and former MIT President Jerome Wiesner (now deceased) and opened its doors in the Wiesner Building (designed by I.M. Pei), or the E15 building at MIT in 1985. It grew out of the work of MIT’s Architecture Machine Group, and remains within MIT School of Architecture and Planning.

The Media Lab has approximately 70 administrative and support staff members. Associate Directors of the Lab are Hiroshi Ishii and Andrew Lippman. Pattie Maes and Mitchel Resnick are co-heads of the Program in Media Arts and Sciences. The Lab's Chief Knowledge Officer is Henry Holtzman.

"Inventing a better future" is the theme of the Media Lab's work. A current emphasis of Media Lab research, which encompasses the work of several research groups, is on human adaptability. This focus was highlighted by the May 9, 2007 symposium h2.0: new minds, new bodies, new identities. The event was organized by Hugh Herr and John Hockenberry, and featured Oliver Sacks, Michael Graves, Aimee Mullins, Michael Chorost, Susan Hockfield, among other speakers. The day-long program featured work that is blurring the distinction between "able bodied" and "disabled," demonstrating technologies at the neural-digital interface. Work represented emphasized the merging of technology with bodies and minds, altering the conceptions of human capability. New research initiatives were discussed, such as techniques to treat conditions such as Alzheimer's disease or depression, to sociable robots for monitoring the health of children or the elderly, to the development of smart prostheses that can mimic—and exceed—the capabilities of biological limbs. The symposium provided many examples of work that is the next step in the so-called "digital revolution." Research projects at the Media Lab aim to have a deep impact on humanity at large. This work, while initially intended for those considered to be "disabled," will ultimately improve life for all humanity.

One of the founding focuses of the Media Lab was technology for the developing world, work that continues with projects such as the One Laptop per Child project and other work. Current projects at the Media Lab continue with this core value, which is expanded and enhanced by increased collaboration within the Media Lab itself, as well as across MIT and with the world at large.

A large number of research groups focus on topics related to human computer interaction. While this includes traditional user interface design, most groups working on this take a broader view. Several groups are working on adding sensors and actuators of different sorts to common objects in the environment, to create "intelligent objects" that are aware of their surroundings, capable of predicting the user's goals and emotional state, and so can assist the user in a more effective way.

The Media Lab also does research into integrating more computational intelligence into learning activities. This includes software for learning but also "smart" educational toys such as programmable bricks like Lego Mindstorms and the PicoCricket.[3] A number of groups are pursuing hybrid art-engineering projects, in developing new tools, media, and instruments for music and other forms of art.

Research at the Media Lab is creative. There is much hands-on building of demos and prototypes, which are then tested extensively and put through many iterations to see what happens when they are used.

The Lab’s primary source of funding comes from corporate sponsorship. The Media Lab is unique in that it is almost 100% industrially funded. Rather than accepting funding on a per-project or per-group basis, the Media Lab asks sponsors to fund general themes of the Lab; sponsor companies can then connect with Media Lab research in a way that is more spontaneous, but at the same time companies are guided by structured relationships with specific members of the Lab's faculty and research staff, who assist the sponsor companies in deriving the greatest benefit possible from their sponsorship of the Media Lab. The Media Lab is also exploring new methods for making a connection between sponsor businesses and Lab research.

In addition, specific projects and researchers are funded more traditionally through government institutions including the NIH, NSF, and DARPA. Also, consortia with other schools or other departments at MIT are often able to have money that does not enter into the common pool.

Companies sponsoring the Lab at the "consortium" level or higher can share in the Lab’s intellectual property without paying license fees or royalties. Non-sponsors are precluded from making use of Media Lab developments for at least two years after technical disclosure is made to MIT and Media Lab sponsors. The Media Lab generates approximately 20 new patents every year.

The Media Arts and Sciences program is a part of MIT's School of Architecture and Planning, and includes three levels of study: a doctoral program, a master's of science program, and a program that offers an alternative to the standard MIT freshman year as well as a set of undergraduate subjects that may form the basis for a future joint major. All graduate students are fully supported (tuition plus a stipend) from the outset, normally by appointments as research assistants at the Media Laboratory, where they work on research programs and faculty projects, including assisting with courses. These research activities typically take up about half of a student’s time in the degree program.

Work began on the building in mid-2007 and occupancy took place in 2009. Construction had been delayed for several years by funding issues related to the dot-com bubble.

Apart from the Media Lab, the building also hosts the List Visual Arts Center, the School of Architecture and Planning's Program in Art, Culture and Technology (ACT), and MIT's Program in Comparative Media Studies.

Media Arts and Sciences faculty and academic research staff are principal investigators/heads of the Media Lab's various research groups. They also advise Media Arts and Sciences graduate students, and mentor MIT undergraduates. "Most departments accept grad students based on their prospects for academic success; the Media Lab attempts to select ones that will best be able to help with some of the ongoing projects."[6]

Currently there are more than 25 faculty and academic research staff members, and two emeritus professors, Marvin Minsky and Seymour Papert.

There are several named professorships in the Media Arts and Sciences program:

A full list of Media Lab faculty and academic research staff, with bios and other information, is available via the Media Lab Website.[7]

The MPEG-4 SA project developed at the Media Lab made structured audio a practical reality,[8] the Aspen Movie Map (precursor to the ideas in Google Street View).

Large numbers of Media Lab-developed technologies made it into products, such as the LEGO Mindstorms and the LEGO WeDo and the pointing stick in IBM laptops, the Benton hologram used in most credit cards, the Fisher-Price's Symphony Painter,[9] the Nortel Wireless Mesh Network,[10] the NTT Comware Sensetable,[11] the Taito’s Karaoke-on-Demand Machine.[12]

Created collaboratively by the Computer Museum and the Media Lab, the Computer Clubhouse, a worldwide network of after-school learning centers, focuses on youth from underserved communities who would not otherwise have access to technological tools and activities.[13]

In January 2005, the Lab's chairman emeritus Nicholas Negroponte announced at the World Economic Forum a new research initiative to develop a $100 laptop computer, a technology that could revolutionize how the world's children are educated. A non-profit organization, One Laptop per Child, was created to oversee the actual deployment, i.e., MIT will not manufacture or distribute the device.

The Synthetic Neurobiology group creates reagents and devices for the analysis of brain circuits are in use by hundreds of biology labs around the world.

The Media Lab Web site has a section "Annual report to the president"[14] that shows major achievements on a year-to-year basis.