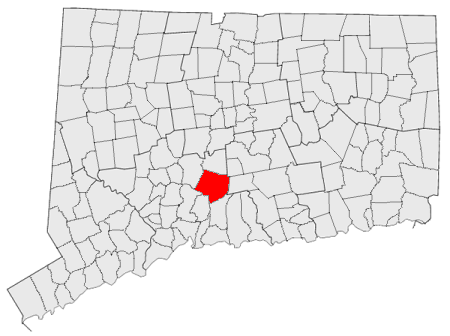 Wallingford was established on October 10, 1667, when the authorized the "making of a village on the east river" to 38 planters and freemen. The “long highway” located on the ridge of the hill above the sandy plain along the Quinnipiac River is the present Main Street in Wallingford. On May 12, 1670, Wallingford was incorporated and about 126 people settled in the town. Six acre lots were set out and by the year 1675, 40 houses stretched along today's Main Street. In 1775 and again in 1789, passed through Wallingford.

During the nineteenth century, Wallingford industry expanded with a considerable concentration of small pewter and Britannia ware manufacturers. By mid-century, Robert Wallace acquired the formula for nickel silver and established with Samuel Simpson, R. Wallace & Company the forerunner of Wallace Silversmiths. It was also during this period that many of the small silver and Britannia plants were combined to form the with its headquarters in Meriden, and several plants in Wallingford.

In October, 1871, Wallingford's train station was completed for the . Noted for its , ornamental brackets and stone quoins — the interlocking exterior corners — the station is among the few remaining of its kind that were built during President Grant's administration at the height of railway expansion. The town undertook an overhaul to the roof and exterior with the help of state and federal grants in the early 1990s. The station is served by the Northeast Regional route of .

Wallingford was the birthplace of (1800–1868), who would go on to found the ; singer ; conservative talk show host ; and Georgia governor and signer of the Declaration of Independence . It was also the childhood home of . The town produces its own electricity and maintains an electric company with rates well below the state's average.

The Town of Wallingford sits astride the Quinnipiac River in northern New Haven County. It is five miles (8 km) south of Meriden and about thirteen miles (19 km) north of New Haven. Situated in the Hartford-New Haven-Springfield corridor, Wallingford is traversed by , , State Highways Route 15 (), Route 68, Route 71 and Route 150.

Wallingford has diversified its commercial and industrial base over the past decade attracting high technology industries as compared to traditional heavy manufacturing. It is the home of a large variety of industries and major corporations spanning the spectrum of the medical, health care, service, hi-tech specialty metal manufacturing and research development.

's film includes scenes that take place in Wallingford; although not filmed in Wallingford 's character is portrayed as a young girl eager to leave her hometown. More recently, , a Wallingford resident, wrote and directed his first feature, , which takes place almost entirely in Wallingford. In addition, Mayor William Dickinson has a cameo appearance in the film as a bartender. Wallingford locations featured in the film include Trackside Pizza, Jake's Bar, , and an 1841 farmhouse situated on the east side of town.

There were 16,697 households out of which 32.3% had children under the age of 18 living with them, 57.3% were married couples living together, 9.0% had a female householder with no husband present, and 30.6% were non-families. 25.6% of all households were made up of individuals and 10.3% had someone living alone who was 65 years of age or older. The average household size was 2.52 and the average family size was 3.07.