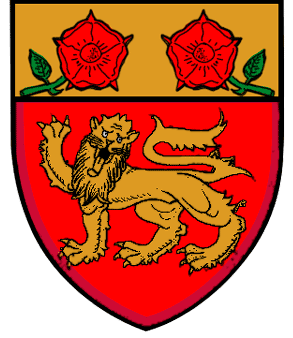 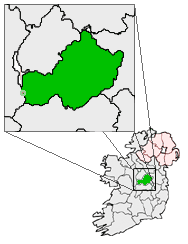 Athlone (lga|Baile Átha Luain|Town of the Ford of Luan) [P.W. Joyce, [http://www.booksulster.com/library/plnm/placenamesA.php] . Local historians describe it as "The Ford of the Moon"] is a town that lies on the near the southern extremity of , Ireland.

Athlone is located close to the geographical centre of Ireland, on the border of two counties, Roscommon and , which are located in the provinces of and respectively. Although the , which runs through the town, forms the historic border between County Roscommon and County Westmeath, the Local Government Act of 1898 designated most of the town as belonging to Westmeath, including areas west of the river. Much recent growth has occured outside the official town boundaries. Monksland for example, a suburb on the west side of the town, is not within the official town boundaries, yet is the most populous area of County Roscommon.

Athlone is the largest town in central Ireland; the 2006 Census having placed the population of the town and its environs at 17,544. This rises to approximately 35,000 within a 3 mile radius of the town. The town has also been described as "the commercial capital of the "

At the heart of Athlone, both and , is the . The ford of Athlone was strategically important, as south of Athlone the Shannon is impassable until (where the meets the Shannon), and north is . In 1001 Brian Bóru led his army from Kincora into the town, his fleet sailing up the river via to attend a gathering.

A bridge was built across the river in the , approximately 100 metres south of the current bridge. To protect this a was constructed on the west bank in the town by Turloch Mór Ó Conor. On a number of occasions both the fort and bridge were subject to attacks, and towards the end of the the constructed a fortification here. This was superseded by a stone structure built in 1210 by Justiciar John Gray. The 12-sided dates from this time. The rest of the castle was largely destroyed during the and subsequently rebuilt and enlarged.

During the wars that racked Ireland in the , Athlone held a vital position, holding the main bridge over the River Shannon into . In the (1641&ndash;1653), the town was held by Irish Confederate troops until it was taken late in 1650 by , who attacked the town from the west, having crossed into Connacht at .

Forty years later, during the , the town was again of central strategic importance, being one of the Jacobite strongholds on the defending their position after they had retreated west after the . At the first battle of Athlone in 1690 the Jacobite forces of Colonel Richard Grace repelled an attack by 10,000 men lead by Commander Douglas. The following year the saw a further assault in which the troops of King William III eventually prevailed against the outnumbered defenders.

It was proposed in the programme to make Athlone the of Ireland.

There are three in Athlone, [http://www.deancrowetheatre.com The Dean Crowe Theatre and Arts Centre] , [http://www.athlonelittletheatre.ie The Little Theatre] , and Company [http://www.passionfruittheatre.com] The [http://www.dramafestival.ie All-Ireland Drama Festival] takes place annually in Athlone, and brings together 9 amateur drama groups from across Ireland. The festival is supported by an active fringe which involves , , workshops and events for young people. Home to the famous "Skinsize Kings"

was born in Athlone and an annual festival celebrates this world-renowned .

The opened in October 2005, and is a project aimed at developing music education and services in the Midlands region.

Given its central location, Athlone is a natural hub for transport, with frequent bus and rail schedules. , which opened on , [cite web | title=Athlone station | work=Railscot - Irish Railways | url=http://www.railscot.co.uk/Ireland/Irish_railways.pdf | accessdate=2007-09-07] services the main to and Dublin to Westport/Ballina lines. , the national bus operator, operates from beside the train station and covers most towns and cities in the country, including an hourly service to Dublin and Galway. Other private operators also provide services to some towns and cities. Bus Éireann also operates a local Athlone bus service. The town is also home to a number of privately operated services, including the Flagline bus company. Taxi service is widely available throughout the area.

The town is situated on the N6 road connecting Galway to Dublin with various smaller roads connecting from other areas. The new M6 motorway now connects the town directly to Dublin, cutting traveling and commuting time considerably.

The runs through Athlone and the town is a popular spot for people passing through on , many of whom stop off at the . , the largest lake on the Shannon, is a short distance from Athlone to the North of the town, and is popular among , , and swimmers. The lake shore is easily accessed from , and . The town is also home to , whose clubhouse is located on the . The promenade is also a popular spot for anglers.

Athlone is the main centre in the Midlands, and "Golden Island Shopping Centre" attracts shoppers from a wide radius. There was also the smaller "Texas Shopping Centre" (formerly known as "Athlone Shopping Centre", prior to being acquired by the "Texas" chain). Another large scale development opened on November 1st, 2007. "Athlone Town Centre" comprises two internal streets, with 54 shops and a , and is the largest shopping and leisure centre in Ireland, outside .

is a facility (established May 2002) developed by the Town Council.

, located on the west bank of the river, is listed by the as the oldest pub in the British and Irish Isles.

Other popular attractions for visitors are the Glendeer Open Farm and the Viking Cruise of the Shannon. The town's tourist office is located at Athlone Castle, in the town centre.

Athlone is the regional centre for a large number of state and semi-state organisations. The Department of Education & Science, The , , Midlands Region, , , , and all have bases in the town. Athlone is also a major centre, Custume Barracks on the West bank of the Shannon is the headquarters of the Western Command of the .

(AIT) is the regional third level college. Athlone forms part of the ill fated , or triangle as it became known, along with and . Alongside Waterford's Institute of Technology, AIT harbours ambitions of attaining university status, as there is no institution providing university-level education in the Irish Midlands.

Between 1931 and 1975 the main centre for Irish radio was located at , Athlone. The original was 2RN (a wordplay on the song "Come back to Erin"). It subsequently became known as "Radio Athlone" and could clearly be heard throughout Europe, and as far as Moscow. This changed as bandwidth allocations were accorded at the .

It operated at a power of 60 kW (further increased to 100 kW in the 1950s). Many old radio sets in Europe had the "Athlone" dial position marked near the end of their tuning scales.

Moydrum was also the location of Ireland's short lived Shortwave international radio service that was closed down in 1948 due to lack of money.

A new radio station i107fm is scheduled to open in 2007. This station will be geared to the 18-34 age group in the midlands and north-east.

And again in affirmation of Athlone's broadcasting roots yet another station is about to be launched on a nationwide basis, using the 612 kHz band, with a Christian emphasis.

As well as this the Athlone Community Taskforce and several members of Roscommon community radio station RosFM have begun broadcasting from the Athlone area under the banner of the [http://www.athlonecommunityradio.ie Athlone Community Radio] on 101.6fm. The first broadcast was the 15th of March 2008 and is set to run every Saturday and Sunday for the following 15 weeks until the end of the temporary license they received. [ [http://www.athloneadvertiser.com/index.php?aid=2938 Athlone Advertiser ] ] [ [http://www.bci.ie/licensing/radio/temporary_services_apps.html BCI: Licensing: Radio: Successful applicants for Temporary services ] ]

Recently announced was the decision that Athlone will host the European Triathlon Championships in 2010. This is expected to bring 5,000 athletes for the event. [ cite web|url=http://www.waterwaysireland.org/index.cfm/section/article/page/SuccessfulTriath| title=Athlone Announced as Location for European Triathlon Championships2010| accessdate= 2007-11-09| Publisher= Waterways Ireland| ]