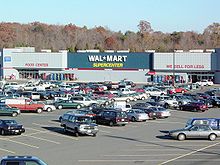 Chain stores are retail outlets that share a brand and central management, and usually have standardized business methods and practices. These characteristics also apply to chain restaurants and some service-oriented chain businesses. In retail, dining and many service categories, chain businesses have come to dominate the market in many parts of the world. A franchise retail establishment is one form of chain store.

The displacement of independent businesses by chains has generated controversy[who?] and sparked increased collaboration among independent businesses and communities to prevent chain proliferation. These efforts include community-based organizing through Independent Business Alliances (in the U.S. and Canada) and "buy local" campaigns. In the U.S., trade groups such as the American Booksellers Association and American Specialty Toy Retailers do national promotion and advocacy. NGOs like the New Rules Project and New Economics Foundation provide research and tools for pro-independent business education and policy while the American Independent Business Alliance provides direct assistance for community-level organizing.

In the U.S., chain stores began with the founding of The Great Atlantic & Pacific Tea Company (A&P) in 1859. By the early 1920s, the U.S. boasted three national chains: A&P, Woolworth's, and United Cigar Stores.[1] By the 1930s, chain stores had come of age, and stopped increasing their total market share. Court decisions against the chains' price-cutting appeared as early as 1906, and laws against chain stores began in the 1920s, along with legal countermeasures by chain-store groups.[2] 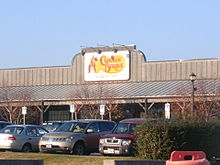 A restaurant chain is a set of related restaurants with the same name in many different locations that are either under shared corporate ownership (e.g., In-N-Out Burgers in the U.S.) or franchising agreements. Typically, the restaurants within a chain are built to a standard format and offer a standard menu. Fast food restaurants are the most common, but sit-down restaurant chains (such as TimberLodge Steakhouse, T.G.I. Friday's, Ruby Tuesday, and Olive Garden) also exist. Restaurant chains are often found near highways, shopping malls and tourist areas. They began in 1990.

Some small towns in the United States whose residents wish their distinctive character such as Provincetown, Massachusetts and other Cape Cod villages; McCall, Idaho; Port Townsend, Washington; Ogunquit, Maine; and Carmel-by-the-Sea, California closely regulate, even exclude, chain stores. They don't exclude the chain itself, only the standardized formula the chain uses, for example, there could be a restaurant owned by McDonald's which sells hamburgers, but not the formula franchise operation with the golden arches and standardized menu, uniforms, and procedures. The reason why they regulate chain stores is to protect independent businesses from competition.[3]