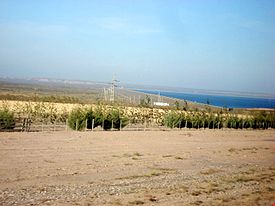 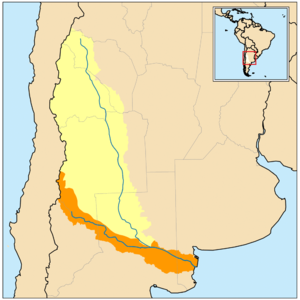 The Colorado River (Spanish: Río Colorado) is a river in the south of Argentina.

The Colorado river marks most of the political limit between the provinces of Neuquén and Mendoza, and between Rio Negro and La Pampa. The artificial Embalse Casa de Piedra dam was constructed both as an hydroelectric central and as a water lever regulator for the arid region the river crosses.

It has its sources on the eastern slopes of the Andes in the latitude of the Chilean volcano Tinguiririca (about 34° 48' S.), and pursues a general east-southeast course to the Atlantic Ocean, where it discharges about 100-120 kilometers south of Bahía Blanca, through several channels of a delta of the Unión Bay extending from latitude 39° 30' to 39° 50' S. Its total length is about 1,000 kilometres (620 mi), of which about 300 kilometres (190 mi), from the coast up to Pichi Mahuida, are navigable for vessels of up to 2 metres (7 ft) draft. It is nearly 2,000 km if calculated Río Desaguadero within.

The river has been usually described as being formed by the confluence of the Grande and Barrancas, but as the latter is only a small stream compared with the Grande it is better described as a tributary, and the Grande as a part of the main river under another name. After leaving the vicinity of the Andes, the Colorado flows through a barren, arid territory and receives no tributary of note except the Salado (or Curacó) from La Pampa Province, and is considered to be part of the ancient outlet of the now closed lacustrine basin of Urre Lauquen. The bottom lands of the Colorado in its course across Patagonia are fertile and wooded, but their area is too limited to support more than a small, scattered population.