Neuquén (Spanish pronunciation: [neuˈken]) is a province of Argentina, located in the west of the country, at the northern end of Patagonia. It borders Mendoza Province to the north, Rio Negro Province to the southeast, and Chile to the west. It also meets La Pampa Province at its northeast corner.

The Neuquén Province receives its name from the Neuquén River. The term "Neuquén" derives from the Mapudungun word "Nehuenken" meaning drafty, which the aborigines used for the river. The word (without the accentuation) is a palindrome. 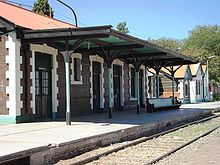 Inhabited by Pehuenches, the territory was not explored by the Conquistadores until late in the 17th century. In 1670 another priest, Nicolás Mascardi, founded the Jesuit mission Nuestra Senora de Nahuel Huapi. But the most important explorer was Perito Francisco Moreno who made several trips to Patagonia and made accurate descriptions of the area in his book "Viaje al Pais de las Manzanas", reaching Nahuel Huapi lake in 1875.

In 1879 Julio Argentino Roca started the Conquest of the Desert (Conquista del Desierto) that finally broke the aboriginal resistance. In 1884 Patagonia's political divisions were restructured and the Territory of Neuquén acquired its current boundaries. The capital of the province moved several times to Norquín (1884-85), Campana Mahuida (current Loncopué) (1885-1888), Chos Malal (1885-1901), and finally Confluencia currently known as Neuquén.

At the beginning of the 20th century the railway reached the city of Neuquén, and a new irrigation system was finished, facilitating the production and later transportation of crops. Petroleum was found in Plaza Huincul in 1918, giving Neuquén a new push forward.

Local politics have long been dominated by a single political party, the MPN or Movimiento Popular Neuquino founded by Elias Sapag, a prosperous businessman born in Lebanon.

Migrating to Argentina, the Sapag family arrived in Neuquén Territory around 1910 with the railroad, eventually making their home in Zapala, whose dry, fertile mountain valleys and orchards were reminiscent of their native Lebanon. Neuquén is rich in natural resources such as natural gas, petroleum, virgin forests and water resources suitable for electric power and tourism alike. These resources were formerly managed by the central National Government, which resulted in little local benefit at the time. Because of social unrest, Elias Sapag and two younger brothers, Felipe and Amado, started the MPN, an active political movement rooted in federalism and greater local rights over the territory and its resources.

The territory was made a province on June 15, 1955, and its constitution promulgated on November 28, 1957. Felipe Sapag soon became politically prominent. Although he was elected governor in 1962 representing the Movimiento Popular Neuquino, a coup against progressive President Arturo Frondizi that March prevented Sapag from taking office. Eventually becoming governor in 1963-66 and 1973-76, he presided over one of Argentina's fastest-growing provinces. The national government established the University of Neuquén in 1964, later incorporated into the new National University of Comahue in 1971. Removed as governor following the violent March 1976 coup against Isabel Perón, Felipe Sapag was returned to office in 1983-87 and 1995-99. His emphasis on public works and political independence from Buenos Aires have helped him and his successors with the MPN win every province-wide election since. His brother Elias Sapag became senator in 1963-66, 1973-76 and from 1983 until his death in 1993, becoming the longest-serving senator in national history. The MPN also elected Governors Pedro Salvatori (1987-91), Jorge Sobisch (1991-95 and 1999-2007) and current Governor Jorge Sapag (2007-11).

Neuquén has, since 1955, become a prosperous province with a high impact on the national energy supply and, as a growing tourist destination, outperforming most other provinces in the Patagonia region and in Argentina.

There are two main distinctive landscapes; the mountainous fertile valleys with forest on the west, and the arid plateau with fertile land only near the basins of the rivers on the east, mostly the Limay River and Neuquén River.

The weather is continental, and climate varies widely throughout the province. The northeastern regions are extremely arid, with spots that do not reach 200 mm (8 in) of precipitation yearly. There, summers can be very hot, with cool nights (average highs of 31°C (88F) and nights of 15°C (59F), sometimes reaching 40°C (104F)), and winters are relatively mild by Patagonian standards (average high of 11°C (52F), low of -1°C (30F), but sometimes reaching -10°C (14F) and below, with occasional snowfall). As approaching the Andes toward the west, precipitation increases and temperatures decrease: the foothills of the range see generally colder nights in the summer, and more frequent snowfall in the winter. The low valleys in the Southwestern part of the province receive up to 2,000 mm (80 in) of rain, with a marked rainy season in the fall and winter. Daytime temperatures average only 22°C (71F) in the summer, with nights down to about 6°C (43F)., in the winter, lows average -2°C (29F) and highs 6°C (43F) with temperatures of -15°C (5F) relatively common. Some valleys receive a direct moist inflow from the Pacific ocean, resulting in extremely high precipitation, up to 4,000 mm (160 in). Higher elevations are colder, with very heavy snows above 1,800 m in the north and 1,000 m in the south of the province, and temperatures well below -20°C (-4F) possible. Several summits are heavily glaciated, and on most Andean peaks snow may be found until midsummer.

El Chocón Hidroelectric Dam, the third most important in Argentina.

Neuquen is one of Argentina's most prosperous provinces, its estimated US$7 billion economy in 2006 (the country's eighth largest, despite its small population) generated a per capita income of US$14,700, Argentina's fourth highest and two-thirds above the national average.[1]

No province in Argentina, however, is as dependent on any one sector as is Neuquen's. Roughly half its output is accounted for by its mining and extractive sector, mainly on account of its massive gas and petroleum production, the most important in Argentina.

The province generates a significant part of Patagonia's electric power through the hydroelectric plants of Piedra del Águila, El Chocón, Pichi Picún Leufú, Planicie Banderita (in the Cerros Colorados Complex), and Alicurá. The town of Arroyito hosts the only heavy water plant in the country.

Another important activity is the production of apples, pears, peaches and others, specially in the Alto Valle area, shared with Río Negro.

The piquetero movement (organizations of unemployed workers) was born in Neuquén in the 1990s, during the presidency of Carlos Menem.

During the winter, there are the ski resorts in Chapelco, Cerro Bayo and Caviahue.

Many hike or fish, mainly for river trout, the lake district region of Southwestern Neuquén that stretches into Río Negro and Chubut Provinces.

There were a number of dinosaurs in the area, of which the bones of a 95 million years old Argentinosaurus are in dispay at the Carmen Funes Museum in Plaza Huincul.

The province is divided into 16 departments (Spanish: departamentos).

Legislature of the Province. 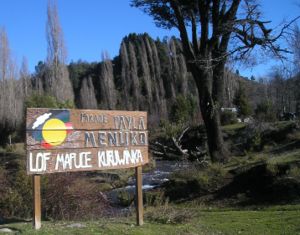 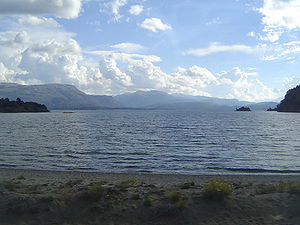 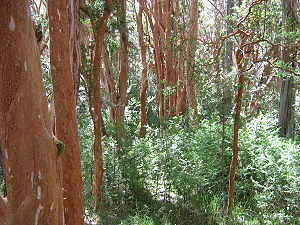